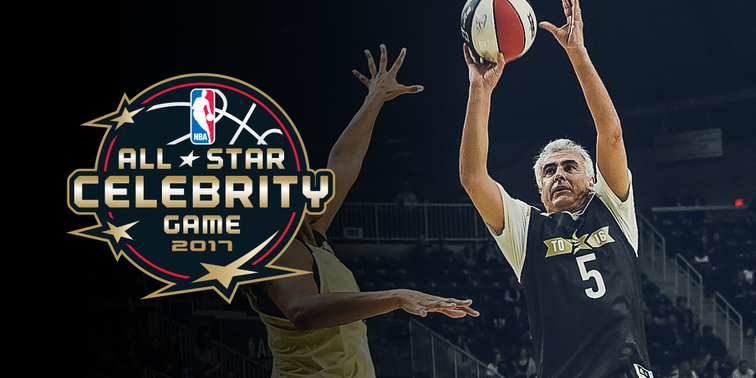 The NBA Celebrity All-Star Game is always a rewarding risk.

I raced home, almost losing my phone in the process, just to get back in time for the NBA All-Star Celebrity Game. Aside from the All-Star game itself, the Three-Point Contest and the Dunk Contest, the Celebrity Game is the most entertaining spectacle of the weekend.

This contest pitted realish celebs like Nick Cannon against indie celebs like last year’s MVP Win Butler and then mixed in some serious pseudo celebs like personalities from China and even a guy who outright impersonates basketball players on YouTube. This shit makes me miss Kevin Hart. And the game reiterated this sentiment.

The first note is the teams had too many coaches consisting of current basketball players, rappers, and ESPN color commentary peeps; it is not called a mess hall for nothing. The whole broadcast kept going to Draymond Green, who was wired for sound, and who was also always talking to some kid whose presence makes me think where the hell is his parents. Every All-Star party there is a random kid demanding airtime and headlines.

It seems like the NBA All-Star festivities are always in New Orleans. And it also seems like a few players want and deserve MVP status. This year, again, Win Butler scored the most points and rebounds. New comer caller woman, Michelle Beadle, was doing her best to insult everyone. We get it, Michelle, the celeb game ain’t serious, but let it be fun instead of deprecating.

Honestly, I fell asleep during the game. The NBA should try harder to get better celebrities. Let’s see Denzel Washington Vs. Allen Iverson,Vince Vaughn Vs. Will Ferrell, or Beyonce Vs. anyone. There is a chance, if the celeb isn’t pregnant, for the NBA to do a little bit better. Don’t get me wrong, I love the kid from Stranger Things, but I would rather a see a rapper who can play with a waistline small than Master P’s.

In the end, it is all about fun, but if I am falling asleep, just imagine how many people are changing the channel. This is the 15th anniversary of the celebrity game and I shouldn’t be falling asleep. The only thing that perked me up is the thought of Sage Steel cutting someone off, which of course didn’t happen because she was replaced by a snarky Michelle Beadle.

Last and least, how the hell was Brandon Armstrong the MVP? Sure, he had 16 points, but who the hell is he? He is a NBA player impersonator. Also, Win Butler played a way better game. I love watching stars play sports out of their comfort zones, but the NBA Celebrity All-Star Game is getting ridiculous. We need better celebs and better competition.