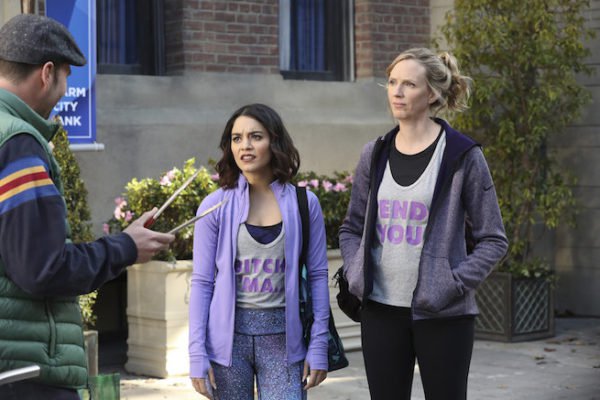 This week’s episode of Powerless season 1 focused on Emily Locke trying desperately to befriend Jackie. There were moments in this episode that served as reminders that Emily is the worst. Notably, when she said that she knew Jackie is busy with work and parenting so she signed her up for a class during her lunch break. Emily is a nightmare person and this show is only kind of aware of it.

But, for the most part the plot worked. Emily and Jackie play off each other well. The early beats of the plot were clunky, but by the end I was happy to see Jackie acknowledge Emily as her friend.

The scene that solidified their friendship was especially strong thanks to having some of the best jokes of the episode. When Jackie said that she wants someone who’ll care if she dies in her apartment, Emily asked, “What about your daughter?” Jackie replied, “She has an iPad.”

Meanwhile, the b-plot in which Van Wayne tried to figure out who used his private toilet was a serviceable plot that allowed the excellent supporting cast to do what they do. Danny Pudi’s Teddy and Ron Funches’ Ron continue to be gifts to television. The plot also gave Jennie Pierson’s Wendy more material. She’s a lot of fun and will hopefully get as many lines as the boys soon.

The twist ending reveal that everyone uses Van’s toilet all the time worked. In general, this episode featured tighter plotting than previous episodes, which is a good sign.

The best part of the episode was a running gag about a creepy hot dog stand guy. The male characters’ obviousness to show gross he is played really well. In a stand out moment, Teddy asked, “Creepy Tony the Hot Dog Guy? Oh, you mean Fun Tony the Hot Dog Guy.”