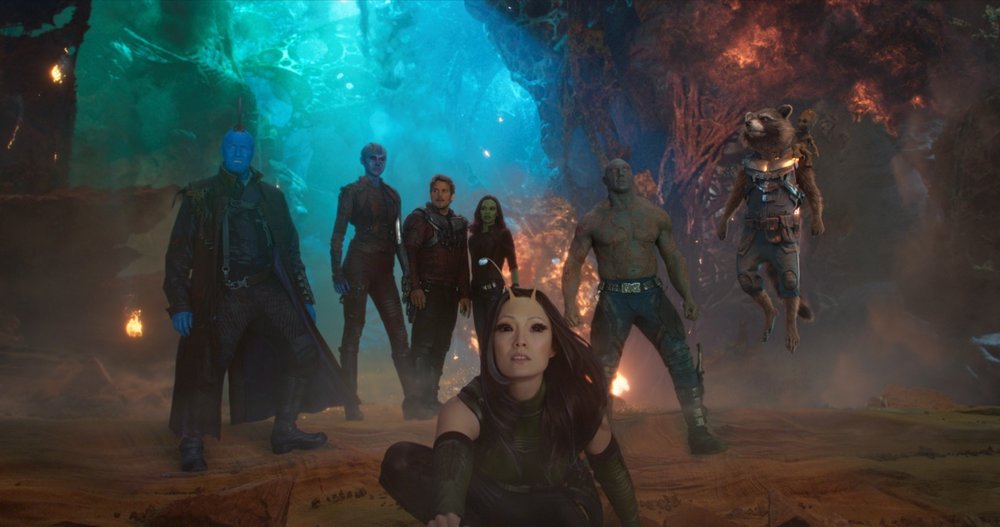 Guardians of the Galaxy took people by surprise in 2014, and James Gunn is bringing the band back together with Guardians of the Galaxy Vol. 2. This time around, the team is unraveling the mystery of Peter Quill’s father, a celestial being named Ego. He’s looking to make peace with Peter, and teach him about powers that he never knew he had. Chris Pratt, Zoe Saldana, Dave Bautista, Vin Diesel, Bradley Cooper, and Michael Rooker are all on board in this psychedelic space escapade about a dysfunctional family.

James Gunn directs a worthy sequel, with another inspired soundtrack, but he never quite touches the greatness of his first go with Star Lord and the crew. However, we get to dive deeper into each character, learning about what has shaped them, as the script is strong in the aspect of character development. Peter Quill’s relationship to his biological father, Ego, is a complex one, we’re given more insight as to why Rocket is a professional asshole, and get to know Yondu much better. We even get to discover the details of why Nebula, a seemingly one-dimensional character in the first flick, is so full of rage.

There’s a side plot with aliens that look like a combination of the Metropolis robot and the Oscar statue, and almost every time they were onscreen they offered little to the scene. Cutting a majority of their screen time out would’ve made for better pacing.

Guardians of the Galaxy Vol. 2 is funny, even hilarious at times, but there are a few jokes that don’t hit their marks as well as Gunn might’ve hoped. There are instant classic lines, like the Mary Poppins reference, or pretty much anything that Drax says, but a few lines fall a bit flat. The action is entertaining, and visually captivating, as CGI is used with creativity. The emotional punches are there, as we get to see characters redeem themselves and stand up for what’s right without skipping a bit, and that’s what Gunn does best; he makes you care about the characters, which allows you to feel for their heroic acts.

Chris Pratt continues to portray Peter Quill/ Star Lord as a relative character with a good balance of heart and humor. His pivotal realizations in this film allow him to grow into more of a leader. Peter’s “unspoken” relationship with Gamora, performed  with tenacity by Zoe Saldana, is also interesting, as they play the “will they or won’t they?” game throughout.

Saldana also gets to flesh out her character more in terms of dealing with her sister, Nebula, as Karen Gillan gets to be more than just a rage monster. Rocket, voiced wonderfully by Bradley Cooper, is devilishly funny, and Baby Groot is cute, plain and simple. Dave Bautista as Drax is the most comedic of the bunch, and also gets to show off his dramatic acting chops, even if its just for one scene.

Without a doubt, Michael Rooker as Yondu is the standout of the show. He’s a man of selfish mistakes, looking to do some right after he loses everything. Rooker rocks as Yondu, sporting a fin-mohawk with a whistle that kills. He owns the role and has the most effective character arc of the team. Kurt Russell, playing Ego, does very well, especially considering that he’s given a lot of expository dialogue. Russell is as charismatic as Pratt, and is always engaging in every scene; he succeeds in playing such an elaborate character.

Guardians of the Galaxy Vol. 2 is a hilarious sequel that develops its characters well, while not having the greatest plot. Once again, despite being a Marvel comic book movie, this film portrays what family is: people that have each other’s back despite the odds or the level of crazy. It’s a kick-back action film with some heart.

Kurt Russell as Ego is without a doubt one of the better villains in the Marvel cinematic universe. He’s up there with Loki as a villain that is fleshed out and charismatic. There was a Darth Vader trying to bring Luke to the dark side vibe that worked quite well in this film. The center of the planet looking like a human brain was kind of silly though, and the reveal might have been better if it was something other than Mantis holding back a secret.