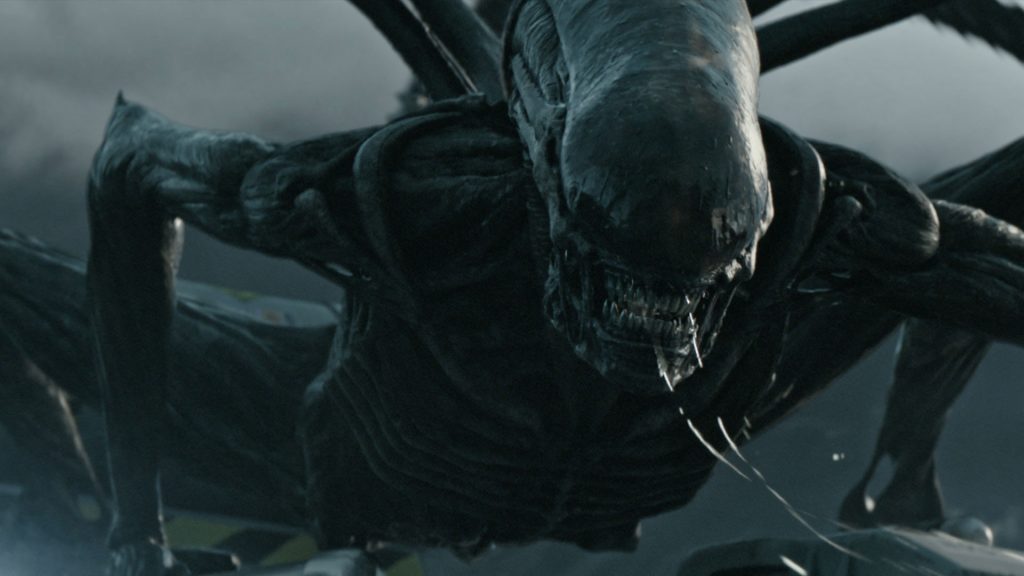 Ridley Scott returns to the depths of space to bring back the perfect organism in Alien: Covenant. A colony ship is set to venture off to the far side of space, but discovers a planet closer in proximity that seems to be uncharted paradise; however, what they find is far from it. The film stars a talented cast, including, Katherine Waterston, Billy Crudup, Danny McBride, and Michael Fassbender.

Questions. There are plenty of questions in Prometheus, and Ridley Scott leaves us with plenty of questions in Alien: Covenant as well. Some of them are thought-provoking, but others leave us wondering about certain details of the plot. Having said that, this film is entertaining, and does make some bold decisions as to the origin of the Xenomorph.

Ridley Scott creates amazing visuals in this film that linger in our minds. Some of the set pieces seem to come from the dark corners of Scott’s nightmares, and it’s a wonder to see. The gore gushes onto the screen with scenes that are satisfyingly horrific. Scott knows how to create tension, and he reminds us in this film. It is truly a welcoming sight to see the Xenomorph back on the silver screen.

The script is bold enough to balance an interesting discussion of creation and the worth of humanity with a Sci-Fi horror show, and it succeeds more than fails. The film does hold together well, despite having many ideas plugged in, but the studio seems to have chopped some parts away. There are some deleted scenes that could’ve strengthened our investment in the characters more.

The cast does a solid job in this film, even though some are just throwaway characters; however, there are three performances that make this movie. The first comes from Katherine Waterston, who plays Daniels, a crew member that does her best to do what’s right despite tragic circumstances. She makes for a solid heroine who is motivated to choose to rise to the occasion when the face-huggers start flying.

Surprisingly enough, Danny McBride gives the best performance of his career in this Alien prequel. McBride plays Tennessee, a pilot that’s a bit of a cowboy and a drinker. He doesn’t do his schtick here, as he’s quite toned down, but he still manages to be funny.  He even shines in some of his more dramatic moments in the film.

The star of the film is Michael Fassbender, playing Walter, an android that is an upgrade to David, the version we see in Prometheus. Fassbender has been dealt a complex hand, and he relishes the spotlight, conquering the challenge of playing the many sides of an android. If you thought he did well in Prometheus, he does an even better job in this film. Each move he makes and word he utters is motivated. One moment he’s a hero, and the next he’s this eerie creation that one can’t be too sure of. The most thought-provoking scenes involve Michael Fassbender.

Alien: Covenant doesn’t do anything groundbreaking, and there are questionable plot points, along with throwaway horror movie characters with deaths that are telegraphed, but it boasts an interesting evil, practical effects, amazing set pieces, and driven performances. It definitely ignites interesting conversations about creation and the worthiness of the human race, while giving us the blood hungry xenomorph in all its glory. For what it’s worth, this is the third best Alien film in the franchise.