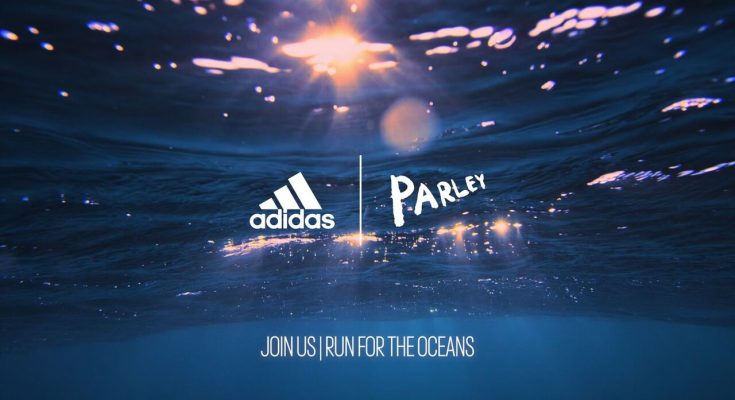 adidas and Parley for the Oceans announced their first global initiative with the launch of adidas x Parley Run for the Oceans, a global celebration that will take place during World Oceans Day week (June 5-11).
adidas, Parley for the Oceans and Runtastic have come together, harnessing the power of sport as a catalyst to inspire positive action, and motivate people to get behind the cause, with each step spreading awareness of the threat plastic pollution poses to the oceans. adidas x Parley Run for the Oceans enables all athletes to unite through running and become part of the clean oceans movement that can make a difference in everyone’s lives, by taking part in a series of inspiring physical, digital and audio runs.
Digital Run: Everybody can become an ambassador for the oceans and join the global movement by taking part in the digital run. Between June 5 and 11, runners from around the world will virtually unite to show their commitment to ocean health, one mile at a time. As they run, people can listen to a dedicated Story Run and learn about the ocean’s delicate ecosystem, the Parley AIR strategy and how they can all be part of the solution. Runners can contribute their mileage and help spread the message by registering for the free digital run here. Those who register and run at any time during this week, accumulate miles and can see how those miles are adding up to the ones run by all runners around the world joining the movement.
NYC Run: On World Oceans Day, adidas x Parley’s first-ever Run for the Oceans will bring their communities of runners, ocean ambassadors, environmentalists, artists, influencers and media together, to inspire collective action and affect positive change in the world. Taking over New York City at night, a collective of over 500 runners will take part in a 5K run illuminating the city streets with blue lights as they go, taking a stand for the conservation of our oceans.
Audio: To truly galvanize action through sport, and raise awareness by inspiring the masses to commit to the oceans, an innovative Runtastic Cardio App feature has been created. This Story Run, curated by a team of ocean advocates, is based on unconscious interval training and serves as an ongoing source for raising awareness of the cause.
Of the landmark event, Eric Liedtke, Executive Board Member of adidas AG, Global Brands said: “adidas teamed up with Parley to help spread awareness and transform ocean plastic pollution into high performance sportswear, spinning the problem into a solution. The thread, into a thread. We have already taken the first steps to reduce and ultimately eliminate virgin and single use plastic from our products.  In doing so, we have shown that it is possible, and that people care – but now we must accelerate and scale. As a creator brand, we believe that necessity drives innovation, and that solving the toughest problems only makes us and our products better– all while doing less harm to the world.”
“Our efforts won’t stop with product – we want to create a global movement to help save the oceans from the threat of plastic waste. At the heart of our brand is the belief that through sport, we have the power to change lives. With the Run for the Oceans, we’re using this power of sport to inspire action. It is about community and participation in sport – but moreover, we have created a platform that gives athletes all over the world the opportunity to get involved with the cause, helping us to fulfil our promise.”
Cyrill Gutsch, Founder of Parley for the Oceans commented: “Run for the Oceans is a celebration, a moment of reflection, a peace parade — an opportunity to be mindful of every breath we take and thank the life in the magic blue universe that provides it.”
To find out more about how to take action to raise awareness for the cause visit and sign up at adidas.com/runfortheoceans. Follow the conversation at @adidasrunning on Instagram, Twitter and Facebook using #adidasParley and #RunForTheOceans.