Keir Burrows is an aspiring, up-and-coming director that has made a rather intriguing film called Anti Matter. The  Sci-Fi film follows an Oxford PhD student named Ana, who is conducting experiments to create a wormhole. After taking the risk of traveling through the wormhole, she finds herself unable to make new memories, as she desperately struggles to find out what exactly happened. The film stars Yaiza Figueroa, Philippa Carson, and Tom Barber-Duffy. Burrows took some time to talk to Hardwood and Hollywood about his film, as well as the filmmaking process.

Hardwood and Hollywood: Anti Matter has an interesting take on man using science to play god. How did you come up with the concept for writing the script?

Anti Matter started out as a short film script called Worm that I wrote around 2011, and that was what would be the opening salvo of the feature – where students are on this fast journey of discovery, fueled by their own imagination and excitement at the implications of their discovery. They cut corners – and things go wrong. So the idea wasn’t born so much as from a playing god point of view, but from a more normal getting carried away. In Social Network, where he’s enthusiastically inventing Facebook? It’s that story, except of course mine is Sci-Fi, so the ‘things go wrong’ moment is more inventive.

HH: This a very ambitious film with a limited budget. How did you go about making your ideas on paper work? Did the script change at all throughout the filming process?

KB: Yes, it’s stupidly ambitious. It really is. We did literally everything you aren’t supposed to do on a micro-budget feature. So the main decision we took that allowed us to do it was to break the shoot up into loads of ‘short film’ size chunks. We’d do a day here, a weekend there, on and off over the course of a year. That was the only way it could be done. And people will sacrifice a lot to help out for a day at a time. As to the script, hell yes. I couldn’t even tell you how many drafts there were. Forty? Fifty? Including three or four major rewrites. Ideas need to percolate, y’know? It’s not possible to just come up with all the good stuff in one sitting. I mean my main character in draft one was an English guy called Tim. By the shooting script it was a Puerto Rican woman called Ana, and we had scenes set in Florida. We added a lot in post too, adding lines in ADR, fixing things, to clarify plot points. 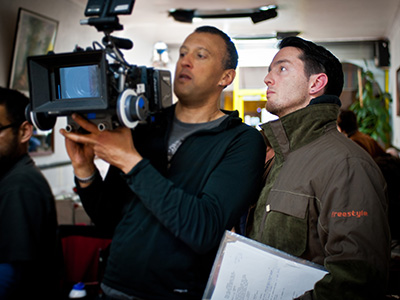 HH: Anti Matter is reminiscent of films like Primer, Moon, and even Memento. Did you look for inspiration in any films in particular?

KB: You have just listed, absolutely, the three main influences on Anti Matter, on the script anyway. Well done! Those three, and Social Network. Then also films like Another Earth. But yes, Primer was the main inspiration here, seeing how far a strong idea can go, without budget.

HH: The few quiet shots at the end of the film are intriguing. Will you continue to explore the world of Anti Matter or do you have other projects in mind?

KB: I mean look, never say never, but I don’t think it’s a film that necessarily asks for a sequel. It’s about – in my mind anyway – the philosophical questions, the what makes a person real, might we have a soul, nature of humanity stuff. The plot itself is secondary. I mean there’s potential, but if I did a sequel I’d prefer to do it down the line, hopefully with a bigger budget, and do it far removed from the first story. A tangential sequel, so it’s not actually about anything that happened in Anti Matter, but it’s set in a world that springs from the science in this story. So maybe set in the future when all the effects of teleportation they discuss have come to pass. When I get to do my Interstellar or whatever, perhaps the wormhole devices will be named after Ana Carter in Anti Matter, but find a completely new story to tell, with its own depth, using that world? But for now, no, definitely other projects.

HH: What was the most difficult part about making Anti Matter? Do you have any tips for the aspiring independent filmmakers out there?

KB: The sacrifices, time, money, all of that. Making Anti Matter ate a big chunk of my life. I honestly don’t believe – even if my wildest dreams come about and I have a Nolan-like career (lol) – that anything will ever cost me as much, mentally and physically, as making Anti Matter did. When you have no money, but you want to make something great, you really will bleed for it.

Now, tips for aspiring filmmakers. I have loads, but here’s the big one. It’s hard!

Unless you come from a wealthy background, life is gonna be tough. Don’t bank on a sudden breakout movie, that’s not going to happen. BUT it is a big enough industry so that hard work (crazy hard work) and persistence and a modicum of skill means you stand a good chance of getting into it. Maybe not in the role you first hoped for, but it’s all about finding your place anyway. So try to find work, in the industry, somehow. Make your wage in film, even if it’s as someone’s assistant’s assistant. Then get a second job. Save every penny you can. Save like mad. Live like a pauper. You need money to make a movie and if you ain’t rich, if your friends aren’t rich and you can’t kickstarter your way, you’ll need your own money. Help your friends make their films and they’ll help on yours. And if your friends aren’t filmmakers, find new friends. And every second you get, write, write and write and if you’re not a writer, find one, fall in love, and marry him or her. Partner up, basically. You can’t do it alone. And then yeah, go out and get filming.

I know every director advises this, but it’s the simple truth. You need to practice. You’ll make 300 awful things before you make something good. Write and shoot simple dialogue scenes. Shoot silly action sequences. Make dumb horror moments. Practice. Then make short films. Tell whole stories. Then, after you’ve done a lot of those, and you think they’re getting good, make one that you’ll send to festivals. And after more of this, and you’re going to festivals around the world, and you’re feeling confident in your skill and you know you can hold an audience – then make a feature. And above all – remember it’s a long game. If you’re 21 and you think you’ll be a paid feature film director in five years, you won’t. But, if you’re willing to slog away for 15, 20, 25 years, you never know when your break will happen. And lightning might strike and you’ll be winning Oscars like Damien Chazelle. Who knows! Crazier things have happened. It’s a long game. Lol I’ve exhausted myself with that, good grief– study law instead.

HH: Thank you for your time!

KB: Thanks for having me!