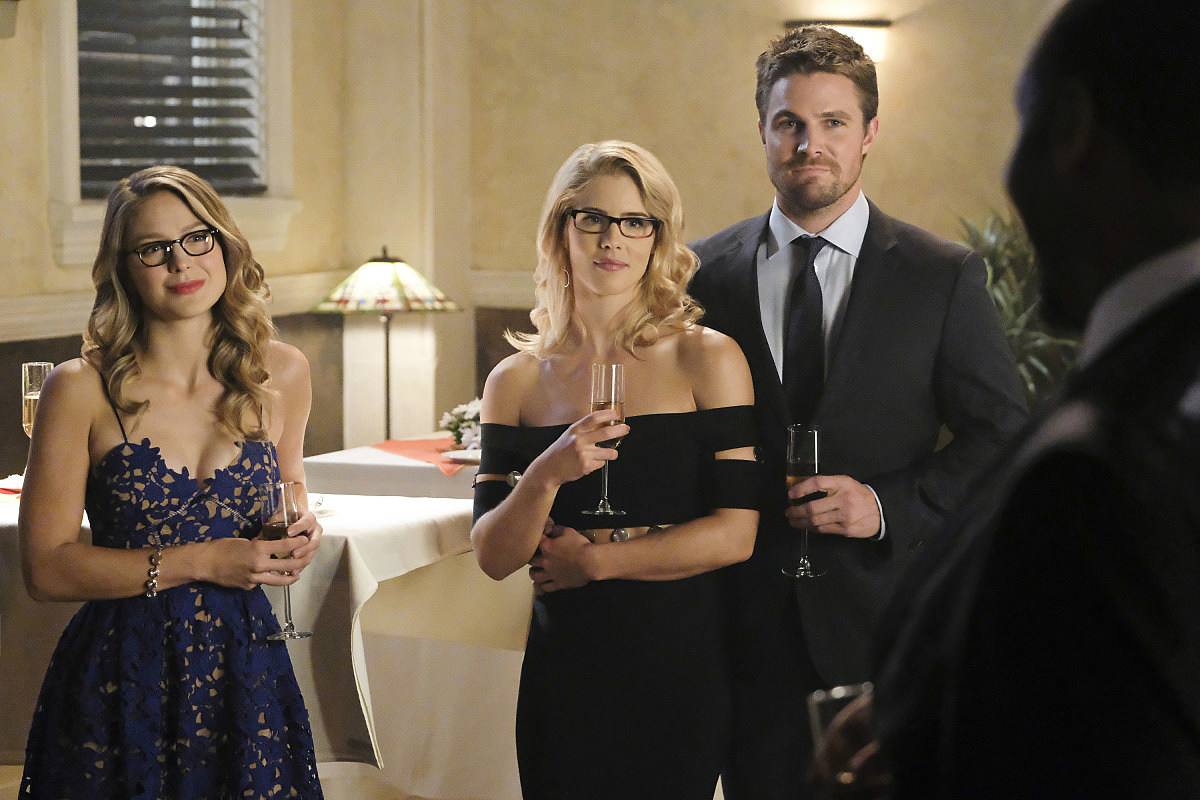 This week’s episode of Supergirl season 3 was fundamentally a bad idea. The very first shot in the episode was a big building decked out in swastikas. I’ve been following news about this crossover, but I still found the imagine jarring. I can’t imagine what it must’ve been like for casual viewers tuning into this family show.

This opening image took place on “Earth-X.” As Harry Wells explains in the episode, scientists didn’t even number Earth X. It’s a world in which the Germans won World War II and Nazis remained in power ever since. This premise allows every character to deliver lines about how they hate Nazis and punching Nazis is satisfying.

But, everything about this premise distances present day America from Nazis. Everything in the scene about Earth X underlines one idea: American values beat out Nazis 50 years ago. If the writers of Supergirl actually wanted to take a stand, they could have their heroes fighting against Nazi ideals here and now. The Nazi aesthetic creates an easy shorthand to establish a big bad evil. The episode stripped away antisemitism and racism from Nazi ideology. The message isn’t that antisemitism and racism are bad. It’s a completely hollow “Nazis are bad.” This completes the illusion that present day America thoroughly, diametrically opposes these villains.

I acknowledge that Supergirl and the other shows involved in this crossover take place in an alternate world. Maybe they aren’t seeing American neo-Nazis featured in newspapers or reading about neo-Nazi marches in Europe. But, even if theoretically these characters actually live in a world where Nazi ideals aren’t rampant in the present day, this is still a problem. Because creating such a world is a choice on the writers part. Either way, the result is the same: they’re pretending these ideas are firmly in the past. Asking viewers to watch Kara Danvers be a Nazi like this is simply a fun exploration is absurd.

Supergirl season 3 threw in an inexplicable “build a wall” reference while drawing a direct line between being Mexican and being homophobic. They brought up the Flint water crisis just to blame the entire problem on “red tape.” This season constantly shoehorns in damaging topical references. Supergirl wants so badly to seem vaguely progressive while absolutely refusing to take an actual stand. This episode is simply the most extreme example.

The most positive thing about this episode is that there’s a good chunk of time before the Earth-X invasion actually happens. For an enjoyable amount of time, you’re just watching the characters attend the wedding of Barry Allen and Iris West. This part of the episode gives us the things I want in a crossover: heart-to-hearts that offer a different perspective, crossover banter and fun hookups. Specifically, Alex Danvers had a one night stand with Sara Lance. That’s what I want from a crossover. Predictably, Alex didn’t genuinely have fun with Sara. Instead, she immediately regretted it and reaffirmed that she only ever wants to be with Maggie Sawyer. Television requires gay characters to be with their first lover forever.

There were a lot of great interactions in different combinations in this episode. It’s weird that Caitlin Snow and Martin Stein’s friendship felt deeper and more genuine on this show than on The Flash or DC’s Legends of Tomorrow. I loved Martin and Jefferson Jackson turning to Harry and Cisco Ramon for help separating Firestorm. This is a major plot point on Legends. Resolving it on Supergirl, by characters who are on The Flash, felt like a turning point into DCTV fully deciding to leave people who only watch one of their shows in the dust. That might be the wrong choice, but it does make the crossovers flow better.

The episode also included a mysterious cameo by Jessica Parker Kennedy of The Secret Circle. She played a caterer who spoke to Barry with a suspicious amount of bubbly enthusiasm. Since Jessica Parker Kennedy looks like a perfect cross between Candice Patton and Grant Gustin, the logical conclusion is that she’s Iris and Barry’s daughter from the future. It’s unclear if this was meant to be a fun standalone easter egg or a set up for something. Either way, it’s yet another thing that was odd to have in an episode of Supergirl and shows DCTV is all in on expecting audiences to be invested in all of their shows.

The one thing the episode was missing was more interaction between the members of the West family. Haven’t we earned at least one heart-to-heart between Iris and her father and brother? They probably could’ve cut Kara’s song for that, right?

As always seems to be the case, this crossover overemphasized Oliver Queen’s relationship with Felicity Smoak. I like Oliver and Felicity together, but the way the show treats them can be exhausting. Every character chimed in on how much they love Oliver and Felicity’s relationship, for some reason. I loved the scene of Oliver clumsily proposing to Felicity and her surprising him by saying no. That actually felt genuine. But, the show treated this conflict as far more dramatic than it is. Oliver wants to officially get married. Felicity doesn’t want to make it official, but is fully ready to commit to him for life. The stakes could not be lower. But, we’re asked to feel heavily emotionally invested in whether or not Oliver and Felicity enter a legal contract.

As a side note, Ray Palmer and Ralph Dibny were both inexplicably missing from the wedding. The idea that Barry invited Mick to his wedding, but not Ray and Ralph to his wedding does make me laugh. But, it’s probably an oversight on the show’s part and not Barry making a power move.

The fight choreography after the invasion at the wedding had some standout moments. Oliver and Cisco had a particular well-coordinated team up move that made me wonder if they’ve been secretly fighting bad guys together and not inviting Barry.