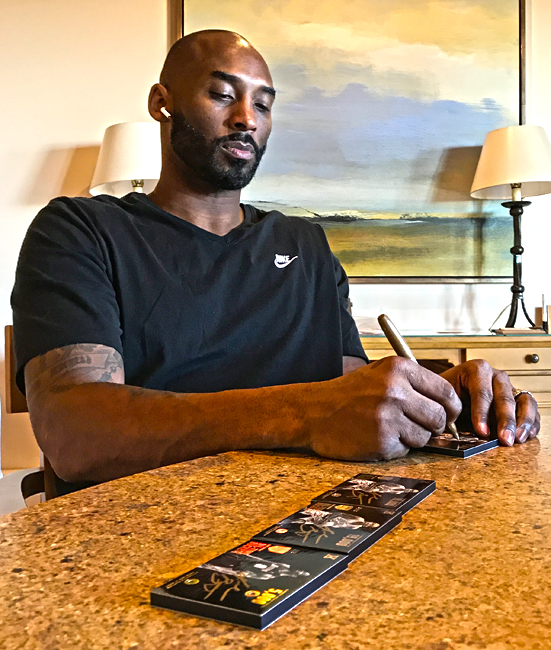 Brought to you by our friends at Panini.

For the last few weeks, the sports collectibles industry has been buzzing about Panini America’s upcoming Kobe Eminence product that honors the historic career of Los Angeles Lakers superstar and NBA icon Kobe Bryant. Prior to the initial product announcement and Monday’s dual-jersey retirement ceremony, Panini America’s Brian Bayne and Alex Carbajal spent some quality time with Bryant in the Sunshine State for a monumental three-day signing session centered around the upcoming Kobe Eminence release.

As Bryant poignantly delivered his indelible ink on a stunning array of Eminence jaw-droppers (cards embedded with diamonds, gold and platinum, five-fold booklet cards and so much more), the Black Mamba discussed just a few of the defining moments highlighting his epic career in a series of exclusive Panini America interview shorts –true must-see stuff that can be viewed after the jump.

Kobe Eminence is slated to release next month and is quite literally unlike anything ever created in the world of trading cards — and it’s been in the works for months with extensive personal input from the Black Mamba himself. Each nine-card Kobe Eminence box includes eight Bryant-autographed cards and one card featuring an ounce of gold or platinum. Each box also includes a hardcover, Kobe-signed coffee table book featuring images of every card in the set.

We’ll have much more on Kobe Eminence in the coming days right here on The Knight’s Lance. But for now, check out what Kobe himself has to say about a collection that’s as unique and as spectacular as the player it honors.