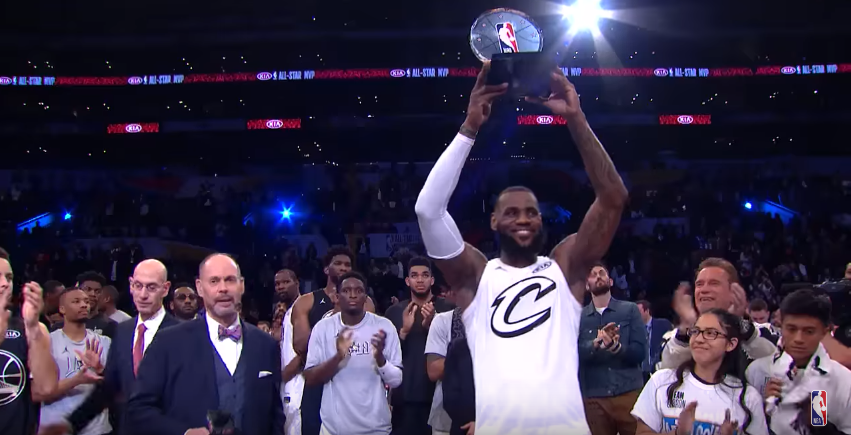 Team LeBron trailed Team Steph during much of the NBA All-Star Game. In the end, however, lockdown defense as time expired and late-game execution helped LeBron James and his squad take the 148-145 victory.

The All-Star MVP honors rightfully went to James. He finished with 29/10/8 line on 12-17 shooting. Team LeBron went 51.7 percent from the floor and 32.8 percent on triples. Balanced scoring helped propel them to victory – Kevin Durant had 19 points, Paul George had 16, Andre Drummond and Bradley Beal each had 14, and Kyrie Irving had 13.

For team Steph, they shot just 44.4 percent from the floor and 26.2 percent on threes. There were some atrocious offensive performances, in particular from Steph Curry himself and James Harden. The pair combined to go 5-24 from three-point land.

DeMar Derozan put up 21 points and Joel Embiid had 19 for Team Steph. Damian Lillard came off the bench to pour in 21 of his own, while Klay Thompson also thrived in his bench role with 15 points (5-10 from deep). Karl-Anthony Towns was strong early and finished with a 17/10 double-double.

James and his teammates raised their defensive intensity as the game neared its finish. As team Steph attempted to put up a three-pointer to tie the contest late, it was James, Durant, and a slew of active bodies who prevented any decent look from being possible.

For all of the talk from the announcers about this game featuring greater defensive focus, it wasn’t exactly a gem to observe. Both teams went through periods of tremendous struggles from deep. There were also the expected head-scratching turnovers that stemmed from trying to make the spectacular play.

All that said, the idea of having team captains choose their lineups was a welcomed change. The East/West battles had clearly gotten stale as All-Star games were becoming worse by the year. Even if this year’s showing wasn’t a marvel to watch, at least the league attempted to address the issue and was partially successful.