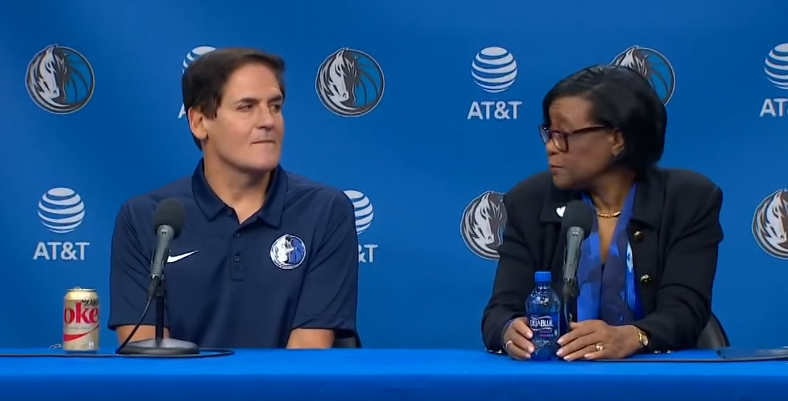 There was a palliated musk hanging over the American Airlines Center event level on Monday afternoon. Palliate in a sense that something had been urgently bought at the cost of a few souls, but everything still seemed stagnate and stale in the air of the broad corridor. The members of the press roamed with a quick pick-up in their steps, eagerly speaking of the hiring of interim CEO Cynthia Marshall, a former AT&T executive with more than 30 years of telecommunications experience under her belt. However, members of the Dallas Mavericks staff, with their distinct badges that they once wore with a sense of beaming pride, appeared less polished. Some were careful in their tip-toeing, careful with the regurgitation of their words. Others stood tall and focused despite the looming shadow befalling them.

It was one strange afternoon.

It has been a week since Sports Illustrated struck a match and tossed a Molotov-cocktail into the window of the franchise, a week since former team president Terdema Ussery had been slammed with sexual misconduct allegations, a week since Mavs.com insider, Earl K. Sneed, had been fired after it had been revealed he was involved in two domestic assault cases.

The past few days have been ones lined with curious flip-flopping and the backtracking of certain words (*waves to owner Mark Cuban*), while some of the senior members of the long-standing media stood in the locker room and avoided the “big” questions – questions that would threaten their very existence since they were so far up management’s ass they could taste food not yet consumed. Instead, they joked about shoes. Or wrote flagitious articles that randomly name-dropped and ended with nonchalantly writing a line that alluded to alleged child molestation at the hands of a local scout (without going into detail and treating the line as an afterthought… seriously).

It’s more than safe to say that the NBA is arriving late to the #MeToo movement, and they’re arriving on the back of the mossy bandwagon of the Mavericks’ scandal as it crashes at full speed into a brick wall composed of loud silence. The question is, would the NBA even have approached the movement if it hadn’t been for that specific Molotov cocktail? The professional sports world should be the most obvious place to fulminate when it comes to sexual misconduct since women in the industry are constantly battling the “man’s world” so-called shibboleth.

While some are saying that the hiring of Marshall comes on the clumsy heels of panic, Marshall herself is stepping up to the plate with a sense of urgency, seriousness, and care. “The process failed somewhere,” she said as she sat next to Cuban in the interview room. “I don’t know why it failed. And so that’s what we have to dig out. So I will be meeting one-on-one with every single employee of the organization.”

The press conference was mirthful; but, quite frankly, it just seemed like highlighting the cheekbones of a rotting corpse. Cuban softly shut down questions that more than deserve answers in order to keep the primary focus on Marshall as he addressed the Dallas press at home for the first time since the scandal broke.

“Today’s not the time for me to talk about anything,” Cuban expressed.

Seems that Mr. Cuban is so far removed from the #MeToo movement, he doesn’t seem to understand that it’s staring him dead in the eye and he needs to answer the questions of the press and the Mavericks fanbase.

I have no doubt that Marshall will get things done and the atmosphere will shift, but is that only because the entire world is watching? Or is it as head coach Rick Carlisle so elegantly put it: “She’s intolerant of any bullshit. It’s pretty clear.”

I hope for the sake of women in sports, it’s the latter.