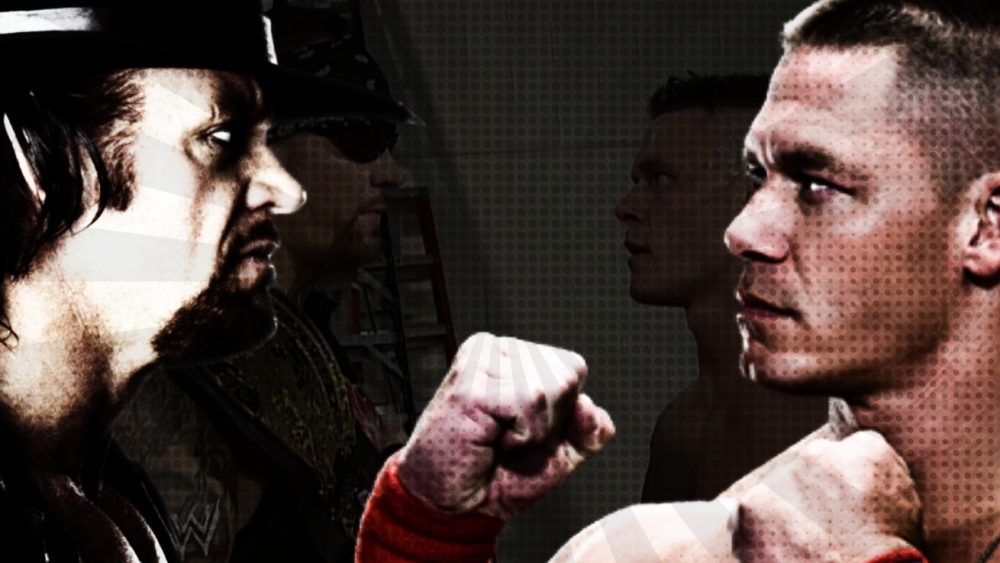 Although it hasn’t been announced yet, this Sunday John Cena and The Undertaker will face off in a one-on-one match at the WWE’s 34th annual WrestleMania pay-per-view. Frankly, I couldn’t be more excited for it and I say this knowing that I’m likely in the minority; there doesn’t seem to be all that much excitement about this “dream match.” The Undertaker is one-thousand years old and recently streak-less, and fans have “Cena Nuff” for the better part of a decade now. But I’m a sucker for nostalgia, and for the belief that maybe, just maybe, this has been the best and most unlikely example of long-term storytelling WWE has ever pulled off. More likely, it’s just been coincidence and dumb luck, but that won’t stop me from examining how the WWE has finally arrived at this once highly anticipated John Cena/The Undertaker match 16 years, or more specifically, 5,764 days later.

On the final Smackdown of June in 2002, John Cena made his TV debut for the WWE’s main roster, challenging Kurt Angle and declaring that he possessed the “Ruthless Aggression” Vince McMahon had begged his roster to show just a few nights earlier on Monday Night Raw. Cena was defeated in that match by Angle, but his performance drew raves reviews both in real life and in a backstage segment where Cena was congratulated by Ron Simmons, Rikishi, Billy Kidman, and to the surprise of most wrestling fans, the then heel WWE Undisputed Champion, Big Evil (the logical progression from his American Badass gimmick), The Undertaker.

Cena wrestled in WWE’s developmental territory Ohio Valley Wrestling as “The Prototype,” a semi-robotic character whose name would prove to be an interesting bit of foreshadowing for the rest of his career, since Cena eventually became the prototype for what WWE looks for in the guys that they push to the type of the company. Even still, there was certainly no telling that Cena would become one of the biggest sports entertainment stars ever when he was called up to the main roster, nor that The Undertaker’s WrestleMania streak (then at only 10 and rarely acknowledged), would evolve into the biggest annual WrestleMania storyline even when it got to the point that he was almost exclusively only working one match a year.

Perhaps the payoff to that Smackdown! angle was always intended to be the match between Cena and The Undertaker exactly one year and one month after Cena and Taker’s encounter. I doubt that it was — as I said before, it was likely just dumb luck that things fell into place this neatly for WWE — since there likely weren’t plans for Cena to evolve into the gangsta-rap wannabe who would be busting out a freestyle rap on The Undertaker, a former “deadman,” while standing in a cemetery.

And really, without that angle, that feud just doesn’t work. To my recollection, Cena was the first superstar to challenge the absurdity of The Undertaker’s gimmick, which is just brilliant because Cena’s Leader of the Chain Gang gimmick was just as hokey, but like The Undertaker’s Deadman shtick, it just worked. The cemetery freestyle marked the first moment where I, then only 11 years old, felt like there was a brighter future for John Cena. It turns out I was right.

The 2003 Survivor Series was significant for two reasons. First, and arguably less importantly, it was the first pay-per-view Cena, the Doctor of Thuganomics, performed as a babyface. As wrestling fans are well aware, this hasn’t changed since. Second, and arguably more importantly, it marked the end of the motorcycle riding phase that fans always seemed to be wishy-washy about. The Undertaker faced Vince McMahon in a Buried Alive Match at Survivor Series, and with the help of The Undertaker’s on-screen brother Kane, McMahon buried Big Evil and won the match.

(If you’re not a wrestling fan and you’re reading this, I applaud you. My goodness, you must be so effing confused right. I apologize … I’ll try to be a little more clear when I’m explaining the progress of the accidental build to this Sunday’s match).

Four months later, The Undertaker rose from the dead — he didn’t literally die and come back to life, just in storyline — and returned as “The Deadman” to face his brother Kane at WrestleMania XX. This was a significant development because without the return to the mysterious Deadman gimmick, the Undertaker’s WrestleMania streak, sitting at 12-0 after WrestleMania XX, doesn’t hold the same sort of weight if he’s riding down the WrestleMania ramp every year on a motorcycle. The long walk with the druids holding the torches and the smoke and the funeral music is much better for building the suspense of a marquee match.

Less than three years after making his main roster debut, John Cena defeated John Bradshaw Layfield (a delightful and tremendously underrated mid-00’s heel) for the WWE Championship. It was a smart, necessary, and perfectly-timed future-building booking decision that was overshadowed at the time by a number of other results from a top-heavy WrestleMania 21 card. Dave Batista scored a similar sort of victory over Triple H in the World Heavyweight Title match. Edge won the first ever Money in the Bank Ladder Match. Shawn Michaels and Kurt Angle stole the show with one of the best matches in WrestleMania history.

Additionally, The Undertaker defeated Randy Orton in a match billed as a “Legend vs. Legend Killer” showdown which doubled as the first WrestleMania match for Taker where the build was almost solely focused on his opponent breaking his WrestleMania undefeated streak. On the surface, this may seem insignificant, but The Undertaker’s streak eventually became WrestleMania.

It had been seven years since Cena’s coronation as the face of the WWE and The Undertaker’s streak becoming a WrestleMania storyline all by itself, and here is where things stood after the one and only WrestleMania I’ve been to in person … John Cena was the established face of the WWE, but after his loss to The Rock (and because of CM Punk’s rapid rise to the top of the company in 2011) it felt like, to paraphrase Cena himself, “his time was up.” The “we’ve Cena Nuff” crowd wasn’t just a few fans here or there anymore. It was a split crowd every night; nearly a perfectly even mix of “Let’s Go Cena” and “Cena Sucks,” except for in The Rock’s hometown of Miami at WrestleMania XXVIII, where 80 percent of the crowd was anti-Cena.

The most memorable match of WrestleMania XXVIII, the one that coaxed me into more “This is Awesome” chants than any other, was the Hell in a Cell match between Triple H and The Undertaker, who was searching for his 20th consecutive WrestleMania victory. Of course, The Undertaker won, and rumors soon followed that Taker, 47 years old at the time, would retire now that the streak had reached twenty.

Ask any wrestling fan in 2012 if they thought that either Cena or The Undertaker would be main eventing a WrestleMania six years later, and I guarantee you the vast majority would’ve answered no.

After 21 consecutive WrestleMania victories, this happened …

Years had now past since The Undertaker’s Streak had ended at the hands of Brock Lesnar, and Cena was once again on track to work a WrestleMania match that didn’t have a solid payoff … unless you want to count Cena’s real life proposal to WWE Superstar Nikki Bella as a payoff, in which case it was a very solid payoff. Anyway, Cena and future Mrs. Cena would face The Miz (Cena’s WrestleMania 27 opponent) and Maryse Mizanin (real-life wife of The Miz) in a mixed tag team match at WrestleMania 33, and there was very little any of the four competitors in the match could do to hype their showdown in Orlando other than trade verbal jabs in the weeks ahead of the contest.

These insults ranged from predictable and immature to edgy and personal, but one comment stood out more than the rest. On the February 28th edition of Smackdown Live, The Miz claimed that Cena received preferential treatment backstage because he was the face of the company to which Cena replied, “If I was really this black arts manipulator, pulling all the strings this close to WrestleMania, you think I would be standing in a ring toe to toe, face to face with you? Hell nah, I’d be standing face to face with The Undertaker.”

It was the first time that anyone on WWE programming had acknowledged the possibility of this dream match, and shortly after, rumors leaked out that Cena and The Undertaker had been penciled in for WrestleMania 33 before Vince McMahon changed up the plans and instead booked Cena in the mixed tag match and The Undertaker to face the heir apparent to Cena as the face of the company, Roman Reigns. And for the record, very few fans were excited for either of those two letdown matches.

As WrestleMania season rolled around yet again, John Cena claimed he lacked a clear path toward a match at WrestleMania. He had tried and failed to win the Royal Rumble Match, and a six-pack challenge for the WWE Championship at the Fast Lane pay-per-view, so in an act of desperation, he officially challenged the supposedly retired Undertaker to one more match at WrestleMania 34. And over the weeks that followed, Cena didn’t hesitate to poke and prod and taunt and beg and plead The Deadman for a match like no other potential Taker WrestleMania opponent ever has. The reaction to Cena’s mic work and the direction of this admittedly curious build has been mixed, and even more so since the go-home episode of Monday Night Raw concluded without The Undertaker accepting Cena’s challenge, or even acknowledging it.

I personally have loved every bit of it. From Cena’s reality driven remarks about Taker’s wife’s Instagram account, to Cena’s continued use of Social Media to advance the storyline, to the comical fearlessness of The Undertaker’s mystique and feigned frustration about the lack of an answer Cena has received to his challenge, it’s just been different. Sometimes even if the build doesn’t totally make sense, different is a nice alternative to the norm. The norm would’ve been the lights going out and the gong and the casket being pushed down to the ring. I actually have preferred Cena shouting “do something” and questioning The Undertaker’s lack of, um, balls.

To the novice wrestling fan, it probably appears that this match will not be happening. Cena will do exactly what he’s been saying he’ll do … he’ll go to WrestleMania as a fan. The Undertaker won’t show up, and a frustrated Cena will be matchless. For this commitment to the angle right down to the wire, I applaud the WWE for taking an altogether different approach toward booking what should be the final match to go on on Sunday night in New Orleans. My hunch is that somehow it will still be the final match to go on. I just can’t see them wasting the payoff to that handshake back in 2002.