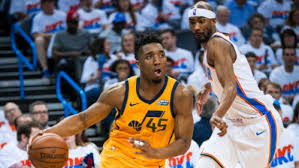 Donovan Mitchell, who was a game time decision due to a bruised left foot he suffered in Game 1, showed no ill effects, as he scored 13 of his 28 points in the fourth quarter to lead the Utah Jazz to victory over Oklahoma City Thunder 102-95, and tie their Western Conference playoff series at 1-1.

Derrick Favors showed out with career playoff bests of 20 points and 16 rebounds, while Ricky Rubio had 22 points, nine assists, and seven rebounds, giving the seven-year vet the first playoff win of his career.

Russell Westbrook fell just on rebound short of a triple-double going for 19 points, 13 assists, and nine rebounds for the Thunder. Paul George, who scored 36 points in Game 1, finished with 18 on 6-for-21 shooting. Carmelo Anthony scored 17 points, but made just six of 18 shots.