The NBA Draft is annually one of the best basketball nights of the year even though no games are played and it’s almost impossible to accurately determine who the winners and losers were by evening’s end. It’s a one-night glimpse into what both the short-term and long-term future of the NBA may look like, and often times we’ll see teams make choices, via Draft Pick or via Trade, that indicate whether they value the present or the future more. It’s such an exciting, nearly perfect night that for four hours NBA fans actually manage to forget that the NBA’s Draft Lottery procedures are still broken.

Of course, one could argue that there is nothing wrong with the way that the NBA has determined the order at the top of the Draft since 1990, when the league determined that a weighted lottery system would be implemented. Since 2005, the 14 teams that did not make the NBA Playoffs would enter in the Draft Lottery. These 14 teams were ranked in reverse order of their regular season record and assigned the following number of chances to win the Draft Lottery: 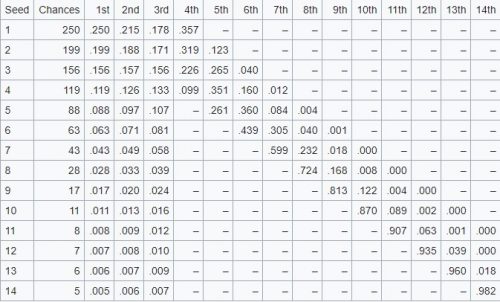 In September 2017, after many years of complaints from fans and individuals inside the league alike, the NBA Board of Governors approved changes to the Draft Lottery system in order to deter teams from tanking games for better lottery position. “NBA Draft Lottery reform is a meaningful step in our continuous effort to enhance the quality of our games. These changes were necessary to improve the competitive incentives for our teams,” said NBA President of League Operations Byron Spruell. Under this new system, which starts next year, the odds at the top of the NBA Draft Lottery will be leveled so that the teams with the three worst regular-season records will each have a 14 percent chance of winning the lottery. The complete rundown is shown below: 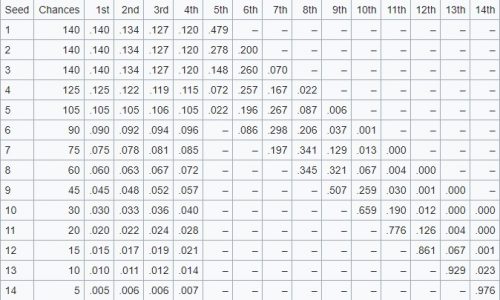 Again, one could argue that there is nothing wrong with the Draft Lottery system that will be introduced next May. It’s even possible to make the case that it could potentially limit the number of tanking teams and the numbers of games where teams are blatantly tanking. I think there is some merit to that argument, but two things are still certain:

1. Teams will still make obvious and unapologetic attempts to put themselves in better position to lose games. That’s going to continue happening. Especially during years when, as it was the case this past season, there is an abnormally large group of teams bunched together toward the bottom of the league’s standings in mid-March who are all separated by just a few games in the loss column and all jockeying for position in the Draft Lottery — for example, on March 18th of this past NBA season, seven teams had between 48 and 52 losses.

2. Whether they are purposely doing so or not, bad teams are being rewarded for being bad. There is incentive for losing games. Now I get that it is important to create/preserve balance and parity within the league. I’m fine with that and I appreciate that and for the most part, I agree with that. But the number one objective of the NBA right now should be cleaning up the quality of play/level of talent on the floor in a small, but noticeable percentage of games late in the season. It’s not as if even half of the teams in the league are tanking, but even still, imagine spending money to go to this April 4th game between the Dallas Mavericks and Orlando Magic and wondering who the hell half of the guys on the floor were at all times. 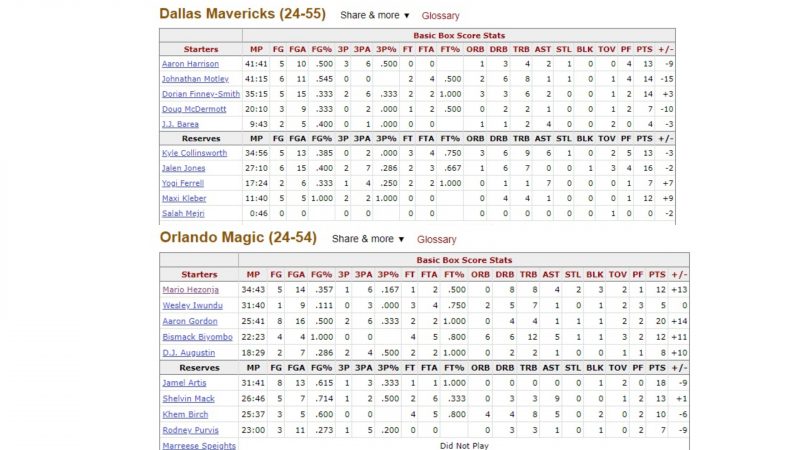 So in five years, when tanking is still an unresolved issue, the NBA Board of Governors will again come together to contemplate a way to combat this problem. Hopefully by then they’ll have either stumbled upon this proposal — because surely that’s how things get done in the NBA league office; they just comb through various blogs and sports websites until the best idea just jumps out at them — or this proposal (or one similar) will gain some steam in the meantime. Regardless, after years of caring about the NBA Draft and the Draft Lottery, and years of trying to figure out the best way to improve the Lottery itself, I think I’ve finally come up with something good.

I call it The NBA Divisional Draft Lottery, and here’s how it works, in seven simple steps:

Before it’s decided which team would make the 1st Overall selection in the NBA Draft, a Random Draw would determine which Division that team came from. There will be a portion of the NBA fanbase that would claim that NBA Divisions are pointless, NBA Division Titles shouldn’t be celebrated, and using these pointless Divisions to help determine the order in the NBA Draft is foolish. Here’s my counter: Until Divisions (and maybe Conferences too) are scrapped altogether, we might as well make use of them. And this not only accomplishes that, it also promotes the idea of some parity amongst the Divisions, not just the league as a whole.

In The NBA Divisional Draft Lottery, all Divisions have equal odds of winning a Lottery Draw. Each of the six Divisions would have a 1 in 6 chance, or 16.6%, of landing the 1st Overall pick in the NBA Draft.

Step 2: This Divisional Lottery Draw continues for picks #2 through #6, with the odds adjusting to remain even in each Draw.

Step 3: Within each Division at each Draft slot, another Random Draw takes place to see which team gets the Pick — Picks #1 through #6 — in question.

This is where things get interesting. It’s not just the teams that missed out on the Playoffs who are involved in the Lottery. All thirty NBA teams have a chance of securing a Top 6 Pick in the NBA Draft. Here is the breakdown of odds:

5th Place in Division – 45.0% chance of winning the Lottery Draw

4th Place in Division – 25.0% chance of winning the Lottery Draw

3rd Place in Division – 15.0% chance of winning the Lottery Draw

2nd Place in Division – 10.0% chance of winning the Lottery Draw

1st Place in Division – 5.0% chance of winning the Lottery Draw

In situations where one team owns the Draft Pick of another team, this process works the same way as it does within the conventional Draft Lottery. For example, the Cleveland Cavaliers owned the Brooklyn Nets 2018 1st Round Draft Pick and that pick was unprotected, so therefore at the time of the Lottery Draw for the Atlantic Division, the Cleveland Cavaliers would have a 45% chance of acquiring that pick because the Nets finished 5th in the Atlantic Division.

Step 5: After Divisional Slots have been determined, the team with the worst remaining record in each Division gets the corresponding Draft Pick.

This is a measure to ensure that no team that finished last within their Division picks outside of the Top 12.

Step 6: Remaining Picks are based on Regular Season record.

It doesn’t really make sense to me why the Draft Lottery is on the TV schedule in mid-May, smack dab in the middle of the peak of the NBA Playoffs. If it were up to me, we’d wait until the NBA Finals were completed and then devote an entire week of coverage to The Divisional Draft Lottery, Mock Drafts, trade speculation and the Draft itself.

Naturally, there are issues with this proposal. I never said it was perfect; I just said it was good.

First, the Northwest Division was stacked this year, with all five teams winning between 46 and 49 games, and by rule of The NBA Divisional Draft Lottery, one of those five teams would receive a Top 6 Pick in the Draft, and another would pick somewhere between the 7th and 12th Picks. But again, is it the responsibility of the league to maintain the competitive balance throughout the entire league, or is it the responsibility of the league to attempt to prop up the worst teams in the league? To me, “balance” implies an opportunity for all teams to possibly improve their roster with a high pick in the NBA Draft. It doesn’t imply the need to hold the hands of teams who often can’t get out of their own way.

Second, there’s always the very slim chance that an already stacked team could obtain a high enough Lottery Pick to Draft a sure-thing future star. Imagine if the Golden State Warriors landed Luka Doncic this year. Or think about if in 2003 the Los Angeles Lakers had defied the odds, ended up with the #1 Pick and had been able to draft LeBron James. Madness, right? Well here’s my contrarian viewpoint to an argument against this: Don’t we actually kind of love when super-talented basketball players play together? Wouldn’t it have been incredible to throw LeBron into that Shaq/Kobe situation back in 2003? Wouldn’t it be at the very least, interesting, to see Doncic eventually unseat Andre Iguodala in the Hampton’s Five Line-Up? With apologies to any Suns or Kings or Hawks fans reading along, isn’t Doncic on a Playoff team — not necessarily the Warriors — next year way more fun than watching him try to figure things out with inferior teammates, a coach who is playing Checkers and a simple-minded front office?

The NBA has never been a league of parity. The Boston Celtics dominated the 1960’s. The Celtics and Lakers shared that distinction in the 1980’s. The Chicago Bulls won six championships in the 1990’s. The Lakers, Spurs, Warriors and LeBron James have won 16 combined titles since 1999. And ya know what … the league is doing just fine right now. We’re in the midst of a Golden Age of both talent and intrigue, and a somewhat drastic alteration to the Draft Lottery system wouldn’t harm that momentum. It might just add to the intrigue.