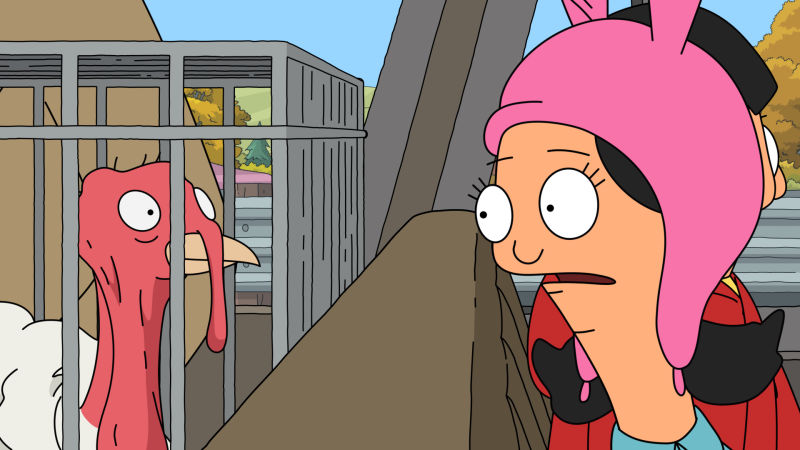 This week was the Thanksgiving episode of Bob’s Burgers season 9. The Belcher family saved a turkey.

The mayor pardoned the turkey, named Drew P. Neck. But the Belcher kids found out that they were actually taking the turkey to the slaughterhouse.

The premise of the episode allowed for lots of big hijinx as they went on a road trip to save the turkey. But, it was also hard to buy into how determined the Belchers came so quickly. All of these characters are inclined to get obsessive at times, but there was no justification for it in the episode. I wish there’d been something character specific driving it. Instead, every character besides Bob Belcher became inexplicably obsessed. The attempt at an arc by mentioning Louise Belcher’s hatred of turkeys just made it stranger that she was so aggressive about helping.

This became more and more distracting as the turns became bigger. Eventually, Bob was leading his small children towards coyotes just to save the turkey. Bob pointed out how strange and hypocritical this was when they were all about to eat a turkey for dinner, but it still never felt like the problem was addressed.

Still, this was a funny episode that included the always enjoyable Paul F. Tompkins as the deputy mayor, Lennon Parham as the sad official tasked with taking the turkey to the slaughterhouse and Rob Huebel as a reporter on the case.

The best part of the episode was the detail that poor Bob just wanted to buy fresh cranberries. This was the one character specific thing that really made this feel like Bob’s Burgers instead of a generic comedy.

The events of the episode eventually led them to a farm that had a cranberry bog. Seeing how happy Bob was in the bog was a delight. Bob loves Thanksgiving despite consistent disappointments, so it was genuinely moving to see him have a win.

Also check out my review of last week’s episode of Bob’s Burgers season 9.