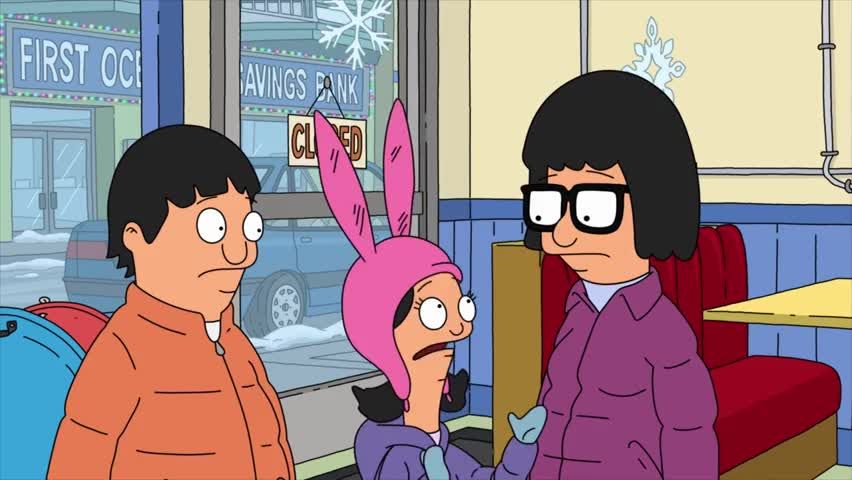 This week was the Christmas episode of Bob’s Burgers season 9. The episode focused less on the holiday to tell more of a general winter story.

Louise Belcher, Gene Belcher and Tina Belcher were excited to go sledding. Louise In particularly clearly loved sledding. But, Logan Bush and his friends ruined their time by throwing snowballs at them. The kids recruited Rudy’s older cousin Mandy, voiced by Jillian Bell, to defend them. The formula of kids feuding over turf almost always works on sitcoms and this was no exception.

Louise and Logan’s rivalry is one of the strongest dynamics in Bob’s Burgers. Their deep hatred for each other lets things escalate in a way that feels natural. Logan is also very easy to hate. It’s funny when bad things happen to him.

The main story tied into a minor plot about Teddy plowing driveways. Louise convinced him to plow the hill to ruin the snowball throwing station. It was a good plan, but it was ruined by more snow. The packed snow allowed Logan and his friends to create “super snowballs.” The plot beats in this episode really moved along in a way that felt organic without being too predictable.

In particular, the ending in which every female athlete at the high school ganged up on Logan was great. Louise briefly defending him allowed the episode to be a little sweet, while still delivering cathartic vengeance.

Meanwhile, Linda Belcher was jealous when Bob Belcher turned out to be gifted at knitting. Linda’s deep love of knitting, combined with how terrible she was at it, made this work emotionally. Her dream about doing ballet and meeting a version of The Nutacker called “The Knit Cracker” was a great sequence. The ending in which the kids actually liked her awful scarf the best was also very sweet.