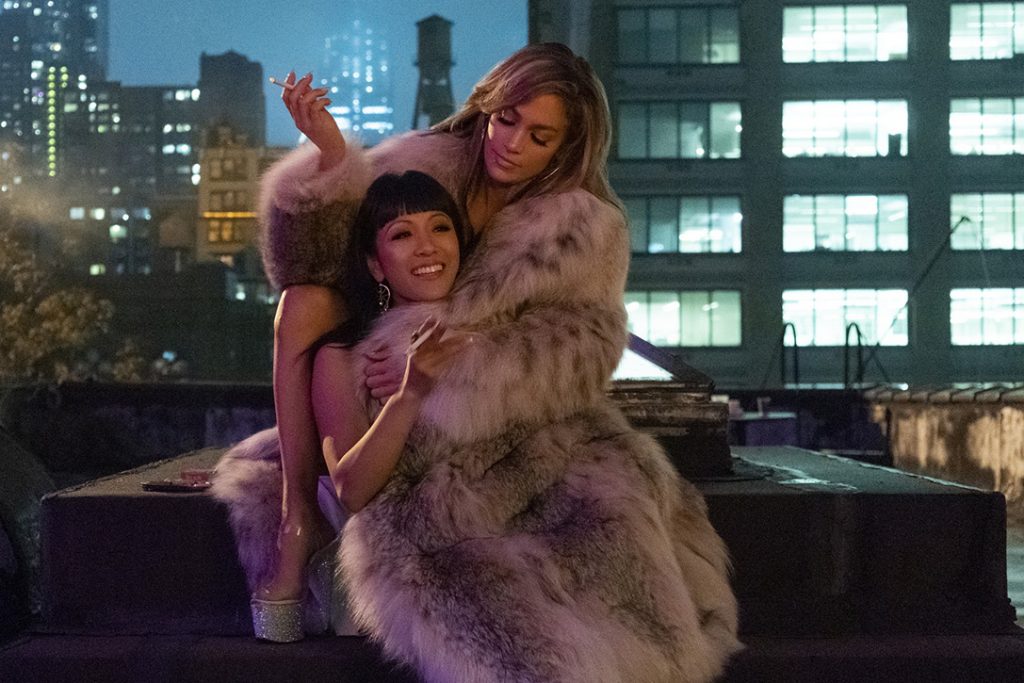 In a world where competition is high and employers squeeze out every ounce of energy from their employees’ souls, everyone has to hustle to live comfortably. Director Lorene Scafaria displays the true story of a group of headstrong strippers who get dangerously creative with their moneymaking schemes in Hustlers. Following a woman named Dorothy (aka Destiny), we get an inside look at the desperate measures a team of women took several years ago when the stock market crashed in 2008, cutting down a big chunk of the Wall Street money streaming their way. Starring Constance Wu, Jennifer Lopez, Julia Stiles, Keke Palmer, and Lili Reinhart, this film boasts a star-filled cast.

Director Scafaria makes this movie pop, as it drips in sexy neon streaks and glamorous glitter. She showcases her talent tremendously, utilizing slow motion and intimate medium close-ups in alluring ways to lure you into the lifestyle. On the other hand, she also builds up the tension well and utilizes audio techniques to place you in the characters’ shoes. And the film moves at a brisk pace, keeping you interested throughout the entire journey.

Although the film is visually appealing, in terms of the beautiful ladies onscreen and the captivating shots and editing, there’s a significant portion of the film that feels repetitive. Yes, it’s more in line with the real events, but after the third time it happens, you feel a bit wary of the whole routine. There are missed opportunities where the film could dig deeper into the mindsets of the ladies to make the movie a little more well-rounded. However, those missed beats are substituted with often hilarious moments, so it’s not a complete loss.

Audiences at TIFF raved about Jennifer Lopez’s performance as Ramona, the ringleader of the group, and it lives up to the hype. Lopez isn’t the most versatile or talented actress on the block, but she has plenty of bold attitude and sex moves to play this stripper matriarch who’s willing to do anything to stay reel in the riches. Not to mention, her talents as a dancer are put to good use, as she is ferocious on stage.

Constance Wu is the main lead in the film, playing Dorothy/Destiny, and she turns in a committed performance. She invests in the character, but it feels like Dorothy isn’t fleshed out well enough for us to care much. Sometimes it seems like certain moments of her life zoom by, so it’s difficult to empathize with her character completely. The rest of the cast fill in the roles well, especially Keke Palmer as Mercedes, as she draws plenty of laughs. You’ll also enjoy some cameos here and there, including ones from Cardi B and Lizzo.

Hustlers is a frenetic film with plenty to love, and it’s easy on the eyes. It presents real problems that we can all relate to, and although the women’s solution is ultimately immoral, you get a Robin Hood vibe from what they manage to execute. These ferocious ladies take matters into their own hands and turn the tables on degrading power-brokers who represent part of what’s wrong with the world, making them the helpless victims for once. And the film leaves you with the concept that this whole country is a strip club, which is hard to argue against. There are the haves (people throwing the money) and the have nots (people doing the dance).