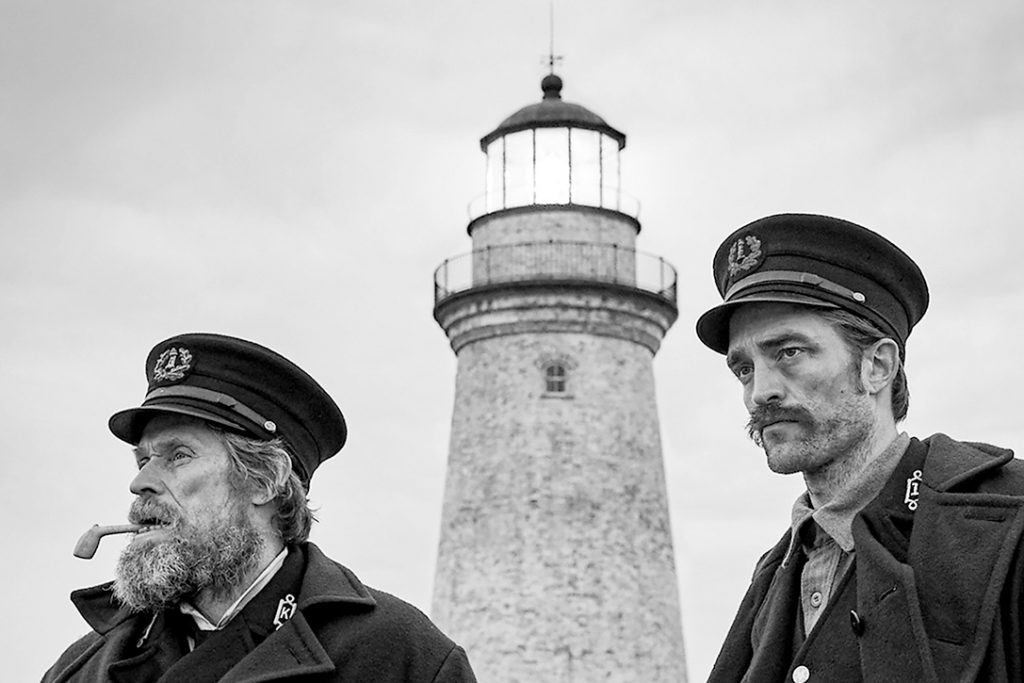 Isolation and boredom will often make one go mad, which is the case for the two men in Robert Eggers’ The Lighthouse. A young man and an old veteran have to spend four weeks together on an island to take care of Lighthouse chores and upkeep in the 1890s. A showcase for the acting talents of Robert Pattinson and Willem Dafoe, the arthouse film is a follow-up to Eggers’ modern horror movie.

First, let’s start with what works. Undeniably, the film is beautiful, and it’s presented in a 1.91:1 aspect ratio to emphasize the claustrophobic experience. The monochrome palette brings out the emotions of the actors and their gritty surroundings, including the phallic lighthouse. The bold editing, integrating eerie shots with hallucinatory sequences, makes for an engaging visual experience. There’s not a single shot in the film that wouldn’t make an alluring framed photo at a high-brow art gallery. And the cinematography is paired with an effective foghorn soundtrack, although downloading it would be a horrible idea.

As for the script, The Lighthouse doesn’t present characters you can relate to easily. There’s plenty of ambiguity, but it often works against a film since you have to reach to care about what’s going on. And yes, people are calling this a horror film, but it’s not unsettling in a scary way at all. Essentially, the film is a collection of dinner scenes that get increasingly maddening and absurd as the story plays out. It’s sporadically funny, but oftentimes you’ll feel the desire to leave, just as the lighthouse keepers wish to do at the end of their four-week shift.

Almost the entire film showcases the acting talents of Robert Pattinson and Willem Dafoe. Both actors are devoted to giving it their all, and it shows. However, the characters are not very interesting, no matter how well they’re played by Pattison and Dafoe. At times, Dafoe comes off as an R-rated version of the pirate in SpongeBob Squarepants. The quiet and reserved Ephraim, played by Pattinson, and the loud-mouthed drunken Thomas, embodied by Dafoe, are at their most entertaining when they’re drunk and arguing. The duo plays off each other well, trying to earn the title of the craziest person at the lighthouse.