Although we don’t see Grogu’s face in The Mandalorian’s penultimate episode of the second season, Mando’s face makes an appearance as he takes off his helmet for the very first time!

With help from Marshall Dune, Din (Mando) and the Gang are able to release Migs Mayfeld and recruit him to help find Gideon’s location. They set off to the secret Imperial refinery located on the planet of Morak, where Mayfeld can gain access to a terminal that has Gideon’s location.

Once on the planet, the crew makes a plan to commandeer a tanker carrying Rhydonium, a highly volatile starship fuel. Everyone agreed that only Mayfeld and Mando should infiltrate the facility since the rest would be recognized as enemies and compromise the mission. Mando sheds his Beskar armor and helmet to go undercover as a stormtrooper.

Soon after Din and Mayfeld commandeer the tanker they are attacked by pirates who want to blow up the Rhydonium. Even without his seemingly impervious Beskar armor Din defeats the pirates in hand-to-hand combat, ironically, with the help of Imperial forces. As they enter the refinery they are met with cheers and rounds-of-applause.

Mayfeld and Din head to the terminal which requires a face scan before they can search for Gideon’s location. After seeing Val Hess, a superior that Mayfeld served under, he says that he cannot go to the terminal since he fears he’ll be recognized. 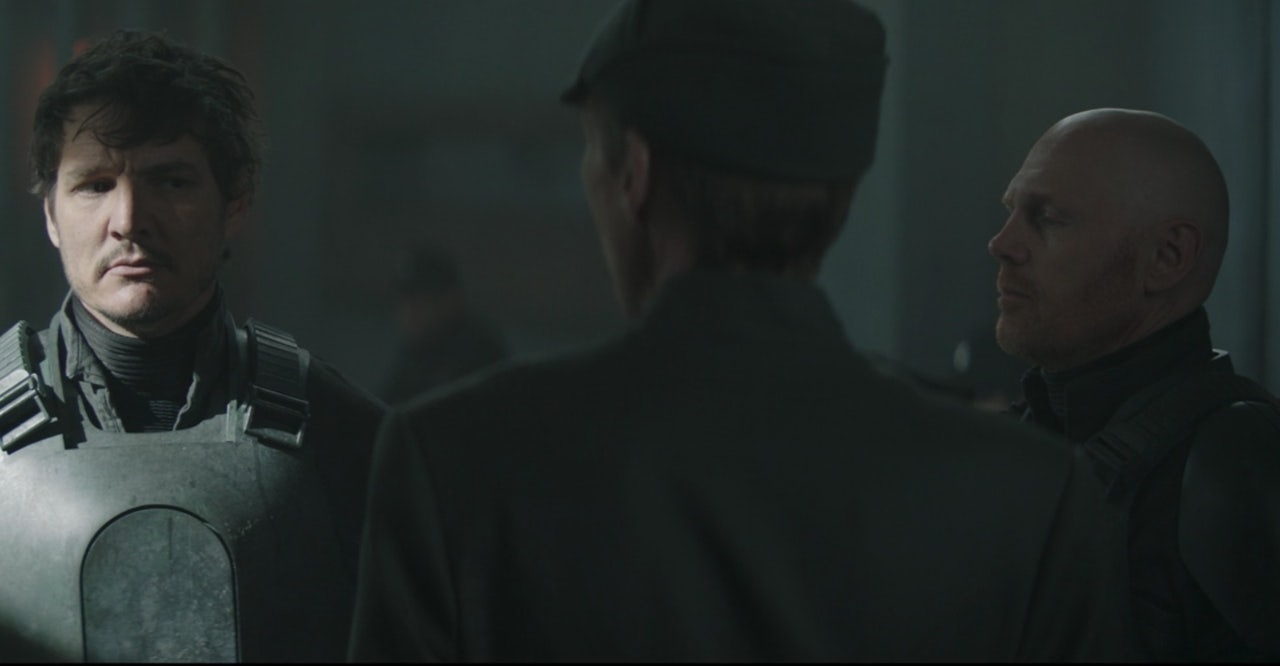 “Everybody’s got their lines they don’t cross until things get messy.”

Mando is faced with a big decision when he has to take off his armor and helmet. Something that he vowed he’d never do as showing his face counters his own beliefs and code he follows as a Mandalorian. Din decides to follow through with the plan and it is at that moment that we see Mando take his helmet off for the very first time in the series. Din gets Gideon’s location and the two narrowly escape the clutches of the Imperialists. As they are escaping, Mayfeld blows up the Rhydonium and destroys the refinery.

Going against his beliefs, Mayfeld gains literal freedom. On the other hand, Mando is a man who keeps his word and is honest. His beliefs are what guide his actions and shape who he is. Mando is a person who subscribes to order in his life. But Shedding his armor and showing his face, while it’s against everything he stands for, allows him to be free and gets him one step closer to rescuing Grogu.

While in the tanker, Mayfield suggests that one’s beliefs are simply dependent on the environment people grow up in. Nevertheless, beliefs can only take you so far.  In Mayfeld’s case, going back into that refinery reminded him of all the bad decisions he made, decisions he now deeply regrets. Destroying the refinery, not only served as a mechanism for his mini-redemption arc but was also in direct opposition to his long-held beliefs while he was an Imperialist.

Many viewers were hoping to see another appearance from Ahsoka, Bo-Katan, or another supporting character to help rescue Grogu. Their absence in this episode might cause some to feel like this was merely a ‘filler episode’.  In actuality, that is farthest from the truth. To look for the key takeaways from these episodes you have to look at the dialogue, particularly between Mando and Mayfeld and later with Imperialist Val Hess.

The main takeaway of episode 7 is that everyone has their own beliefs but, at the end of the day, you have the freedom to make decisions even if they conflict with your beliefs. This idea is extrapolated by the last words of Val Hess, “Everybody thinks they want freedom but what they really want order.”

Season 2 Episode 7 of The Mandalorian premieres next Friday, Dec. 18th on Disney Plus.