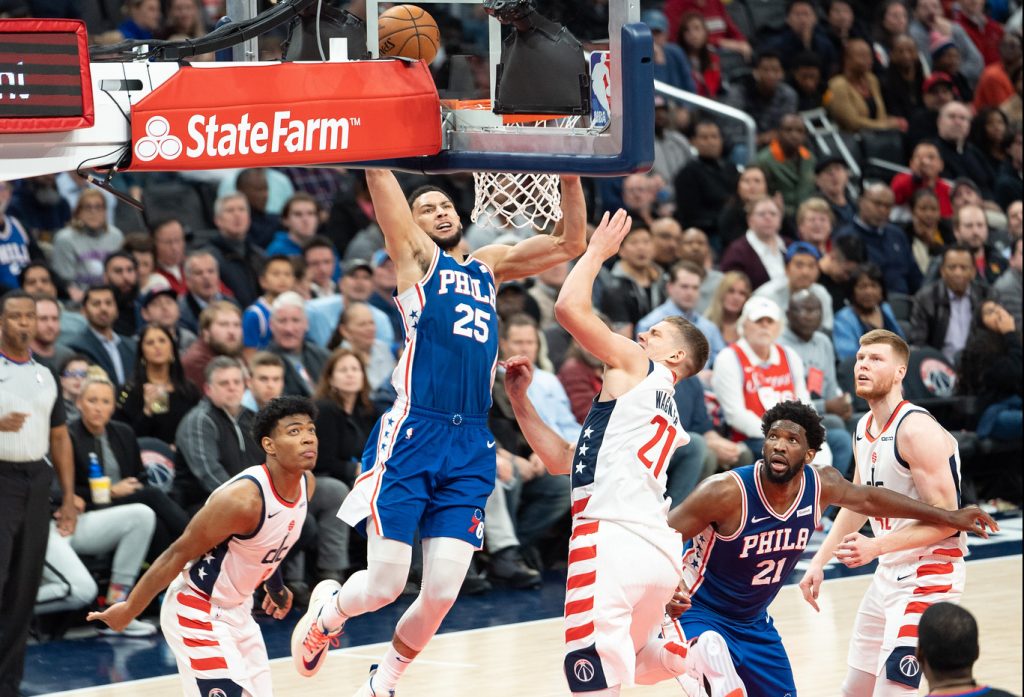 There’s no question as to whether or not that Philadelphia 76ers star Ben Simmons is one of the league’s brightest young stars. He’s become a perennial All-Star and is a huge cornerstone of the 76ers’ franchise, hopefully for many years to come. Although Simmons has averaged 15.7 points, 8.3 rebounds, and just under 8 assists, many critics have said that he’s underperformed. Obviously, as the second star alongside Joel Embiid, you’d hope that Simmons could step up his production from an offensive standpoint. However, his inability to be a consistent shooter from mid-range territory, as well as a threat from behind the arc have held him back from doing so. With these flaws in his game, does it make Ben Simmons overrated? I don’t believe he is and here’s why.

Like many others, I get why critics and analysts are so quick to criticize Ben Simmons for his play at times. If you look at his stats since entering the league, there really hasn’t been big changes in his game. In his first season, Simmons averaged 15.8 points, 8 assists, and 8 rebounds per game. In the following two seasons, he had statistically similar years averaging 16 points, 8 assists, and 8 rebounds. These stats are certainly substantial production for any young player, but since Simmons has been put in that category of “star”, many expect his point averages to be a little higher. I think the pressure that Simmons has to be that go-to co-star behind Joel Embiid, makes his current stats seem lackluster. Especially in a year where Embiid is playing out of his mind and is the MVP favorite for many, averaging 29.8 points, 11.3 rebounds, and 3 assists, and 1 block, Simmons’s stats don’t make him look like a true co-star to Embiid. But, to the critics’ credit, Simmons hasn’t done much to elevate his game offensively either. At the moment, a majority of his scoring comes from inside the paint on pick and roll opportunities, fast-break chances, in the post, and by putting the ball on the floor. Simmons shoots about 58 percent on two-point field goals, so it shows he thrives in this area. However, he still can’t hit mid-range shots or three-point shots effectively. At this point asking Simmons to consistently start knocking down three-pointers may be asking too much, but if he could at least become a solid mid-range shooter, then he could really elevate his own game, as well as his team’s play.

Now the biggest reason why I wouldn’t call Ben Simmons overrated is because of how he affects his team in every other aspect of the game apart from scoring. I mentioned his eight assists and eight rebounds earlier; those are crucial contributions his team needs to be a threat in the Eastern Conference. Simmons’ ability to see the floor well and get the ball to his teammates in tight spots is a huge part of the success the 76ers have seen thus far; this is key when you have shooters around you like Tobias Harris, Seth Curry, Danny Green, and Matisse  Thybulle. Since he’s an oversized guard, Simmons can fight for boards in the paint with other bigs to get his team more scoring chances on the offensive end and to push the ball on a fast break by getting a defensive board. Not to mention the force Simmons is on the defensive end. He can guard about every position, making scoring on him a tough task. Simmons averages just under two steals and under one block per game and has even started to receive some Defensive Player of the Year considerations from analysts and others around the league. So when you really look at his stats overall, Simmons is actually playing like a star.

To those who call Ben Simmons overrated, you are simply a casual basketball fan, who likes to judge players by only looking at their scoring averages; there I said it. Clearly Simmons is doing all the right things if his team is the first seed in the Eastern Conference and they have one of the better defenses in basketball. Sure, he could definitely look to improve his game by developing a more consistent jumper so that he could space the floor out more for his teammates, but even without that ability, he’s certainly not an overrated player. If Simmons were in a position where he was the primary scoring option while putting up his current stats, then we could argue if he was overrated or not. But, since he’s only the primary ball handler and playmaker while taking turns with Tobias Harris (20.7 points per game) as the go-to secondary scorer, his production is very good for the role he has. If Simmons just has a bit more confidence in himself offensively, the sky’s the limit for this kid. He could very well be a top five player in this league if he just adds a jumper; it’s only a matter of time folks.