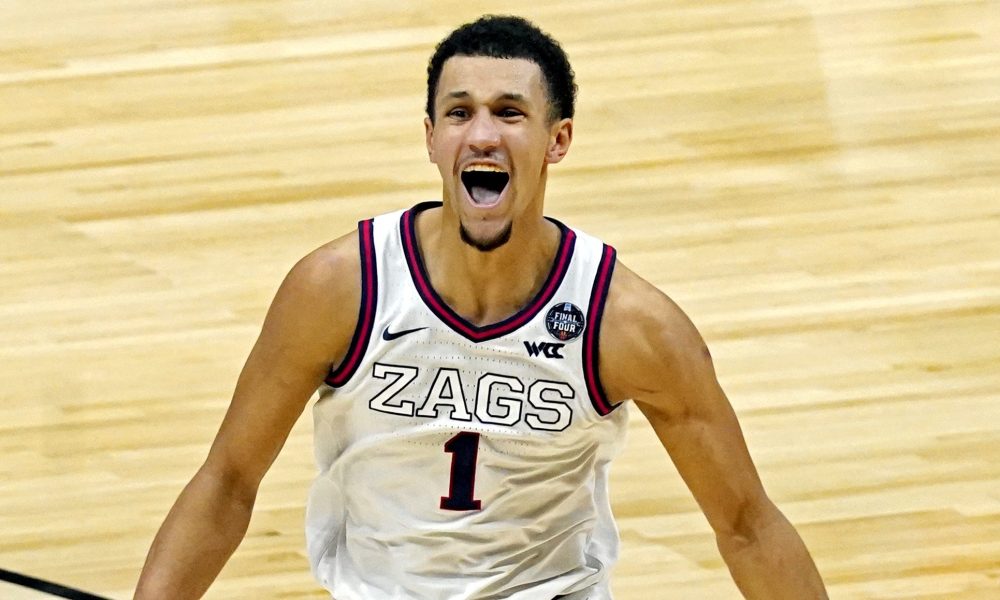 NAME: Jalen Suggs
HEIGHT: 6’4″
WEIGHT: 205
AGE: 19
POSITION: Point Guard
COLLEGE/ORGANIZATION: Gonzaga
NBA COMPARISON: Deron Williams/Jason Kidd
POSITIVES: Offensively, Jalen Suggs has a great all-around game. Not only is he a excellent scorer off the dribble but his off-ball movement is superior and gets more opportunities on slashing plays than on average. His facilitation is his best skill by far. He is always looking for the open player while keeping his scoring options alive. His efficiency is underrated, shooting 50 percent from the field and an outstanding 58 percent on two-point attempts. He’s also great at rebounding for his position. His defensive play is outstanding. Suggs is the top-tier defensive point guard in all of college basketball, averaging 1.9 steals per game. His athleticism is through the roof from being a top recruit in both basketball and football. He is great in the clutch as well. Prime example when he hit one of the best game-winners in college basketball history.

NEGATIVES: Suggs is not entirely the best three-point shooter, only shooting 33.7 percent in his one year at Gonzaga. Not to mention he is also inconsistent from beyond the arc as well. He’s only an average free-throw shooter, but has shown signs of improvement throughout the season. He can be a bit careless with the ball at times, averaging slightly under three turnovers a game. While his playmaking is above average, he isn’t exactly an elite passer. His assist to turnover ratio is only 1.83, while most above passers are considered to have around two. His shot choice can also be a bit questionable sometimes. He can be prone to hoisting up highlight shots that aren’t good looks.

NBA OUTLOOK: Jalen Suggs will likely be a top-five selection in this upcoming draft with real potential to become a franchise player for whoever selects him. He also has the great opportunity to be seamlessly paired with any star he joins because of his great facilitation and playmaking ability. His introduction to the league might be a bit rough, but his potential is through the roof especially if he improves his three-point shot. We could possibly be looking at an All-NBA player once he enters his prime a few seasons down the line. His dual-athleticism in high school showed out in college and will likely continue into the league. Realistic teams that Suggs could fit with are the Houston Rockets, Oklahoma City Thunder, and New Orleans Pelicans if they chose to trade up.