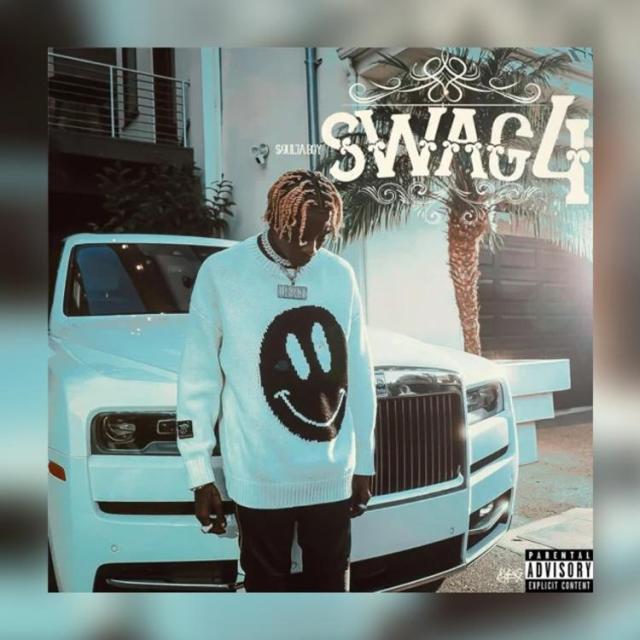 DeAndre Cortez Way, better known as Soulja Boy, returns with his fourth project of 2021, Swag 4. The fourth installment in his Swag mixtape series, and his 63rd mixtape overall (no, that’s not a typo), Soulja comes into this release after generating a decent amount of buzz during August 2021. Soulja started the month of August by releasing a mixtape titled No Looking Back, and he followed that up by claiming he owned the video game company Atari, which prompted the official Atari Twitter account to deny this claim. He somehow topped this by attempting to begin a beef with Kanye West after Soulja was left off the Donda song “Remote Control,” which featured Young Thug and The Globgogabgalab. Soulja took to Twitter and proceeded to leak the verse that was supposed to be on Donda (which was awful), which he sandwiched in between nearly 100 tweets aimed at Kanye. So, after his busy August, Soulja decided to capitalize on this buzz and release Swag 4.

Going into my first listen of Swag 4, I had no idea what to expect, having only heard Soulja Boy’s biggest hits like “Crank That” and “Kiss Me Through The Phone,” so my expectations for this mixtape were low. However, Soulja failed to even meet my low expectations for this project, and even though the project is only 14 songs and 37 minutes long, Swag 4 somehow manages to overstay its welcome. It becomes clear after the first few tracks that Soulja was aiming for a trap sound on this tape, as the majority of the beats feel like Soulja’s producers went and searched up  “free trap beats” on YouTube. These beats feel very basic and lifeless, even for a genre that can get repetitive from time to time. A couple of the tracks, “Yellow on Yellow” and “Paraphernalia,” have solid production, and sound like something that could be found on Young Thug’s Slime Language 2, which gave me hope that Soulja could make a decent song with these beats. However, Soulja did not, and crushed my hopes and dreams for one decent song on this tape.

Throughout Swag 4, Soulja Boy seems to have no ability to adapt to the different beats he is presented with. Instead of altering his flow to match a beat better, Soulja seems content to use the same flow on almost every track, gleefully unaware of how lazy and poor it will sound. No track highlights this more than the aforementioned “Yellow on Yellow,” where Soulja Boy even works the hook into his unchanging flow that seems to neither be on-beat or off-beat. Even with the decent beat, Soulja somehow manages to make this song borderline unlistenable, much like the entirety of Swag 4. The cherry on top of “Yellow on Yellow” is the 20-second outro where Soulja Boy says he is the one “starting this s**t,” and that he is the “first rapper on YouTube.” This part of the song was honestly my favorite, as it gave me a quick break from Soulja’s intolerable flow, and made me laugh at his preposterous claim of being the first rapper on YouTube.

As I got further into this project, my expectations fell further and further after hearing songs like “Hold On Wait” and “JPay,” which contained lifeless trap beats and Soulja showing no regard for having a listenable flow. However, when I reached the sixth track, “Shawn Carter,” I got excited, as naming a track after hip-hop legend JAY-Z creates some high expectations for a song. I’ll give Soulja some credit here, as he switched up his flow for the hook, which was essentially him repeating JAY-Z’s name. Alas, this track also featured a very lazy-sounding trap beat and more of the same boring, passive flow that Soulja seems to have “mastered.”

On the very next track, “Paraphernalia,” Soulja is again presented with a decent beat, and again he drones on with a flow that allows almost no room for ad-libs or even breaths to be taken. The latter half of Swag 4 is more of the same formula, with beats sounding like they were made in about three minutes, and Soulja Boy doing absolutely nothing to make these beats more listenable. One beat got me excited on this second half of Swag 4, the G$ Lil Ronnie-assisted “Bussin,” but for all of the wrong reasons. This beat sounds like it could fit right at home in one of the desert levels found in New Super Mario Bros. Wii, which makes for a good laugh, but not a very enjoyable song.

While Soulja Boy’s days of topping the charts are far behind him, it is clear that his work ethic hasn’t wavered, with his vast mixtape catalog and his 127,000+ tweets being prime examples of him continuing to market himself and release music. However, his latest mixtape is a clear reminder that there is a big difference between quantity and quality. It is impressive that Soulja has released four projects in nine months, but after hearing Swag 4, that achievement loses some of its luster. This mixtape was filled to the brim with lifeless trap production, Soulja repeatedly using a flow that seems to zig-zag between being on the beat and off the beat, and yawn-inducing hooks when Soulja takes a break from his flow.

Even with my low expectations going into Swag 4, this project somehow manages to fall short of those and even earned the distinction of one of the few projects I’ve heard in my lifetime where I didn’t enjoy a single track. I’d give Soulja Boy’s Swag 4 a 0.6/10, and the main thing keeping it from a full 0 is that some of the production ranged from decent to solid. This project was borderline unlistenable for the majority of it and featured a noticeable lack of energy in all areas. While Soulja’s work ethic is commendable, Swag 4 highlights how Soulja seems to be more concerned with his latest Twitter feud than his music quality.