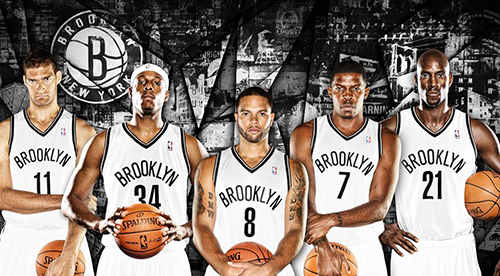 Let’s get one thing clear: in this game, money talks. Brooklyn Nets owner, Mikhail Dmitrievitch Prokhorov lives by that mantra and nothing shows that more than what he’s willing to spend to make his dreams of an NBA title a reality. After making a trade with the Boston Celtics, the Russian tycoon is digging into the Camelskin cushions in the backseat of his Rolls Royce Phantom to pay the luxury tax penalty for bringing Kevin Garnett, Paul Pierce and Jason Terry from Beantown to Brooklyn. Some say it’s risky, but as a Knicks fan I say, F***!

I live in Brooklyn, so I love the borough, no doubt, but I been with the Knicks and that’s my squad… what’s up Spike! With that said, I’m also a realist and the reality is that with two guaranteed Hall of Fame players coming down to Atlantic Avenue to play in the Barclays Center, it’s shaking the Eastern Conference big time and sending a message to the rest of the league.

The Nets already had talent, that wasn’t a question. They have the All-Stars, they have the bench players, but something was missing, and that something was critical in a city where you need it to survive. That something was toughness. A certain soon-to-be former Brooklyn Nets player was heard saying he was afraid of Brooklyn. Well that’s not an ingredient for a healthy career here. And to his defense, Brooklyn could be a scary place and it’s easy to be afraid of it, but don’t tell anybody you’re scared because that’s when it gets scarier (Give me your lunch money).

You know who’s not afraid of Brooklyn: Paul Pierce, Kevin Garnett and Jason Terry. I can all but guarantee these three professional warriors will feel right at home with the people, the food, the culture and the rhythm of this wonderful borough, and it’s going to give a boost to their production next season, as it does to everyone who lives here.

Some say that they may be too passed their prime to take it all the way, but I say, they’re not there to do the heavy lifting anymore, so they don’t have to be in their prime. With Brook “I ain’t shook” Lopez holding down the center position, KG will be able to move back to his natural power forward spot. On offense, he and Lopez can both shoot the 17/18-footer so defenses won’t be able to double team either one of them down low. It’s going to cause match-up problems because KG can still dominate any defender one-on-one when his game is clicking.

With Joe Johnson on the wing beside him, Pierce now won’t be the focal point of the defense. Now he will have space to operate off the ball to get free and get easy open looks. Johnson, though he’s shown he can hit crunch-time buckets, will have Pierce to look to for guidance when the pressure is on.

This is even more fun for Deron Williams. He knows he had an “off” season by his standards. Looking at the numbers, they weren’t that bad, but when you’re once looked at as one of the three top point guards in the league one year, and then looked for, as in “where did you go,” then your season was off. That leaves Jason Terry to do what he’s always done as the sixth man – give a scoring punch off the bench. With Reggie
“Monster Boards” Evans, a likely re-signing Andray Blatche and others, the Nets have a solid second unit that should compete well on a nightly basis.

That leaves that happiest guy of them all, new head coach, Jason Kidd. Congratulations are in order for the new job and it’s well-deserved. Some say he should take some time off to enjoy retirement as an active player, but I say the game is fresh in his mind from the players side and it will help him connect. Kidd was coaching for the Knicks this past season as one of Mike Woodson’s assistants; it just so happened that we needed a backup to Raymond Felton, so Kidd was given a uniform. He has a great relationship with his point guard, much better than the past two coaches, and I feel Kidd’s demeanor and basketball knowledge will be positives. From the looks of it, he’s surrounding himself with high quality assistants, and we know that his bosses are going to spend whatever is necessary to give him the best opportunities to succeed. Kidd’s actual
“coaching” experience is supplemented by time he’s already spent running NBA teams to title contention and championships. That will translate very well to the head of the bench. Kidd is savvy, calm and collected, and no one’s ever questioned his toughness – that’s a good look for Brooklyn.

Don’t mistake me for a bandwagon fan. I’m still standing by my team. I’m going to root for the Knicks all the way (Let’s go STAT!), but I’ll give respect where respect is due. Also, it’s going to make for even more excitement in the Atlantic Division next season. Now, though nothing is official until after July 12th, Brooklyn is definitely buzzing, from Brighton Beach to Bed-Stuy, and for good reason. This trade is going to bring out some real Brooklyn fans and home games will be a whole lot more difficult for opposing teams.

The Brooklyn Nets just got the toughness to match the borough they represent, and you’ll know what to say the next time someone asks: “Is Brooklyn in the House?” Without a doubt.