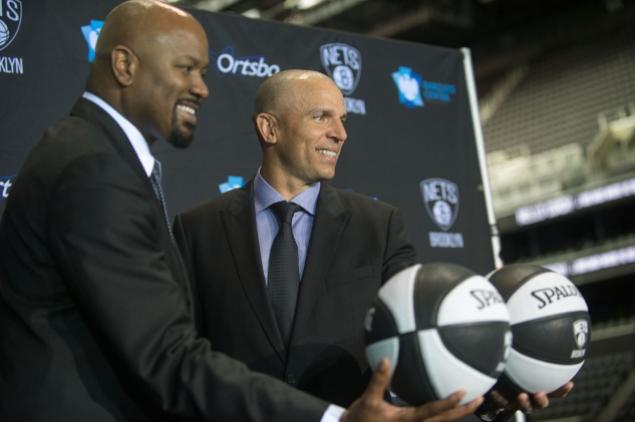 I am a Brooklyn Nets fan, hear me meh. As a follower of the Nets, I have had no lack of experience in moves that are generally panned by the NBA blogosphere. Last year, Billy King traded for Joe Johnson, traded a pick that turned out to be Damian Lillard for the ability to give Gerald Wallace a four-year $40 million contract and signed Kris Humphries to a two-year $24 million contract. None of those moves were well-received, yet it is because of those moves that the Nets are where they are now with Kevin Garnett and Paul Pierce, as well as Jason Terry on the team.

No, they’re still not winning a championship, but they have an argument for being the second or third best team in the Eastern Conference. This is where contextualizing the moves a GM makes comes in and it ties into the NBA’s “5 percent theory.”

Every major move the Nets have made is a set of falling dominoes that started with the Deron Williams trade. At the time, the D-Will trade was an absolute no-brainer. After months of courting the Denver Nuggets for Carmelo Anthony and failing, the Nets got a superstar in the prime of his career to headline the Brooklyn move and build a fanbase. The first opportunity that presented itself to Billy King to build on that was Dwight Howard. The Dwightmare went through multiple iterations before the Nets had the rug pulled out from under them at the last minute of the trade deadline and King either had to find a move and fast or head into the offseason without any idea whether he could get a player to help convince Williams to stay. So the Gerald Wallace trade happened, and during the summer, the Joe Johnson trade. Both trades happened so that Deron Williams would be convinced to stay, and stay he did.

Now I present the idea that contextualized in that manner, while the individual moves may be lackluster, the product as a whole is what is important. Billy King may have panicked and rushed his decision on Gerald Wallace, but in the end it resulted in a team good enough for 49 wins and a 4-seed in their first season in a new city. Is the Nets’ payroll bloated and huge for a team that only achieved a first round exit? Yes. That may not be the price they want to pay for a first round team, but it was the price they had to pay for it to happen at all. People will pan Kris Humphries making 12 million a year, but that large but short contract is the only reason the Nets were in Josh Smith talks this past season, and the only reason the Nets could have gotten the Garnett and Pierce trade done.

“If you’ve got even a 5 percent chance to win the title — and that group includes a very small number of teams every year — you’ve gotta be focused all on winning the title,” – Daryl Morey, Houston Rockets GM

The moves on their own or together did not make the Nets into a title contender, and they still have not, but they have the Nets in the game. It may ultimately end up in futility, but recent events such as the Russell Westbrook injury shows that crazy things do happen and the teams that are in the game in the first place are the ones that will be able to capitalize. The only thing that is certain about the NBA is uncertainty, and teams must live and die by the immortal words of Lloyd Christmas in “Dumb and Dumber” after being rejected by the object of his affection:

So you’re saying, there’s a chance?