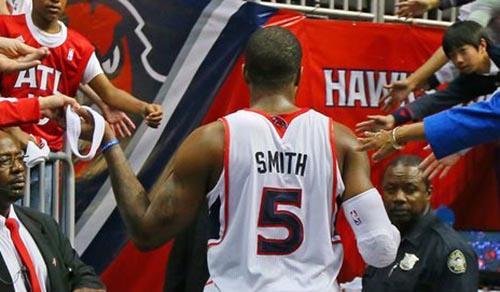 Josh Smith has agreed to join the Detroit Pistons, signing a four-year, $54 million contract. What? Detroit? It was a bit surprising, but then again the Pistons had over $20 million in cap space free on their books and this move made the most of it. Smith, who turns 28-years-old this December, adds some interesting dynamics to Detroit’s young and exciting frontcourt duo of Andre Drummond and Greg Monroe.

Pistons games will now be extra exciting to watch as Drummond and J-Smoove run the floor and explode with dunks or blocks, depending on which side of the ball they’re playing at the time.

In 2012-13, after Joe Johnson was traded to the Brooklyn Nets, Smith showed that he didn’t do too well when leaned on to be a team’s primary scorer. Yes, he did lead his team in scoring with 17.5 PPG last season, but his overall line didn’t get the tremendous boost many were expecting it to have when the Atlanta Hawks became “his” team.

Smith is expected to be the Pistons’ new small forward, something that doesn’t bode well for his shooting numbers. Smith excels when he’s attacking the basket and defending the paint. Positioning him farther from the hoop only serves to encourage him to take more ill-advised jump shots, which already comprise 47 percent of his shots and which he converts at an effective FG% of only 34.9 percent. Compare that to when he’s close to the basket where he has an effective FG% of 55.5 percent. The silver lining here is that he hopefully won’t end up going to the line as much. Last season he shot a career-worst 51.7 percent from the free-throw line.

If you take his shooting percentages out of the equation though, Smith should still be a beast on the counting categories. His career averages are 15.3 PPG, 8.0 RPG, 3.2 APG, 1.3 SPG and 2.1 BPG.

Smith now projects to deliver late-second to early-third round value, but in most drafts he should end up getting snatched up a lot sooner. If you’re conservative or want to draft around efficiency, it would be best to pass on him. If you’re willing to punt one or two shooting percentages though, you can make like Detroit and grab him.