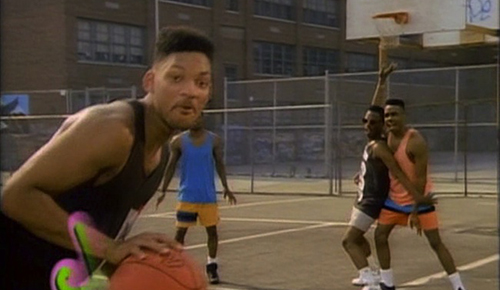 In this new segment, Evan Turissini goes 1-on-1 with some of Hollywood’s most iconic sports movies, scenes, and characters.

This past evening my butt was firmly in my recliner watching “The Fresh Prince of Bel-Air” when it dawned on me that basketball is a key component of the show from the get-go. In the first verse of the theme song, the main character, Will, played by unknown actor and introvert, Will Smith, is “shootin’ some b-ball outside of the school.” However, there are some serious inconsistencies with this fictional pick-up game. So much so that I doubt the actors in the opening sequence ever played a game of basketball in their respective lives! Let’s walk through it together, shall we? You can follow along on the YouTube video:

0:30 – Here we have our first shot of the 2-on-2 matchup. The teams are apparently black shirts (Will Smith and DJ Jazzy Jeff) against the garish neon tank-tops. DJ Jazzy Jeff, who can apparently play basketball wearing sunglasses, gets position in the most lazy manner possible. He appears to simply be leaning backwards into Neon Orange Guy. If Neon Orange Guy were smart, he would step backwards and let DJ Jazzy Jeff fall on the blacktop, where he’s probably been sleeping since 1996.

0:33 – At this point, the camera cuts to the view from under the basket. Everything is sped up to about double time, but there’s no fooling me or my trusty readers. Hey sis and sis’ friend that’s had a crush on me since third grade and scares me whenever she’s physically near me. Anyway, Jazzy Jeff runs across the baseline and apparently Neon Orange Guy, whilst defending Jazzy Jeff, gets hit in the face by nothing. Seriously, nothing even comes close. I bet this sequence was sped up when some guy in the editing room realized how frightfully obvious it is that Neon Orange Guy puts even Pau Gasol to shame acting-wise.

Meanwhile, Neon Blue Guy dives for the ball like a soccer goalie trying to make a save with literally zero provocation from Will Smith. His dive is three feet away from anywhere the ball was. He goes hands and knees down on hot summer asphalt that would make a fire-walking guru yelp and just pops right back up. Seems legit.

0:35 – At this point, Neon Blue Guy and Neon Orange Guy have both recovered from their ridiculous injuries and are double-guarding Will Smith. Both of them are flailing around with their hands in the air, waving them as if with indifference. They seem to be neglecting the fact that there is one other person in this game, and he is off-camera to the right behind Neon Orange Guy. This begs the question: why is Neon Blue Guy defending as if Will Smith can pass to his right. There’s nobody there. What is your left hand doing in the air, Neon Blue Guy? Are you waving to someone?

Naturally, Will Smith goes into some ridiculous moves to further embarrass these two ill-equipped opponents. But while the young Prince is rolling the ball off his shoulder and finger tips, he appears to take a total of seven steps. Now look, I know pick-up is lax—call your own fouls and such. But Jesus Shuttlesworth!!! Louis Braille himself would call that a travel. Moreover, it’s all good and well that the showboating in this scene sets up that Will is cool and good at basketball and street-smart BUT JAZZY JEFF IS WIDE OPEN. Is it impossible for Will to pass it around Neon Orange Guy, who is flat on his feet and acting with literally the barest of bare minimum intensity?

0:37 – For a guy who can spin a basketball on his fingers, Will sure has no idea how to take a hook shot. After showboating for a few seconds, Will Smith takes the shot and the other team watches its trajectory towards the basket, or at least its hypothetical trajectory towards the basket, because it looks like that ball would go really wide left. Smith is off-balance, falling to his left, not shooting straight, and the ball has left his hand before he’s even looking at the basket. The best part of all this is that even though Will is shooting from the dead center of the court, the ball in the next frame seems to come at the basket in a forty-five degree angle, which is physically impossible. Physicists to this day must still be puzzling as to how that shot went in. But hey, if it weren’t for that rip in the time-space continuum, Will would have never moved in with his auntie and uncle in Bel-Air.