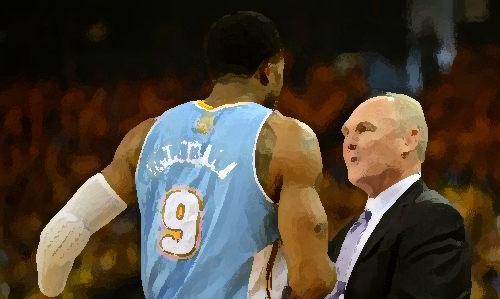 Andre Iguodala and George Karl are gone, slowly fading away…

It has turned out to be quite an eventful offseason for the Denver Nuggets. The team has brought in a new front office, head coach and now a new batch of players. The moves the new general manager Tim Connelly have made, for the most part, have been smart, savvy and sophisticated. Unfortunately, the same moves also signal the end of anything close to resembling contenders in Denver.

The franchise signed J.J. Hickson for the full veteran’s mid-level exception, a three-year deal worth $15 million. This comes after missing out on Andre Iguodala, just a few weeks after team vice-president Josh Kroenke stated that they were extremely confident that Iguodala would re-sign. Hickson was seventh in the league in double-doubles during the 2012-13 season and is just entering his prime, something that can’t be said for the 31-year-old Iguodala. Hickson is only 23 and a former first round draft pick with a lot of potential still waiting to be unlocked.

But there is a reason Iguodala will make $45 million versus Hickson’s $15 million. Iguodala is a dynamic two-way player and one of the best perimeter defenders in the game. Losing Iguodala and his 5.6 Win Shares is a painful loss to the team’s hopes of challenging this coming season.

There is a logic behind the Nuggets’ preference to pay Hickson $15 million over three years versus breaking the bank on Iguodala, the same reason that the team fired George Karl amid reported disagreements on how much to play Javale McGee and Evan Fournier. The team is playing for the future instead of the present, hoping young players will continue to grow and mature under new coach Brian Shaw.

In the latest offseason news, the Nuggets will receive Randy Foye in a sign-and-trade with the Utah Jazz and Golden State Warriors as part of Iguodala signing with the Warriors. Denver also receives a $9 million trade exception. Like the Hickson signing, this is a move for the future. Foye can act as a ball-handler and lessen the load on second-year guard Evan Fournier and rookie Erick Green. Fans of the team should be more excited about the trade exception coupled with all the young assets the team has accumulated as Foye is more of a step sideways than forward, especially compared with the highs of last season.

There was always a question in Denver whether George Karl’s iteration of the Nuggets could actually contend. And judging by their actions this offseason, Kroenke and Connelly didn’t see the team as legitimate contenders, or even close to that. Time will tell if that assessment, of a team that won 57 games and snagged the third seed in a loaded Western Conference, is accurate. In a quick playoff exit, the team was handicapped by Danilo Gallinari’s absence, as well as nagging injuries to Ty Lawson and Kenneth Faried. It would have been nice to see what that core group, coupled with Iguodala and a hall of fame coach in Karl could have done together if healthy.

But the new management team is intent on re-tooling and reloading in for the future. They made a legitimate offer to Iguodala, but he saw the writing on the wall. The Nuggets will now probably be behind the Warriors and Rockets in terms of preseason expectations, especially considering that Gallinari’s injury will keep him out until December.

Golden State gives Iguodala the best chance to win now. It’s hard to blame him for recognizing that and making the move. Funny how one series can change everything. That leaves the Nuggets stuck in no-man’s land, probably battling for a playoff spot and far from being a real threat next year.

Tim Connelly and Josh Kroenke have put their stamp on the team already, and done so in an intelligent way. It will be up to their leadership to lift the team out of NBA purgatory. As for next season, Nuggets fans should still expect entertaining, fast-paced basketball. Coach Brian Shaw will obviously keep elements of Karl’s fast-paced system in place (he already said fans shouldn’t expect the triangle to make an appearance). Just don’t expect a true playoff contender because it’s clear that the guys in charge don’t.