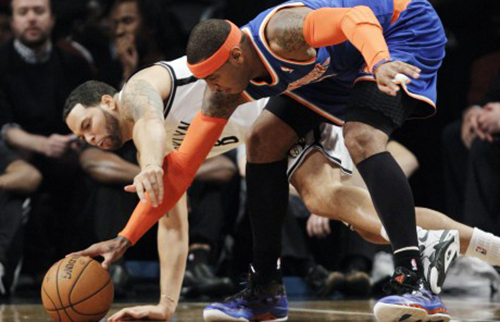 There are a number of different ways to cross the East River to get between Manhattan and Brooklyn. You have the iconic bridges, the Midtown Tunnel, and pretty much every subway line runs between the two boroughs. When the New York Knicks and Brooklyn Nets square off next season, rest assured that every single one of these travel options will be jam-packed with eager basketball fans ready for action, as if they were the ones lacing up the sneakers for 48 minutes on the hardwood.

When the topic of an NYK/BKN rivalry came up last season, the rebuttal was always that there wasn’t enough “history” between the two clubs. But with all the changes brought about by free agency and trades, “history” is about to change really soon. The Brooklyn Nets will be welcoming some powerhouse talent to add to their roster, players that have plenty of history with the Knicks. Paul Pierce, Kevin Garnett and, to a lesser degree, Jason Terry, all have war stories of their battles in Madison Square Garden and whenever the Knicks came into Beantown. Looking back at this past season and during the first round of the playoffs, you best believe these three are itching to get to their new team and give some payback.

The toughness that the Nets lacked is more than made up for now. When it comes to trash talking and getting under the opponents’ skin, these nee guys are up there with the best of them. Expect the new trio to instill a culture of smack talking, cheap shots, yo’ mama jokes and some good old-fashioned bad blood for the crosstown rival Knicks. Don’t get me wrong, I’m in no way calling them dirty players, in fact, it’s the complete opposite. When it’s game time, they want to win and they know how to win. You don’t win an NBA title by being the nice guy, so expect the rest of the Nets to fall in line and follow the lead, Brooklyn style. We’re not even going to speak on the new head coach, Jason Kidd, who just happened to be suited up for the Knicks mere weeks before nabbing his first ever coaching job, coincidentally in the same city.

Across the East River, the Knicks are taking note on the moves the Nets are making, and don’t think Carmelo Anthony, Tyson Chandler and crew are going to lay down and concede either. There are decades of pride running through the rafters at the Mecca of basketball and the Knicks don’t plan on letting the new guys take over after just one season. The Knicks split the season series with the Nets last year, in a series that brought us plenty of exciting moments. With the summer to ponder and learn from what went wrong after “Elbow-Gate”, and a few tweaks to the roster, the Knicks still feel they have what it takes to win a ring and end the 40+ year drought. J.R. Smith and Pablo “Primo” Prigioni are back in the fold, Iman Shumpert is beginning to really hit his stride and Raymond Felton will be looking to redeem himself for disappearing in the playoffs.

And don’t forget Amar’e Stoudemire. You heard it here first (and I’m going out on a limb), STAT will be a front-runner for “Comeback Player of the Year” next season. We lost some key players (good luck @optimuscope), and made a few questionable trades (jury is still deliberating on that), so all eyes will be on how head coach Mike Woodson and the Knicks respond to the ever-mounting pressures of winning in one of the toughest markets anywhere.

This is a big city, but at times it can seem really small (like running into a one-night stand when you’re riding the subway with your girlfriend or boyfriend). For years the Knicks have been the main attraction and don’t want to take a back seat to the newbies. The Nets are new to Brooklyn, but moved to a borough that won’t play second fiddle to anybody. With the changes made and the history among players, this crosstown match-up will escalate to an all-out rivalry by the first preseason game, believe it! Regardless how big, this city may not be big enough for both teams, and whatever isn’t settled on the basketball court just might have to be finished in the parking lot.