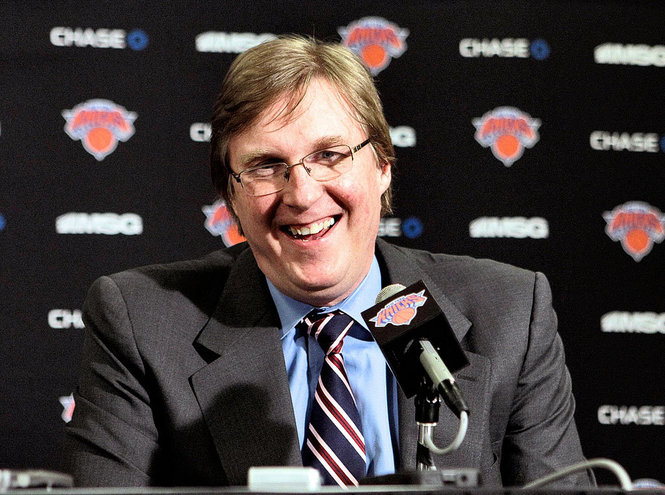 “J.R. Smith’s deal covers a maximum of three years, with a total value of $17.95 million, not the four years and $24.5 million that was widely reported, including in The New York Times, last week. Despite the intense scrutiny of the deal, Knicks General Manager Glen Grunwald made no attempt to correct the erroneous reports during a 16-minute conference call with reporters Tuesday.”

On behalf of the entire Knicks organization, I would like to apologize for our secretive and often misleading conduct over the last few decades. In an effort to be more forthcoming, the organization has taken the unprecedented step of starting a team web blog, where we will post the most up-to-date information available on the state of your New York Knicks. What’s more, to make sure we reach as many of our loyal fans as possible, the organization has signed an exclusive deal with Myspace.com. For a small fee, you will receive regular updates from none other than myself, Knicks General Manager and Executive Vice President Glen Grunwald. While most organizations would delegate such duties to an entry level employee or intern, Mr. Dolan felt strongly that this would be the most efficient, cost-effective way to proceed. As a faithful member of the Knicks franchise, I could not agree more.

Thank you for your subscription! We’ve got some exciting news for you all that figures to make our inaugural post a memorable one indeed.

It has been brought to our attention that some weeks ago, many news outlets reported that we traded Steve Novak, Marcus Camby, Quentin Richardson and three draft picks to the Toronto Raptors for forward/center Andrea Bargnani. As it turns out, those reports were a bit premature. It is with great pride that I officially announce that Quentin Richardson was never included in said transaction, and remains a valued member of the New York Knicks team!

Of course, being a Knick comes with great responsibility, and as such, Quentin has been fined for not reporting to the Las Vegas summer league. We felt that our young players would have benefited greatly from the shining example he has set both on and off the court, and were extremely disappointed that he could not attend. It is our sincere hope that he can play a major role in the development of our training camp invitees come October.

Having just yesterday changed our team policy on consuming print, audio or visual media, we were disappointed and frankly, quite shocked to find that despite the retention of Quentin Richardson, the trade for forward/center Andrea Bargnani has not been well received. Rest assured, we have taken your criticisms to heart, and to prove it, we have named Andrea Bargnani the captain of this year’s Knicks squad. Any concerns that Andrea will not be a good fit on our roster can now be put to rest, as we have ensured that he will play an integral role in creating a winning culture that we can all be proud of.

Wow, you really don’t like Andrea Bargnani. But don’t fret, this next bit of news will be sure to have you chanting our new official cheer: “Bockers, Bockers, let’s go New York Knickerbockers!”

As you all know, this season we will be installing pedestrian walkways above the court at Madison Square Garden. But what you don’t know is that our plan received so much praise that we’ve decided to take it one step further—for the 2013-14 season, all seating will be removed from the arena in favor the world’s largest elevated pedestrian walkway! Obscuring the play below in its entirety, this awe-inspiring walkway will immeasurably improve the fan experience, providing a superb view of our new, ceiling-mounted 60-inch LED TV.

It is with a heavy heart that we announce the termination of Knicks general manager Glen Grunwald. Although he proved himself to be an adept front office executive, it was the determination of Mr. Dolan that he was not sufficiently able to balance these duties with his obligations to this web blog. We wish Glen and his entire family the best of luck in their coming endeavors.

That aside, we are pleased to reintroduce the once and future general manager of the New York Knicks, Mr. Isaiah Thomas. Mr. Dolan is confident that by granting him a second chance, we have moved ever-closer to securing our second championship in 40 years.

Also, we traded Shumpert to the Nets for cash.

To Whom It May Concern,

This is Glen Grunwald, August 2, 2013. I pray that Dolan doesn’t get his hands on this message. I am currently in the bowels of Madison Square Garden and if you’re listening, please … tell my children that I love them very much.

I know this is going to sound crazy but you have to believe me—it’s the truth. When James Dolan called me into his office to fire me, I noticed some strange noises coming from his bathroom. James kept telling me not to go in there, but I really had to go, and when I went in what I saw…. It was James Dolan’s son, only, it wasn’t. He was wearing Isiah Thomas’s face—like a mask. It was just like Face/Off. IT WAS JUST LIKE FACE/OFF!!!

It’s me, James. There’s been a lot of wild rumors making the rounds through the media lately and I just wanted to take the opportunity to clear the air myself.

For one, there is no Isiah Thomas conspiracy. The very notion is flat-out absurd, and frankly, sounds like the childish musings of an amateur comedy writer. To put it bluntly, Isiah Thomas is alive and well.

Second, although Glen Grunwald’s accident was no doubt a terrible tragedy, I had nothing to do with it. I have full confidence in our nation’s legal system and trust that my innocence will be proven in a court of law.

Third and most important is a bit of sad news. Due to the extraordinary lawyer fees I will no doubt incur in the coming years, I have decided to sell the New York Knicks franchise. I’m sure this comes as a major shock and disappointment to all of you, and for that I humbly apologize. Of course, all clouds come with a silver lining, and I am happy announce that I have sold the Knicks to none other than Chris Hansen and his Seattle-based investment firm. The team will henceforth be known as the Seattle GoGoBockers. A fond sayonara to our favorite basketball heroes!

Until we meet again,