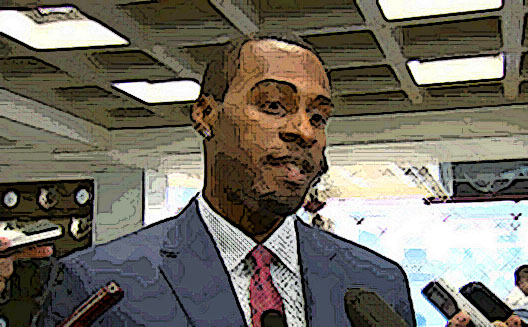 Minnesota Timberwolves rookie Shabazz Muhammad was sent packing from the NBA’s Rookie Transition Program for a rules violation, as he brought a female guest into his hotel room Tuesday evening. Close to 50 rookies and players are participating in the program ending on Friday, which aims to help players adjust to NBA life. For four days players will listen to remarks from current and former NBA players, participate in interactive workshops, and receive counsel on frequent issues players face in the league.

The NBPA and NBA jointly created the program in 1986, and it holds a reputation as one of the most thorough introductions to the league. Players were given rules for the program—which included no guests unless approved by administrators—only hours before Muhammad was excused. The 14th pick in the draft will have to return next summer and complete the program with the 2014 draft class.

Shabazz isn’t the first player (and won’t be the last) to be removed from the program. In 2008, Mario Chalmers and Darrell Arthur were also expelled due to a drug policy violation, which led to $20,000 fines. First, let me say kudos to Mr. Muhammad who most likely purposefully got himself kicked out of the Transition Program in order to spend four days with a more talented draft class this time next year. In all seriousness, the main flaw with this program is its timing. It’s a great way to prepare younger players for the NBA lifestyle, but it would be better received during the combine – when young guys are more basketball focused and attentive (because their future job depends on it). Also, it’s great information for guys on the top and bottom of the draft board, and would be very beneficial for those who don’t get drafted and end up in other leagues.

I’m not letting Mr. Muhammad off the hook, because he did break the rules, but when Shabazz was thrown out it had been 60 days since draft night. Many of these young men are going from poverty to wealth, and 60 days (much less a year) is not enough time to celebrate that success. Commissioner Stern has started every NBA draft with a variation of “Today marks the culmination of years of dedication and hard work.” After all the blood, sweat, and hours in the gym in preparation for the draft, not to mention the NBA summer league, our young lads deserve a bit of time off until training camp, or at least the opportunity to participate in such an essential event when they’re most receptive.

When my name is called on draft night (most likely as the first pick due to my mean bank shot), I will quickly hug my parents and friends, shake hands with commissioner Silver, and call Sofia Vergara the moment I sprint off stage to alert her of my newly-achieved wealth. While we’re having a deep, meaningful and romantic conversation, I’m going to put her on hold to dial Serena Williams—and eventually merge calls. Next I’ll meet them both at an undisclosed location, after being chauffeured by my Junior High basketball coach who cut me (yes I’m still not over it). It’s my draft fantasy so you can guess the rest! I asked some of my fellow BMFers what the first few things they’d like to do after being drafted are, and here’s what they said:

Ciaran Finn
1. Do some PEDs because all the cool kids seem to be doing them these days.
2. Try and get picked up in another sport. There aren’t enough inter-sport athletes. Wikipedia fact about Tim Duncan – he was a competitive swimmer in the U.S. Virgin Islands; endeavored to make the 1992 Olympic Games before Hurricane Hugo took out his town’s only Olympic size pool.
3. Edit my character on NBA2K14 and over-inflate my stats.
4. Jennifer Lawrence… dat gap.
5. Remake “Space Jam” featuring Lebron and Ryan Gosling.

Charlie Zegers
1. Bribe whoever I can to get MTV to bring back the Rock & Jock basketball game.
2. Commit a Charles Oakley-style “no layup rule” foul on Justin Bieber.
3. Commission a bronze statue of the last NBA player (before me, of course) to come out of Fordham – Mr. William “Smush” Parker.
4. Get on Twitter, claim my account was hacked.
5. If Amar’e Stoudemire can buy a professional team in Israel, I’ll buy one in… Guam?

Josh Lowery
1. Get a pornographic tattoo on my arm so I have an excuse to wear an elastic sleeve like all the cool kids.
2. Start a political blog because my having been drafted makes my thoughts on such matters all the more important to society.
3. Send DeAndre Jordan flowers in exchange for him never posterizing me like he did Brandon Knight.
4. Buy a copy of “My Fair Lady” as a crash course in how to blend in with aristocrats.
5. Register for classes at the Antoine Walker School of Personal Finance.

Mister King
1. Tip a homeless guy, even if it is for a beer.
2. Invest in shoelace tips.
3. Pay my salary for a year to get rid of skinny jeans.
4. Party at Chuck-e-Cheese.
5. Buy an 8-track player and all the Lionel Richie 8-tracks I can find, including the Commodores.

Ryan Crane
1. Hire the best graphic design and PR team in the country to craft, brand and then promote my own kick-ass logo – preferably the customary silhouette form, but with me in the middle of a no-look chest pass.
2. Initiate a summer basketball camp in Malaysia – mostly because I just want to go to Malaysia.
3. Do a Grantland podcast with Bill Simmons and Jalen Rose.
4. Pay an intern to carry out all the dreary rookie-hazing duties that are sure to come my way.
5. Challenge Larry Bird and Michael Jordan to a televised game of HORSE. Winner gets a Big Mac.

Robert Scalice
1. Buy DeAndre Jordan a post move.
2. Offer Rick Kamla a very lucrative incentive for each telecast he gets through without using a cheesy, outdated, slang term.
3. Purchase a caseload of various “How To” basketball coaching manuals and have them shipped to the Barclays Center in Brooklyn, to the care of Jason Kidd.
4. Buy office space and install state-of-the-art studio equipment in anticipation of DV, Frankie, Bryan and Artem forming “BMF Radio,” the first (that I know of) 24-7-365 all-NBA radio talk show.

Colin Flosi
1. Update the rosters on NBA2k and create a franchise with the team I was drafted by. Then proceed to trade away everybody in front of me on the depth chart and become a starter before game 1.
2. Change my Facebook “works at” to “The NBA.”
3. Rent out a tattoo shop for two days of straight tatting, so I can fit in with the rest of the league. Maybe even call in a barber and get a flat top while getting tatted.
4. Let my intentions be known that I want to become the first NBA player ever to wear #69.

Ryan O’Meara
1. Pay Allen Iverson to be my financial advisor.
2. Pay Kevin Garnett to burn all of Craig Sager’s clothes.
3. Pay someone to hypnotize Charles Barkley so he will never play golf again.
4. Buy a Komodo Dragon and tell Gilbert Arenas it is cooler then a pet shark.
5. Go into a crowded bus station and make it rain!

Managing Editor, Frankie Lloyd
1. Pay back assorted drug dealers and college coaches for all the under the table money they gave me. Not! I’m spending all this loot myself. I’M RICH, BEEEEOTH.
2. Call Allen Iverson, Qyntell Woods and Bonzi Wells and see if the want to party.
3. Change my name to Hatefull Regional Violence.
4. Find a copy of J.J. Redick’s abortion clause and insert my new name.
5. Ask to be traded to a contender.

Editor-in-Chief, DV
1. Pay Craig Sager his salary for a year to wear plain old boring suits.
2. Pay Lawrence Frank his salary for a year to wear Craig Sager’s suits.
3. Start a covert website campaign with ridiculous amounts going into marketing to get Shaq fired from TNT.
4. Buy a nice house in Malibu and make it a transient shelter because it’d be great to see the reactions from neighbors.
5. Get a haircut… for Andrew Bynum.