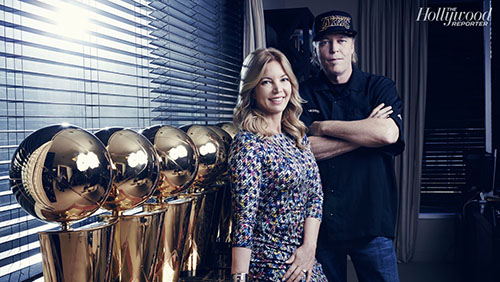 The Los Angeles Lakers ownership has been a point of scrutiny since before Dr. Jerry Buss passed in February. Dr. Buss left the Lakers primarily in the hands of his two children: Jeanie Buss and Jim Buss.

Jeanie is beloved by Lakers fans, for many reasons. One is that she doesn’t take herself too seriously, as evidenced by posing for Playboy and using a racy pic for her Twitter profile. Another reason is that she’s engaged to Phil Jackson, and the Zen Master wouldn’t be with anyone less than the best, right?! The third is that it’s widely thought that she’s smart as a whip, and certainly brighter than Jim.

However, why does Jim get such a bad rap amongst Lakers fans? Well, he’s credited with the disastrous Rudy Tomjanovich hire, drafting Andrew Bynum (who the jury is still out on) and is also thought to be responsible for hiring Coach Mike D’Antoni. You can probably tack on some other things here, depending on who you ask. He was once spotted streaming horse races while he was supposed to be scouting, and later said that 10 fans in a bar could scout as good as the pros. (NOTE: Jim is probably not given enough credit for the trade that brought Chris Paul to the Lakers, but was vetoed by the NBA office).

Now that their father has passed, the greatest owner in the history of American team sports, Jeanie is left to handle the business side of things, and Jim the basketball side, which both have reiterated is the way that their dad wanted it.

Jeanie can usually be found in her El Segundo office, but Jim prefers to work from home – another troubling thing, since the players will likely find it hard to connect with an owner like that. This is an important aspect because Dr. Buss was known for his rapport with players, and it was a big reason they wanted to come play for him. Using Dwight Howard as a case study, Jim didn’t spend much time with the big man, which was another likely reason that D12 chose to leave. whether you wanted Howard to go or stay is neither here nor there; the point is that Jim didn’t do the due diligence his father would have, and Dr. Buss likely wouldn’t have viewed it as “due dilligence.”

So, now there’s this power struggle, which is starting to play out in the media.

Jeanie recently told ESPNLA 710 that it’s hard for her to not be in all of the meetings, and to still be held responsible for the decisions that are made in them. She told The Hollywood Reporter:

“My brother ultimately makes the [basketball] decisions. I defer and will continue to defer because that’s what my dad believed would be successful. I would be more comfortable if I understood what the decision process was, and I’m not always involved in it. To be held accountable by the league and not have a seat at the table when decisions are made is hard.”

“I don’t run the franchise. We run it as a family. I’m just a figurehead. I like it collective. Now I might have to put my name on a [decision], but I can’t have the ego to make those calls alone.”

Two very different answers from the both of them. Clearly, Jim feels that he’s asking for Jeanie’s input, while she feels that she’s being kept in the dark.

THR also dug up some interesting info about the D’Antoni hire. A source said:

“The Lakers went into that week prepared to offer the job to Phil. Dr. Buss may have rubber-stamped [the D’Antoni hiring], but he clearly wasn’t at the helm. If he had been healthy and involved, that never would’ve happened.”

Jim sticks to his guns that he has no problem with Phil, and would have him as a consultant, but nothing more. Phil has already acknowledged that just by being engaged to Jeanie, he’s a consultant by default and gives his opinions on things to her, which is, by definition, a consultant.

There are many who will say that Jeanie is the brighter of herself and Jim, but one league exec disagreed saying, “Jim is an easy target. But he’s smart, no question about it. He’s smarter than Jeanie.”

There’s no doubt that there is a struggle with how things should be run within the organization, but one thing is clear: things have to change for the Lakers.

Jeanie echoed this in her ESPN radio interview, saying that they’d lost the best closer in the business when Dr. Buss passed away, and as one NBA agent said:

“The Lakers were built for a different era. Their personnel has been depleted and [research] infrastructure is outdated. It’s important to be in a major market, but not as important anymore. And they were always able to spend more than other teams. Now they can’t.”

Lakers fans are not used to having much of a turnover time between losing stars and picking up new ones, and there is no such thing as “rebuilding” in Laker Land. However, it seems that things may need to change since there is clearly a front office divided.

Luckily, they still have one staple who can help keep Dr. Buss’ championship vision alive while his kids figure it out: Kobe Bryant. Granted, there’s no telling what kind of Kobe will hit the court next season. No one wants to win as bad as the Black Mamba, and Dr. Buss. Kobe said:

“You can tell by how someone runs their business if they’re full of shit or not. [Dr. Buss] could tell you exactly what he had in mind and how he planned to get it done. And he had a track record.”

Jeanie and Jim still have to establish that “track record” and until they do, it will be hard to draw stars to the team, because they’re not exactly sure what they’re getting. This season will be huge for the Buss kids’ legacy, especially with the impending 2014 free agency next offseason.

If they can somehow come together, then there’s no doubt Jeanie and Jim can keep the Lakers’ spirit alive, but it will take the softening of some egos first.