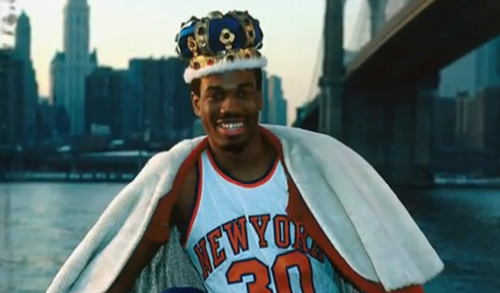 Even though I was young, I remember Bernard King’s greatness, and yes he was great. Before Michael Jordan, before Kobe Bryant, before Carmelo Anthony, Bernard was the King. He was the scorer that everyone had nightmares about, but more than that he was a model of hard work and determination.

New York City born and raised in the Fort Greene section of Brooklyn, King got his toughness on the housing project basketball courts and the streets. That toughness just amplified as he continued through a stellar collegiate career at the University of Tennessee, and on to his being drafted by the New York Nets (who later moved to New Jersey) in 1977. From the moment he entered the league, he proved himself a talented scorer.

In 1982, Bernard King was traded to his hometown New York Knicks and the legend was born.

His scoring average jumped every season, from 21.9 PPG in 1982-83 to 26.9 PPG in 1983-84. On Jan 31, 1984, King went down to Texas and smoked the San Antonio Spurs for 50 points. He turned around the very next evening and toasted the Dallas Mavericks for another half century. His name was cemented in NBA folklore and he became an NBA All-Star for the second time in his career, along with his first of two All-NBA selections. His on-court dominance increased with his league best 32.9 PPG in an epic 1984-85 season which saw King drop an incredible 60 points against his former team, the Nets, on Christmas Day. That record still stands as the most points scored by any NBA player on Christmas. Santa couldn’t have delivered a better game. He followed that up by sinking another 55 points on Feb 16th of that season against the same New Jersey team. He was as pure a scorer as the league had ever seen. He could drive, post up, run the break and his pull-up jumper was so deadly it came with a warning sticker.

Unfortunately for Bernard, he played in an era of Super Teams. There were the Los Angeles Lakers with Magic Johnson, James Worthy and Kareem Abdul Jabbar. The Eastern Conference had the Boston Celtics with Larry Bird, Robert Parish and Kevin McHale. There were also the Philadelphia 76ers with “Dr. J” Julius Erving and arguably the best team in the league at that time. Bernard was by himself, and he singlehandedly put the Knicks on his back and went toe-to-toe with the powerhouse teams in some of the most historic playoff battles ever seen on the NBA hardwood. Had King ever been given the opportunity to play alongside another star then maybe he would have been the one to end the championship drought that’s been haunting New York since Walt Frazier took us to the promised land in 1973.

As luck (or un-luck) would have it, Bernard suffered a devastating knee injury that would derail his meteoric rise. At that time, the severity of a torn ACL threatened him ever returning to the game. But never doubt The King. He did return back to the court in 1986-87. The Knicks had drafted Patrick Ewing the season before out of Georgetown University but the two never played one game together. Ewing was injured for the six games that King played that season and the Knicks doubted Bernard could return to his dominant self, so they foolishly didn’t re-sign him the following season. Had Ewing and Bernard played together, a championship was all but a guarantee.

The 80’s produced a plethora of would-be all-time greats. Ask any of them who was the toughest player to stop and of course Michael Jordan comes to mind, but he did his damage in the 90s. The name that still resonates through those social circles is Bernard King. The what-ifs will go on forever. What if he never got hurt? What if he played with Ewing? Remarkably, King worked his way back to elite status. In 1990-91 he averaged an amazing 28.4 PPG (third only to MJ and Karl Malone) with the Washington Bullets, destroying the Knicks that season by scoring 49 points in a heartwarming return to Madison Square Garden. He had made it back. As he’s done all his life, he defied the odds and even returned to the NBA All-Star Game. But the injuries finally took their toll forcing his retirement after the 1992-93 season. Thus ended a great, but what could have been even greater, career.

Though his time in New York was short, he will always be looked at as one of the all-time Knicks legends, and rightfully so. He was a dynamic scorer, but his gritty play and tenacious style was much more valuable. Injuries totally cramped what would have surely been one of the most illustrious careers of all-time. Still, once a Knick, always a Knick and Bernard is King of the City. He was recently enshrined into the Basketball Hall of Fame. The next step is retiring his number 30 Knicks jersey (hint, hint). Long Live the King.