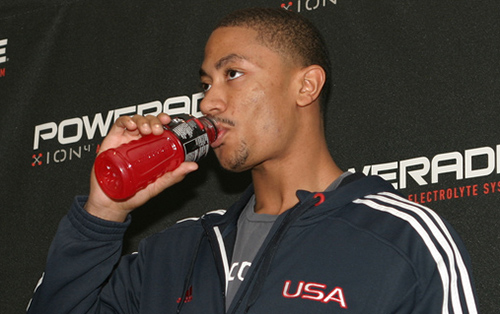 That’s it for the preseason. Playtime is over and it’s time to get down to business. As the regular season looms next week, teams are trimming their rosters to what they will be at the start of the new campaign. Some teams look ready to run, others look ready to rebuild. There have been some surprise teams, and teams we expected to be right where they are. Here’s what I saw last week 10/20-10/26.

King of the Court
LeBron James and Dwyane Wade are looking up to form for the Miami Heat. Derrick Rose and Chris Paul have both been amazing. But the man of the week is Carlos Boozer … what??? That’s right, Boozer the Bruiser is back. He’s looking like he’s returned to the double-double form he had back in his days with the Utah Jazz. With Joakim Noah out with injury, Boozer is dominating inside and making 20-10 look easy. No wonder the Bulls were the only undefeated team in the preseason. Of the teams in the East, the Bulls have a legitimate shot at dethroning the Miami Heat, and Carlos Boozer will need to continue this play in order for that to happen.

Rising Star of the Week
The youngsters want their time to shine. Damian Lillard and Anthony Davis have been impressive but I’m liking what Isaiah Thomas of the Sacramento Kings has shown this preseason. He’s in much more control, his shot is looking sharp and, either starting or coming off the bench, everything seems to be working for him. The Kings had a close loss to the Portland Trail Blazers but followed that up with two impressive wins against the Golden State Warriors and the Los Angeles Clippers. If “Tiny” Thomas can carry this momentum over to the regular season, along with DeMarcus Cousins, the Sac-town Kings will be another team to watch out for in the golden state.

Rookie of the Week
Victor Oladipo continues to be assertive for the Orlando Magic and Kelly Olynyk is showing his versatility for the Boston Celtics. Ben McLemore has been sharp for the Sacramento Kings. But this week’s top rookie is Cody Zeller of the Charlotte Bobcats. While his stats may not be eye-popping, in his limited action he has been very efficient and disciplined. The Bobcats had two solid wins this week over the Cleveland Cavaliers and a comeback win against my New York Knicks, and Zeller provided a spark in both games. While few people expect much from the Bobcats this season, the future looks bright with the young talent they have assembled.

Hero of the Week
It’s been nearly three years since Greg Oden has played in an NBA game, so it’s amazing and inspiring to call Greg Oden from the Miami Heat this week’s hero. He may have only played three minutes and scored only two points, but it was a whole three minutes and those two points came in the form of a pretty manly post move slam dunk. After years of knee troubles, Old Man Oden has made his way back and hopefully will stay healthy and be able to contribute to the Heat’s quest for a three-peat.

Team of the Week
The Houston Rockets seem to be jelling, the New Orleans Pelicans look surprisingly strong, and the Miami Heat are the Miami Heat. However, as the only team to stay undefeated this preseason, the Chicago Bulls are rightfully the team of the week. Led by the return of their leader, Derrick Rose, and the resurgence of Luol Deng and Carlos Boozer, the Bulls are serving notice to the league that they are not taking anything lightly. Coach Tom Thibodeau has the defense ratcheted up, even without anchor Joakim Noah, who is down with an injury. In a recent interview, Rose said this team is ready to compete for a title right now. By the way they have looked, he’s right. Add in Noah, and the Bulls have all the pieces they need to unseat the Miami Heat and win it all.

Game of the Week
Charlotte Bobcats vs. New York Knicks, October 25. After nearly three years and about $1 billion, Madison Square Garden is fully renovated and ready for business. The Knicks, in their first preseason game at home, hosted the Charlotte Bobcats. And though the Knicks jumped out to a huge lead, the Bobcats ultimately battled back and won a close one, with Carmelo Anthony missing the game-tying jumper as time expired. But the silver lining is that MSG is now more state-of-the-art and more fan friendly. Hopefully it will help motivate the Bockers to bring a championship banner home to lift up to those renovated rafters.

Plays of the Week
1. Jumpin’ Gerald Green’s got hops. Inbound plays in Phoenix will never be the same again.

2. The dynamic duo is at it again with this awesome fast break. Sharing is caring.

3. With time running down and his team down by two, Smith plays the role of the hero for his new squad, and villain to the T-Wolves.

Play of the Weak
The Knicks blow a 19-point lead in their preseason home opener, and lose to the Charlotte Bobcats. Let’s blame it on preseason jitters.

Player of the Weak – The preseason jitters should be gone, so next week it’s on!

Team of the Weak – I repeat, the preseason jitters should be gone, so next week it’s on!

Did you see…
The Toronto Raptors vs. Milwaukee Bucks game in Milwaukee was called in the first quarter due to a slippery court. The new retro-designed court looks cool, but not cool enough for a blown ACL. I’m sure that problem will be fixed before next week. On the bright side, fans who attended the game will be able to go to a regular season game instead.

It’s a sad day in the basketball world. I want to send condolences out from Mister King’s Court and Ballermindframe.com to the family of NBA Hall of Famer, basketball great, and a true King of the Court, Bill Sharman, who passed away earlier this week. Sharman, who won multiple championships as a player with the Boston Celtics, then as a coach with the Los Angeles Lakers, was the epitome of a coast-to-coast legend. He continued on with the Lakers as an executive and a major architect in bringing Showtime to the Lake Show in the ’80s. The basketball world will miss the genius and knowledge, along with the raspy voice, of such a magnetic personality. Long live “The Shooter”!

Join us again next week for another visit to Mister King’s Court and follow Mister King on Twitter @misterking730.