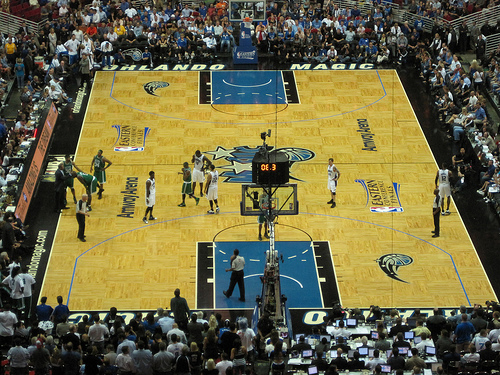 After a hard fought bout on Friday night, the Boston Celtics found themselves with their second win of the early season after defeating the Orlando Magic 91-89. Boston ramped it up across the board after a disappointing start to the game to come from a 12 point deficit to win. The Celtics had six men in double figures, capped off by Brandon Bass’ team high 16 points. Even though they shot a lower percentage from the field and grabbed fewer rebounds than the Magic, the Celtics were able to knock down their free throws and turn Magic turnovers into points, scoring 25 off 20 Magic miscues.

The Magic, looking to extend their impressive three game winning streak, came up agonizingly short on Friday night. The Celtics got after the Magic defensively, frustrating them multiple times throughout the contest. The Magic were led by Arron Afflalo’s 23 points and five rebounds. Center Nikola Vucevic dominated the first quarter of the game, scoring 12 of his 14 in that quarter, but struggled the rest of the way. The Magic shot a dreadful 4-20 from three point range against a Celtics team giving up a mere 27.1% going into tonight.

The Magic, the leading rebounding team in the league through five games, won the rebounding battle yet again on Friday night. They beat the Celtics to the ball on misses six more times, finishing with a 56-50 edge in total rebounding for the game. However, the team struggled keeping the Celtics off the offensive boards, giving up 19 offensive rebounds. However, the Magic were able to limit the Celtics to ten second chance points, showing that the defense was getting after shooters on second chance opportunities.

The Magic came into the game third in the league in defensive rating, and ninth in points per game allowed. The defensive effort was there all night, holding the Celtics to 35.8% from the field including 14.3% from downtown. However, the Magic were only able to force 11 turnovers on the night, turning those into eight points. The continued defensive intensity and hard work is a good sign for the young Magic after they struggled most of last season.

Keeping the Pace Up

One thing that coach Jacque Vaughn has preached this season is the team getting out in transition more and scoring on the fast break. They were able to get out and run some on Friday night, and do it efficiently. The team finished with 20 fast break points on 7/9 shooting. Unfortunately for the Magic, their half court offense let them down against a pesky Celtics defense.

Free Throw Struggles
While the Magic, who set a record for fewest free throw attempts per game last season, were able to get to the line 29 times on the night, they only shot 65.5% from the line. Compared to the Magic, the Celtics had three fewer attempts from the line, but were able to make two more, the difference in the game. The 29 attempts were a season high for the Magic, which is a step in the right direction for the team.

Both teams are back in action tomorrow night, with the Magic traveling to Atlanta to take on the Hawks while the Celtics take a trip down further south to take on the Miami Heat.

When asked about the Celtics ball pressure

“I think overall they have a good defender in Avery Bradley who can extend his defense some and pressure the basketball. A couple times he was able to do that and get into us a little bit.”

On Arron Afflalo’s shot at the end of the game

“Good execution by our guys. The shot was for Arron; he ended up making it. If his feet were a little smaller we would be in better shape. Good look, good execution down the stretch.”

“I think that one thing with turnovers, that didn’t help us initiate our offense and then secondly they did a good job of trying to deny him the basketball. You’ve got to gie them credit for their defense.”

“We knew that would definitely be a comment if we lost. I think we understood that. This team went through a lot last year and understands how valuable wins are. Outside of our opener, we lost two games that we felt we should’ve won. We are learning and it’s a process but I do think that we came to play tonight. I just think focus has to be a little sharper for the team that’s trying to beat a team that just won three in a row.”

“I thought we started the game really well. Built up a nice lead like the last game, they made a run and obviously we didn’t respond the right way. It’s frustrating because we should have responded.”
Victor Oladipo

“There are going to be lots of mistakes and there’s going to be wins and losses. But you’re measured by how you bounce back from them.”

Stat of the Night:

After giving up four points in the paint in the first quarter, the Magic gave up 44 the rest of the game and ended up losing the battle 48-42 on the night.

You can read more about the Orlando Magic here