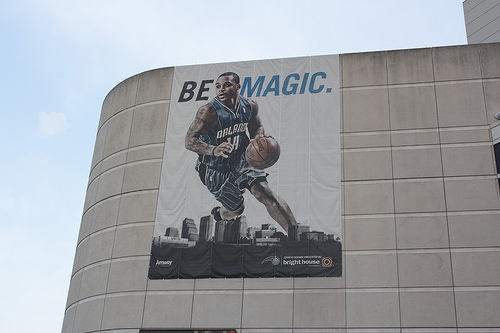 Well, first of all, I think David Stern and the NBA hate the Orlando Magic!

After a long, long, long wait, the Association is back and underway. That said, there were, as usual, only three games on opening night and two were nationally televised. One was shelved in the pay-per-fist ticket.

The Orlando-Indiana game was buried, of course. The NBA is all about favorites. Most of us understand that, but don’t let us witness the neglect. If the Milwaukee Bucks and the Charlotte Bobcats play each other, the NBA will ignore that game.

One would think that with two already-televised games, the third would be shown on NBAtv, but no(!), instead they chose to show old rerun episodes of NBA 90s instead.

Having expected this, I called and scheduled the NBA League Pass, just to catch my Magic.

But the NBA League Pass was giving some half-hour by half-hour special, therefor I had to remember to record each half an hour of the game. It worked out to about a quarter each 30-minute block in the first half and double that in the second half. That is normal.

During the lockout, the NBA pledged to boost the wayward teams, but it has failed. Superstars have the control.

I just picture David Stern and his people in his office discussing television rights and such, and everyone smoking cigars and talking television rights, and one dude meekly saying we should show the live Orlando-Indiana game. Everyone scoffs. It ends with that one fellow having his throat slit, and everyone agreeing to show NBA 90s again, because, after all, that was Stern’s proudest moment in time.

Back to the matter at hand: Our Orlando Magic.

The Pelicans, the Kings, the Bobcats, all of these teams NBA teams are neglected in the grand scheme of things. And I get it, unpopular teams are shelved in the sideline.

The Magic came out with loose limbs, limp wrists, and slow legs in the first quarter. The Pacers went up 12 to 2 in just a few minutes, but the Magic rallied back and took the lead. The rookie, Oladipo, didn’t start. But he came in and, despite a few turnovers, gave a good showing.

It was Andrew Nicholson who gave the performance of the night. Andy Nick, as I call him, had 18 points in the first half.

The Magic eventually lost the match, but they gave some hope to the hopeless fans out there, who are further discouraged and disenfranchised because the NBA would rather show re-runs than a live game.

The next night saw the Magic face a tough Minnesota Timberwolves team. With a returning Kevin Love and a home opener, the Magic silenced a few players and fans down the stretch, battling the T-Wolves to overtime after a handsome Kevin Love game-tying shot.

A dagger to the heart, as my friend Brian Lufkin would say, but this game should still encourage developmental confidence in fans and players alike. We are a scrappy young team, not to be overlooked. Granted, we have a long, long way to go; we need to get way tougher and even smarter. The first two games, despite the show of indifference (which is almost worse than hate) from the powers of the NBA, were exciting because of the possibilities.

A typical NBA season is like a rocky teenage love triangle, especially for fans and players of small-market teams. We bite and scratch just to get dumped at the Universal Skating Rink, but we will rebound. And, like I have always said, rebounds win games.

There is a lot that goes unsaid in the business of basketball. Even this article was edited for content concerning the commissioner. The NBA isn’t entirely unfair, but it does cater to the popular, the big markets, the superstars.

As a fan, I want to be reassured. Reassured that the NBA is for the fans.