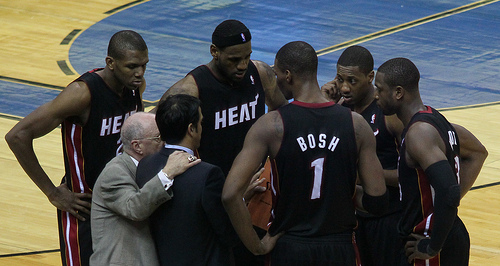 Basketball season is in full swing, and the Miami Heat have their eyes on a third ring. The three-peat is a hard feat to accomplish, but LeBron James, Dwyane Wade, Chris Bosh, and their supporting cast are ready to take on all challengers. The big question is this: who can beat the Heat? In order to accomplish that task in a playoff series, a team needs to exploit the Miami’s weaknesses and slow down their strengths.

Heat Breakdown: The team is a juggernaut on offense, scoring more points per 100 possessions than any other squad out there. The team converts rather efficiently from just about everywhere on the court, and they have King James and the Flash, two of the best finishers in the game. They also have Chris Bosh and his deadly mid-range jumper. Last season, as a team, they shot a whopping 49.7 percent from the field, best in the league.

The Heat also play a tenacious style of defense that frustrates opponents. They swarm ball-handlers, put pressure on all spots, and have a Defensive Player of the Year contender in James. According to HoopData, their defensive efficiency was the seventh best in the league last season, at 100.5. They have a stingy style of defense that results in many turnovers for their opponents, and easy fast-break points and more possessions for the Heat.

The squad to take them down will need to be a defensive-minded group with the athleticism and savvy to contain the Heat. They also need to exploit Miami’s lack of rebounding talent. On the boards, the Heat aren’t very impressive. Last season they had a -2.1 per game rebound differential that ranked 24th in the league. The team that has the best chance at dethroning the top dogs needs to have big men to expose Miami’s weakness around the rim.

So, which teams have the most potential to snatch their crown?

With a defensive-minded coach in Tom Thibodeau and a cast of players that are honed-in on defense, the Bulls have a chance of stopping the Heat three-peat. Right now, the Bulls aren’t looking too great, but that should change in time as Derrick Rose finds his footing again. They are one of the best defensive teams in the league, ranking fifth last season in defensive efficiency at 100.3. They also have the big men that can get the job done on the boards and provide some solid offense. Joakim Noah is one of the best centers in the league, and five games deep into this season he‘s averaging 10.2 rebounds per game, along with 1.2 blocks and 1.4 steals. There’s also Carlos Boozer, a big man that provides solid production in the post with 18.2 points and 8.6 rebounds per game. As far as containing LeBron James, the Bulls have a couple of players that can do that rather well: Jimmy Butler and Luol Deng. Not to mention, when D-Rose does gets back to where he left off, he’ll be creating problems for Miami’s point guards.

They’ve met once already, and the Nets barely got the W. Paul Pierce and Kevin Garnett are two veterans that still have that competitive spirit in them to boost the Nets from good to great. Pierce and KG have given LeBron difficulties in the past, and it seems that at times the King still has some problems playing against those two. Brooklyn has the big guys to do damage down low, including Brook Lopez, who’s averaging a little over 20 points, adding 6 rebounds and 2.3 blocks. Another factor that have some fans speculating that they can do the deed is that they have Jason Kidd as their coach and Jason Terry coming off the bench, two key players on the Dallas Mavericks team that beat the Heat in 2011. “We have the formula,” Terry said to slamonline.com. “Jason Kidd and I are the only ones to crack the code.”

Last season the Pacers forced the Heat to a Game 7 in the Eastern Conference Finals and proved that they are a worthy match against the defending champs. They exploited the glaring weaknesses of the Heat, their size and depth inside, and made it a hard-fought series. The Heat tried to bulk up down low with Greg Oden this offseason, in order to take on the likes of Roy Hibbert and David West. Hibbert is one of the best in the 5 spot, averaging 10.9 points, 9 rebounds, and an exceptional 4.3 swats per game. They also have a rising star in Paul George, who has the confidence and defensive prowess to go head-to-head with King James. Their rivalry will more than likely build, and the Pacers will continue to grow as a force to be reckoned with.