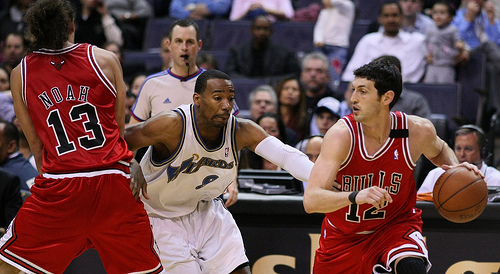 It’s been well over a decade since the Chicago Bulls won a championship, but fans seeing red believed they had a shot at another one this year with Derrick Rose back in the lineup. If one thing is true about life, it’s that anything can happen. Rose suffered a torn medial meniscus in his right knee, and it’s been announced that he will undergo surgery. This isn’t as bad as an ACL tear, but it’s going to be another grueling test for Rose to sit on the sidelines for another long stretch.

So what now for the Bulls?

So far, the Bulls haven’t been as impressive as one might expect them to be, and we’ll see them struggle without Rose. However, it’s early in the season and they’re still a team that’s worthy to be feared, even though the Indiana Pacers are the  best bet to cool down the Miami Heat in the East. There are a few things the Bulls could work on to stay afloat as they wait for Rose to rise again.

With Tom Thibodeau as the shot-caller, the Bulls are one of the best defensive teams in the NBA. It’s always been their strength, as they frustrate their opponents with suffocating defense, especially in the paint. One problem that’s become evident early this season is their defense against the three ball. Right now, they’re allowing their opponents to make 39.1 percent of their shots beyond the arc. Last year their rotations were solid, but for one reason or another, their rotations on the wing have been slow. Something tells me that Thibodeau and the Bulls will get that percentage down to the low 30s once they find their stride mid-season.

The Bulls have been shooting an amazing 84 percent from the charity stripe. A handful of Bulls have improved their free-throw shooting percentages, most notably Luol Deng, who’s shooting 90.2 percent so far this season from the free-throw line. So what’s the gripe here? As a team, they should be getting to the line more often. They are ranked 17th in the league in free throws attempted per game, but with their team free-throw shooting percentage, they should get to the stripe more often.

Overall, the Bulls have been showcasing a sub-par offense at best so far. For the first several games, Rose wasn’t exactly fusing well with his team, taking ill-advised shots and making questionable passes. Just when he started to find his groove, Rose goes down. The rest of the team must step it up once again, but this time they know what to do since they’ve played without Rose before. Deng needs to find his touch from beyond the arc because 18 percent just won’t cut it, and when Jimmy Butler gets back, he needs to continue to be aggressive and become a scoring threat. Everyone needs to step their efforts up to fill the gap.

Will these adjustments keep them as a strong contender in the East? Yes, but how far they’ll get without Rose in the lineup is questionable. For the Bulls, everything is up in the air, suspended in beautiful chaos.

When/if Rose gets back this season:

How long Rose will sit out can’t be officially decided upon until after the surgery to his right knee is performed. The worst-case scenario is that he’ll be inactive for six months or longer, meaning that he’ll miss the regular season and basketball heads will continue to re-invent the “Rose is year-to-year” joke in as many ways possible until he steps on the hardwood again.

Watching the Bulls’ first several games, it seems to me that the D-Rose of old isn’t what the Bulls need anymore. His game needs to evolve because his body seemingly won’t survive all the quick cuts and explosions to the basket; his speed is a blessing and a curse.  In his MVP season, Rose carried the team offensively when times got tough and willed them to victory. Since the Bulls learned how to be efficient without the former MVP last season, and will continue to do so this season, Rose needs a more complete style of play to accommodate the improvement of his team and lessen the wear-and-tear on his body.

The Bulls have a solid chance of surviving without D-Rose because they have enough talent and will to do so. As for Rose, we’ll be anticipating his return once again, and pray that he makes a speedy and full recovery so that we can dub him the Rose that grew from concrete.