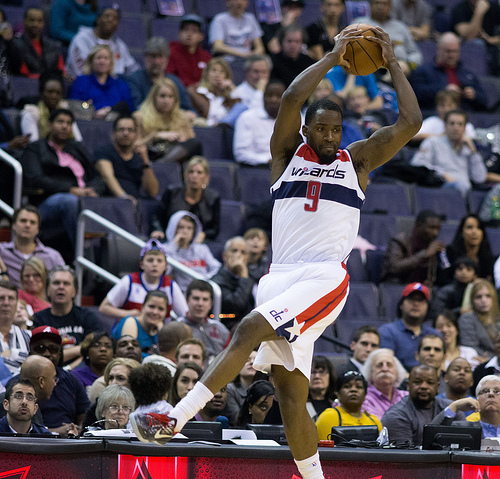 A week removed from losing guard Bradley Beal for at least two weeks, the Washington Wizards continued their hot play, defeating the Orlando Magic 98-80 on Monday. Since the Beal news broke, the Wizards have gone 4-1, propelling themselves back to the .500 mark on the season. The win was the Wizards’ third in five meetings against the Magic dating back to last season.

The Wizards were led by Trevor Ariza, who scored 24 points on a scorching 8-of-9 from the field. Speedy point guard John Wall chipped in 16 points and 13 assists, while bigs Marcin Gortat and Nene combined for 27 points, 11 rebounds and three blocks. Five Wizards, led by Chris Singleton’s 11, poured in 26 points off the bench.

After getting blown out at home on Friday, the Magic embarked on their longest road trip of the season, a six-games-in-10-nights stretch, on Monday night. From the start, the Magic looked sluggish and lost, allowing the Wizards to go on a 15-0 run early. Orlando was never able to get their offense going, scoring a season-low 80 points on the night.

Continuing his hot play to begin the year, Arron Afflalo led all Magic scorers with 21 points. Maurice Harkless added 16 points off the bench, while Victor Oladipo and Nikola Vucevic added 13 and 10 points respectively. Outside of Afflalo, the Magic starters really struggled, with two of the five—Glen Davis and E’Twaun Moore—combining for eight points on 2-of-16 shooting.

After an opening month that saw him put up 21.4 points, 4.4 rebounds and 4.3 assists per game, Arron Afflalo kicked off the month of December with another good game. Afflalo led all scorers with 21 points, while shooting 10-of-16 from the field. The seventh-year guard from UCLA has played some of the best basketball of his career thus far this season. He’s been the Magic’s best player and could garner All-Star consideration if he continues to play at this high of a level.

After five games of single-digit scoring, second-year forward Maurice Harkless has shown signs of finding a rhythm the last two games. After an 11-point night on Friday, Harkless scored 16 points and was all over the court Monday night, causing havoc from the moment he stepped on the floor. In 13 first-half minutes, Harkless contributed 6 points, 2 rebounds, 2 steals and 2 blocks, while looking like a potential lock down defender. Harkless showed a comfort level all night, knocking down jumpers, driving to the hole and being tenacious on both sides of the ball.

Coming into the night, the Magic ranked ninth in three-point shooting percentage at 38.2 percent, making an average of 7.9 threes per game. However, Monday night was a different story. The Magic shot an abysmal 3-of-15 from deep, being outscored 27-9 from the three-point line. The Magic also shot 39 percent from the field, which included four of five starters shooting under 50 percent. Bad shooting nights happen, but if they continue on the road trip, it could be a long week and a half for the Magic.

From the start, the Magic were sloppy with the ball, turning it over 11 times in the first half. While the Wizards failed to convert many of the Magic miscues into points, the team’s inability to control the ball killed any momentum the offense had going. While they took control of the ball better in the second half, finishing the game right around their season average with 17, the early miscues cost them dearly. It’s been a problem for the team all season, and if it continues to be, the Magic will see the losses begin to pile up.

Four of the five Magic starters—Glen Davis, Nikola Vucevic, E’Twaun Moore and Victor Oladipo—all had +/- ratings of -19 or worse. Davis finished with the worst, with -29. Those four were a combined -91 on the night.