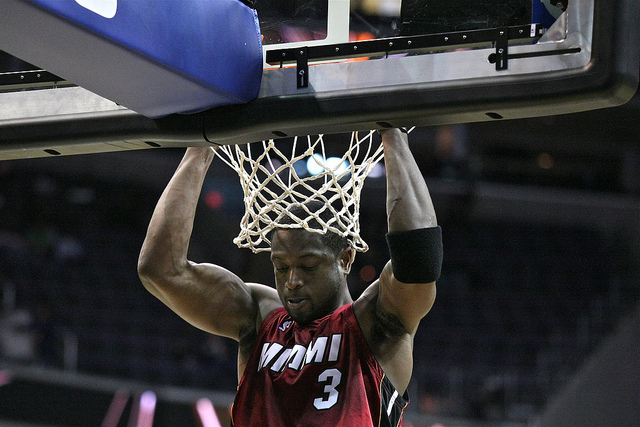 The Indiana Pacers gave the Miami Heat everything they could handle on Wednesday night at American Airlines Arena. The Pacers led by as many as 15 in the third quarter, and in the end they just didn’t have enough to overcome the powerful defending champions, falling to the Heat 97-94. It was a very energetic and playoff-type atmosphere as the two heavyweights from the Eastern Conference landed haymaker after haymaker on one another.

Miami was strong enough both defensively and offensively to handle Indiana’s length and defensive prowess, showing clearly why they are the two-time defending NBA champions. The big three for Miami were seemingly unflappable under pressure late in the game as Indiana held a six-point lead with four minutes remaining in the contest. Dwyane Wade finished with a season-high 32 points, LeBron James with 24 and Chris Bosh with 15. Defensively, they held Indiana to just under 44 percent shooting from the floor and made all the necessary stops down the stretch to hand Indiana their second loss in a row.

The Pacers were led by Paul George, who had 25 points and did a much better job dealing with the double-team that Miami defended him with throughout the game. David West finished with 23, and really played an excellent game. Roy Hibbert got into foul trouble and was really a non-factor in the second half, finishing the game with six points and two rebounds. The Pacers again struggled with turnovers against the Heat, committing 16 of them by the final horn. Last June, in the Game 7 beatdown at the hands of Miami, the Pacers had 19 for the game. It’s something that seems to haunt them on the road against good teams.

Losing two straight for the first time this season, Indiana must regroup quickly before the Houston Rockets come into Bankers Life Fieldhouse on Friday night for their only visit of the year. The much maligned Dwight Howard is putting up monster numbers next to James Harden for the Rockets. Dealing with Houston’s length and athletic front line will be a tough test for the blue and gold.

The Pacers are in the midst of dealing with the challenges that a long season brings. There shouldn’t be any panic in the locker room, but it’s difficult to firmly put a finger on the root cause of the problems they have been experiencing the past few games. One could be tempted to pigeonhole each game and deal with them individually, but there seems to be a bigger problem than just micromanaging the losses.

Turnovers, the lack of energy, and the lack of defensive assertiveness seem to be the biggest issues during the last 10 quarters. If Indiana can come to terms with those problems, they could end this slump and return to the level of play that has given them the best record in the Eastern Conference. The first test will be Houston on Friday.