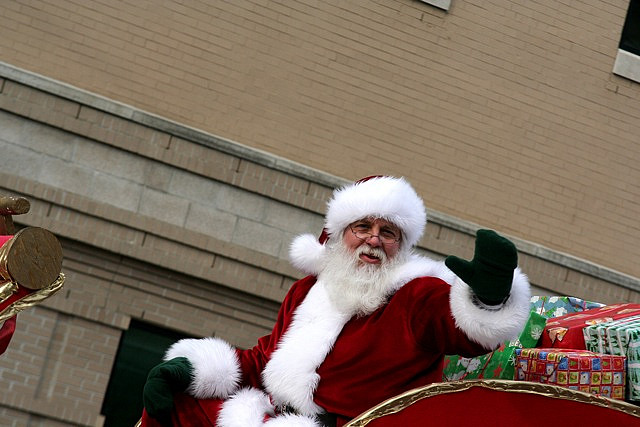 I haven’t been very good this year and I’m too old and too Jewish to even be talking to Santa, but if you’re listening, sir, please perform for me but one miracle and fix NBA 2K14.

I know, it’s a good game already and I’m spoiled for even asking. But Nick, as you can tell from having watched me over the last 20 something years, I’m a perfectonist, and damn it, I expect more out of this oft updated but seldom upgraded basketball sim. Just these eight wishes, Santa. Please. I beg of you.

I just want to inbound the basketball and play 2K. Why do the automated refs refuse to give up the basketball? Do they feel like they’re part of the action by holding onto the ball and staring into virtual space? The designers certainly didn’t put this feature in to add to the game’s realism, because if they were concerned with that, there wouldn’t be only five people in the stands cloned thousands of times. Anyway, 90 percent of the extended ref holds occur just as I’m gaining some momentum, and although I always enjoy a good excuse for failure, it’s simply too annoying to be left in the game. Claus, remove.

I know I’m hitting square, but I can assure you it was not on purpose. You see, for some reason the steal button is the same as the shoot button, so as soon as I get the ball, I immediately chuck it at the opposing hoop like I’m trying to win $20,000 at halftime. Much like 99% percent of the aforementioned contestants, my feelings of unbridled excitement are quickly replaced with a deep and enduring self loathing. The worst part is that it could all be fixed so easily. Just change the effin’ controls! Steal and shoot cannot share a button, much like clumsy Middle East simile.

There’s a difference between jumping to secure a rebound and jumping to tip in a shot, and that difference partially explains why I’m in an abusive relationship with my controller. Believe it or not, 2K, I don’t want to engage in an endless stream of jumpy tips with Roy Hibbert. I’d simply like to rebound the basketball, dunk said basketball, and feel pride. Santa, please. Step in here.

They’re just awful. Inept on offense, SLOW, and yet, somehow always effective when being used by the computer. It’s enough to make a sane person ask me to please calm down I’m scaring them. I’d really like to use Dwight Howard, Blake Griffin and LaMarcus Aldridge without turning the ball over every other possession, Christmas Jesus. Oh, how I wish I could.

Staying inbounds should not be a triumph

Being forced out of bounds by an opposing player while taking the ball up the floor is referred to as “veteran savvy'” in my playing circle, and while its kind of fun to do on defense, it shouldn’t be so easy that it happens several times a game. Frankly, I doubt it’s happened more than once in an entire NBA season. If anyone disagrees with this wish unto Santa, I urge you to play a game against the Clippers. I’ll wait….

Coaches deserve their own suits

Considering the game is pretty much glitch free at this point, you’d think the design team would have gotten around to giving the coaches different suits. Well, you’re wrong. Every coach wears the same brown suit, and it is not flattering. Come Christmas morning, I wouldn’t mind seeing different suits with fun ties. And casual Fridays on Friday. If none of these are possible, I’d settle for Tom Thibodeau with a seasonal pin on his lapel.

Believe it or not, I don’t care what happened in the Pelicans-Kings game (sorry, Steven Covella). Wouldn’t it be nice if instead of a wave of meaningless scores, the game knew your favorite team and gave you a detailed stat sheet of their game during the halftime of your virtual game? At the very least, it’d save you the step of pulling out your phone, and that is what I want, oh Santa.

Reverse the outcome of that game I lost in overtime