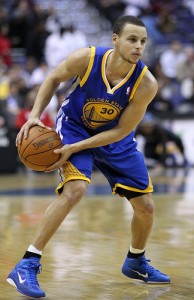 Image of courtesy of Keith Allison.

A Stephen Curry triple-double carried the Golden State Warriors to a 115-86 victory over the visiting Phoenix Suns on Friday night. The 29-point loss was Phoenix’s largest loss of the season, and their largest since a 31-point loss to the Minnesota Timberwloves in March. The win moved Golden State to 18-13, and dropped Phoenix to 17-11.

The Suns were in it after 12 minutes; the Warriors led by only six after one quarter, and their lead was trimmed to two with 7:35 to go in the first half. But a 10-0 burst engineered by Klay Thompson (five points, one assist over the run) expanded the lead to 12, and after Steph Curry scored seven points over the final five minutes of the half, the lead was at 19. The Suns failed to cut the lead to fewer than 16 in the third quarter, and trailed by at least 24 the rest of the way.

As mentioned earlier, Curry had a triple-double in this one, leading all players with 16 assists (half of his team’s total) and 13 rebounds, and throwing in 14 points for good measure; if he had been his regular self in terms of scoring, the Dubs would have won by 40. Klay Thompson led all scorers with 21, and Harrison Barnes and Draymond Green combined for 22 points off the bench. For the Suns, they were led in scoring and rebounding by P.J. Tucker, who had 11 and 12, respectively. Eric Bledsoe and Goran Dragic shot a combined 6-for-18 for 15 points, and Gerald Green cooled off a bit on Friday night, converting only one of his five three-point attempts and scoring seven points on nine shots. Finally, the Warriors outrebounded the Suns 56-41.

It was a rough night for the Suns, but these kind of games happen to every team, especially a young one like Phoenix. The good news is this heavy loss only counts as one; the Suns are still sixth in the West with their 17-11 record. It took the Suns 18 games to hit 11 losses last season; this year, it took 28 games to reach that mark.

The Suns now return to Phoenix to face the Philadelphia 76ers on Saturday night.