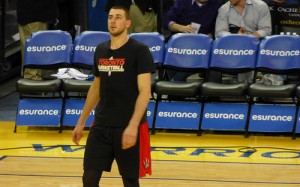 In one of the uglier games you could have watched all season, the Toronto Raptors went into the Big Apple and came back from a double-digit deficit to defeat the disappointing New York Knicks.

The Raptors were lucky that Knicks superstar Carmelo Anthony was not in the lineup in last night’s game. Anthony is day-to-day with a sprained left ankle and he was desperately needed in this one.

This was the first time Andrea Bargnani of the Knicks faced off against his former team in the regular season and looked to show the Raptors why they shouldn’t have traded him. Early on, Bargnani looked great, scoring 14 points and grabbing nine rebounds in the first half. However, his strong play did not continue the rest of the game. He had four points and three rebounds in the second half on an abysmal 1-for-5 shooting from the field and had a costly turnover at the end of the game that sealed the deal for Toronto.

On the other side of the court, Raptors center Jonas Valanciunas had himself a career night. He dominated former NBA Defensive Player of the Year Tyson Chandler all game, scoring 16 points and tearing down a career-high 18 rebounds on a fantastic 7-for-11 shooting night from the field. JV was sloppy early on, turning the ball over four times in the first half, but had zero in the second half, playing extremely smart, but at the same time aggressively. Kyle Lowry was finding Jonas over and over again, something that wasn’t happening all season. If that continues, expect to see Valanciunas have these types of games on a regular basis.

Another Raptor who had a great game was the aforementioned Lowry. He had 15 points, 11 assists and four rebounds. The numbers don’t jump out at you, but that’s the thing with Kyle. If you don’t watch him play and just read the box scores, you might think he’s a below average player. You have to see him play to really get the full Lowry effect. He drew two charges tonight early on and set the defensive tone right away for the Raptors, that’s the kind of thing you can’t see in box scores. His name was mentioned many times in trade talks over the past couple of weeks, most notably with the Knicks, and after this game Knicks fans might want James Dolan to change his mind on vetoing a trade that would send Kyle to the Knickerbockers.

The last Raptor who had a big impact in this game was DeMar DeRozan, finishing 25 points and four rebounds on 7-for-13 shooting. He had 10 points at halftime and wasn’t much of a factor in the game up to that point. He came out of the locker room guns blazing, making tough shot after tough shot, showing why he’s the number one option for this team on offense. DeRozan has improved so much from his rookie year that it’s not surprising when he drops 25 points in a game. It’s almost expected every game now and so far DeMar is playing well enough to deliver those points on a consistent basis.

Next up for the Raptors are these same Knicks who they face tonight in Toronto on the second game of the home and home. New York is more than likely going to be without Carmelo again so look for Bargnani to step up in this one in the first regular season game he has played in Toronto since being traded.