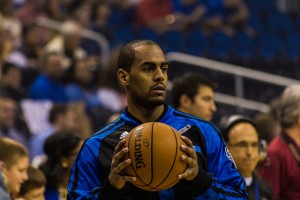 Losers of nine out of their last 11 games, it seemed as though things were starting to get away from the Orlando Magic. Friday night they faced the Detroit Pistons, who held an 8-6 road record coming into the contest, coming to the Amway Center to take on the struggling Magic. Unfortunately for the Pistons, they were unable to churn up some more road magic, falling in Orlando, 109-92.

The Magic, arguably, had their best complete game of the season against the Pistons. From scoring the ball to getting stops defensively, the team looked to be clicking on all cylinders from the start. The lead flip-flopped some early before Orlando took a five-point lead after one, never looking back. The Magic saw their lead jump to 22 at one point before settling in and winning by 17.

The Magic brought a balanced, consistent offensive attack on the night. Arron Afflalo, yet again, led the team and all scorers, finishing with 23 points. Nikola Vuceivc, facing one of the most exciting young centers in Andre Drummond, had success as well, tallying 20 points to go along with a team-high 11 rebounds. Tobias Harris and Victor Oladipo both contributed 16 points, with Oladipo finishing with a career-high 11 assists. Glen Davis rounded out the Magic men in double figures, finishing with 14 on the night.

Detroit on the other hand looked lost and confused throughout the night on both ends. Point guard Brandon Jennings finished the game with a team-high 21 points, but only scored three after the halftime break. Backup Will Bynum came in and gave the Pistons good minutes off the bench, finishing with 18 points. The aforementioned Drummond finished with 10 points and a game-high tying 11 rebounds.

Consistent Performance
Since their early three-game winning streak, the Magic have struggled to consistently put forth complete games. Friday against the Pistons, the team finally put together a full 48 minutes and it paid off. They jumped on Detroit early and never really looked back, throwing the knockout blow in the third period when the lead ballooned to 21. Multiple guys, including Jameer Nelson, preached after the game about how important this game was and how they were able to turn their defense into offense. However, the question remains if they can put it together for multiple game stretches, we’ll find out Sunday against the Atlanta Hawks.

Afflalo’s Sizzling Play Continues
For the fifth straight game, Afflalo scored at least 23 points and spearheaded the Magic’s offensive attack. He shot lights out yet again, going 9-for-11 from the field and 2-for-2 from three. Afflalo’s play has garnered respect across the league from coaches and players, and he’s clearly playing the best basketball for the Magic this season. One topic that continues to be brought up to both Afflalo, teammates and coaches is how deserving he is of an NBA All-Star spot. If his play continues like this, it’ll be hard to not put him on the team.

Oladipo Shows Improvement
The start of the year has been a roller coaster for the rookie guard from Indiana. He’s shown flashes of brilliance, while struggling mightily other nights. Friday brought a night of brilliance for Oladipo as he was able to have a career night of sorts. He notched his first career double-double, and looked calm and poised running the offense. His 11 assists were a career-high, and his improvement running the offense is a welcome sight to the young Magic. It’s a night-to-night thing with him right now, but if he can string together performances like tonight, it’ll be hard to not give him NBA Rookie of the Year honors.

Too Many Offensive Rebounds
The one main negative for the Magic was the amount of second chance opportunities they gave up. While they were playing one of the biggest and most physical frontcourts in the entire league, the 19 offensive rebounds given up is a concern. They’ve had problems throughout the season with teams crashing the offensive boards, but have also had nights where they’ve grabbed every rebound possible. It’s up and down for the team, but if they continue to give up that many second chance opportunities, it will come back to bite them.

Quotable
Jacque Vaughn on being focused for 48 minutes…

“I think it was a challenge for our guys. We go in seven at the half, and I think our guys realized on the way out there was going to be a chance for this team- Detroit to either crawl back into the game or for us to extend the lead and that comes from just being in games and experiencing and sometimes experiencing them on the losing end and understanding what that feels like. So, I think that coming out at halftime we had a really good approach.”