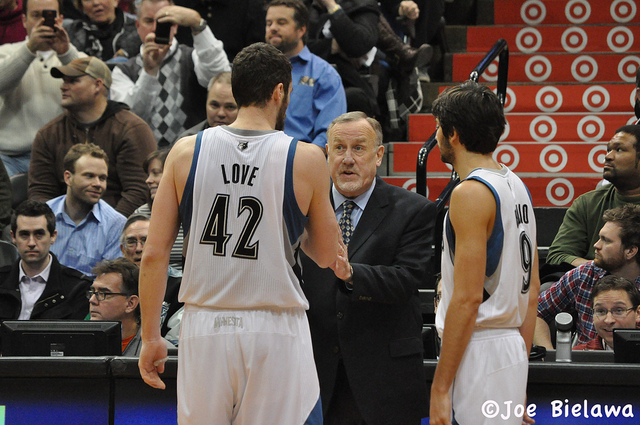 Kevin Love, the star of seemingly every Minnesota Timberwolves narrative, scored 33 points to go with 15 rebounds during Minnesota’s 117-95 win over the Milwaukee Bucks on Saturday night. In what has been almost a nightly ocurence, Love turned in one more MVP-worthy performance. After missing nearly all of last season with an assortment of injuries, Kevin is clearly healthy again, and is doing everything in his power, outside of playing defense, to turn the Timberwolves into a playoff contender.

Kevin Martin had 20 points including four three-pointers and Nikola Pekovic chimed in with a double-double for Minnesota, a team still trying to assert itself as a legitimate playoff contender in the Western Conference.

Khris Middleton led Milwaukee with 23 points, while O.J. Mayo scored 19 points off the bench for the Bucks.

In something of a role reversal given his recent recovery from a broken hand, Larry Sanders started in place of the injured John Henson, and scored nine points with 10 rebounds for the Bucks, who are vying for little more than the first pick in the 2014 NBA Draft.

The game was relatively competitive to start, with the Bucks trailing just 34-28 at the end of one quarter. However, Minnesota started pulling away in the second quarter, taking a 64-55 lead into halftime. Thereafter it was all T-Wolves all night, as the team came out of the half on a 14-0 run and never looked back. Despite scoring just 14 total points in the fourth quarter, it was clear that the Timberwolves had already started playing with the cruise control actively engaged.

The loss dropped the Bucks to an NBA-worst 6-24 (.200) record, albeit in the Eastern Conference where only three teams are currently sporting winning records. The Timberwolves, on the other hand, brought their record back to .500, or ninth best in the West.