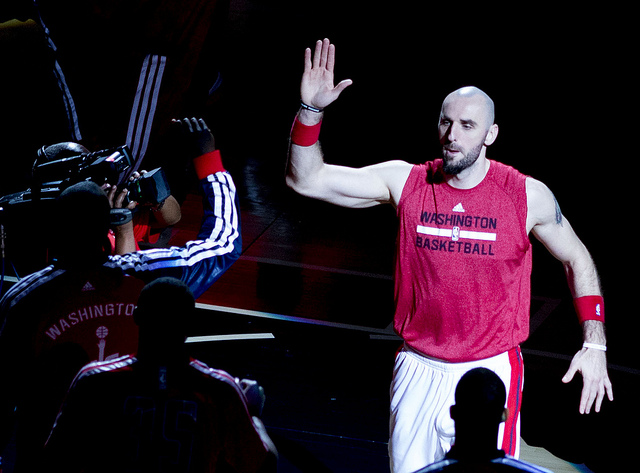 Over the last decade, professional basketball has become a truly international sport, bringing in players from all across the globe. And diverse though it may be, the fact remains that the bald are a grossly under-represented minority in the NBA. To pay tribute to these brave pioneers, we here at Baller Mind Frame have created a roster of the league’s finest bald athletes.

Point Guard – Jarrett Jack
Sure, he may be suffering a dip in assists, field goal percentage and rebounds, but damn it, he’s bald and the second best option was Chauncey Billups. In what’s been a hectic and by all accounts awful season for the Cleveland Cavaliers, Jarrett has provided some stability with his consistent play; his even-keeled nature has even extended off the court, where he defended Andrew Bynum in the ongoing “wow, Bynum’s a huge asshole” saga. Rather than piling on the criticism, Mr. Jack took the high road and chalked Bynum’s bad attitude up to “marching to the beat of [his] own drum.” Classy move, Jarrett.

Shooting Guard – Jodie Meeks
These Los Angeles Lakers are not what Jodie signed up for, but the dude has handled it in stride and put up numbers to boot. He’s currently on pace for career-highs in three-point percentage, points per game and assists. The youngest of the league’s all bald team, Jodie has occasionally been known to sport a fine dusting of hair atop his perch. However, the most recent picture I saw of him displayed full-on baldness, so he qualifies.

Don’t give in to the temptations of your hairy brethren, Jodie. Stay strong.

Small Forward – Ray Allen
After hitting what might be the most clutch shot in league history, and more importantly, putting in over a decade of professional baldness, Ray Allen has earned his starting role in this storied lineup. Yes, there’s still some animosity towards him due to his untimely departure from the Boston Celtics, but it’s important to remember that did not happen because he doesn’t have hair. I know, Jason Terry and Kevin Garnett did the same thing, and they too are bald, but what about Paul Pierce? That’s right, hair. Not good hair, but hair nonetheless. Justice served.

Power Forward – David West
The Indiana Pacers are looking pretty dangerous this season, and it’s easy to forget that David West is a big reason why. I honestly never thought I’d love a D. West more than Delonte, but well, here I am. According to David’s Wikipedia page, he is an accomplished tuba player and enjoys making mix-tapes for his teammates. I can only assume he sneaks one of his tuba tracks onto every playlist, and days later with subtly asks his pals if they enjoyed that brassy joint.

Center – Marcin Gortat
The Washington Wizards turned some heads in the preseason when they acquired Gortat from the Phoenix Suns, and rightfully so. Over the last few years he has proven himself an able defender and rebounder that can score when he needs to. Oh, and in case you were wondering, his first name is pronounced mar-cheen. Only by spreading awareness of this fact can my nickname for the Polish seven footer, Cheen-Gor, catch on.

Guard – Chauncey Billups
Chauncey may have been starting on this team only a few years ago, but age and injuries seem to have finally caught up to the veteran baldman. Still, I’d rather have him take a game winning shot than most players in the league, and I sure as hell would rather have him on my bench than Derek Fisher. No offense, Derek, you have represented the bald community well and for that you are guaranteed unlimited Triscuits in the afterlife.

Guard – Jerryd Bayless
I’ve irrationally enjoyed watching him play for years, and now that I’m left with a choice between Keith Bogans and he, I can safely and emphatically say he without fear of ridicule. Jerryd can ball, and the fact that he’s only a year older than me horrifies me beyond anything I can fathom.

Forward – Carlos Boozer
Are Carlos and Jerryd cousins? They sure look like it. Anyway, the league’s number one amnesty candidate has been holding the fort down as best he can in D-Rose’s absence, and will no doubt have plenty of suitors should the Chicago Bulls cut him loose at season’s end. Okay, if you still don’t see the Jerryd resemblance, can you at least agree that he looks a lot like Bald Bull from Mike Tyson’s Punch Out?

Center – Kevin Garnett
Kevin, I know you’re having second thoughts about heading to Brooklyn, but you can rest easy knowing that your place on the All-Bald Squad comes free of worry. All we require is the monthly membership fee and an annual appearance at my niece’s birthday party. What membership fee, you ask? You should have read the fine print. We own you now, Kevin. We own you.