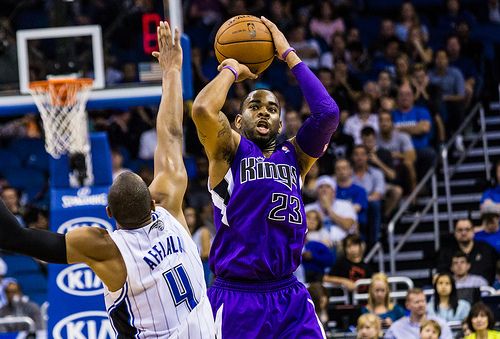 Marcus Thornton’s game is volcanic. For prolonged stretches of time, it slumbers, but any given night the hardwood plates beneath him can shift just enough to set him off.

The Sacramento Kings’ were without their top two scorers, but Thornton alone nearly managed to make up for the 43-point void they left behind. The orange ball with which Thornton unleashed offensive devastation dripped magma at his touch. Shots left his hands to the cheers of 17,000 fans and hit the floor with nets aflame in their wake.

His offensive explosion came just two nights after Thornton posted a quiet four points in Houston, the game in which both DeMarcus Cousins and Rudy Gay suffered injuries. Sans Cousins and Gay, Michael Malone looked to others for scoring. While he said he never expected a 42-point outing of Thronton, Malone demanded he shoot at will.

“I told Marcus Thornton tonight, I said, ‘Listen, I don’t care if you miss every shot that you take, but I’m going to be pissed off if you don’t shoot the ball tonight,’” Malone said. “I needed him to be aggressive. I didn’t care if he missed four or five in a row, as long as they were good shots.”

Ultimately, though, the cold-blooded Paul George was able to withstand Thornton’s heat wave, converting a four-point play to send the contest into overtime.

Malone and some players implicitly disagreed with the foul call afterward, but were explicit in describing the shot’s impact in securing the Indiana Pacers’ eventual 116-111 win.

“No doubt (it affected players’ mindsets). I think it did. We all knew that we had the game and that hurt us,” Isaiah Thomas said of George’s shot’s effect on the Kings’ psyche entering overtime. “You can say it didn’t or not, but I felt like that hurt us.”

Sacramento walked away with a disappointing loss, considering it held a lead as large as 17 points, but having such an advantage to lose was only possible because of the incendiary play of its backcourt.

The Kings (15-27) started slow, but about five minutes into the game, Thornton honed in. His only thought then was to “keep it going, keep it going,” he said. By the end of the first quarter, Thornton had 22 points on 9-12 shooting and Sacramento had an 11-point lead.

Thomas, in close proximity to Thornton, caught fire and the two of them worked together to set loose a scoring barrage upon the Pacers (34-8). When Thomas wasn’t getting to the line or knocking down key shots himself, he was penetrating, getting into the heart of the Indiana defense before launching the ball out of a bundle of defenders to a wide-open Thornton.

Near the end of the night, the two weren’t as in-sync, instead alternating flurries, which allowed for the Pacers to throw George, one of the league’s top perimeter defenders, on whichever had the hot hand. The All-Star forward’s length gave the smaller Thomas and Thornton problems.

“Paul George is a good defender,” Thomas said. “He’s long and uses his length. I think that cut off a lot of Marcus’ opportunities to score. But at the same time we have to try to find him, especially since he was the hot hand.”

Aside from Thornton and Thomas, however, the Kings were ice cold. Despite its backcourt duo’s combined 80-point performance, Sacramento shot only 38.6 percent as a team.

Nonetheless, with the exception of poor late-game execution, the Kings were satisfied with their effort against the team with the best record in the NBA.

All the Kings need is kindling, Thornton will bring the fire.