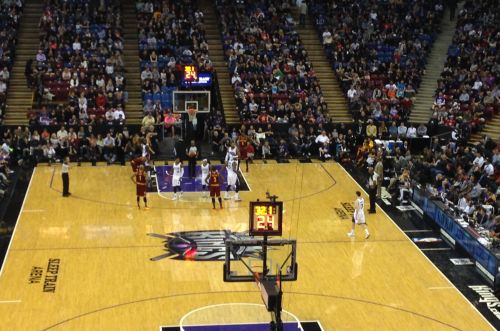 The Sacramento Kings were in search of consistency. In a season that it’s spent much of near the bottom of the league, Sacramento has had consistency, but not the kind anyone had hoped for.

The Kings turned dominated for three quarters, but late in the fourth the Raptors made a run, getting stops and knocking down some crucial threes to close the gap.

“Steve Novak is probably one of the best three-point shooters in history,” Gay said with a smile. “They made their last surge – they had to. They had their backs against the walls, threw up some prayers  and a lot of them went in. Luckily we had that 20-point cushion.”

With new NBA Commissioner Adam Silver looking on, Sacramento got out to a quick double-digit lead in the first quarter and continued to build upon it as the game wore on.

DeMarcus Cousins and Isaiah Thomas troubled the Raptors with the pick-and-roll from the outset, the former overwhelming his matchups throughout the night. Cousins returned from a left ankle sprain Monday with great production and, despite some pain in his right foot, Wednesday wasn’t much different; he finished with 25 points and 10 rebounds and knocked down a key bank shot down the stretch. The Kings top trio – Gay, Thomas and Cousins – finished with 72 combined points.

Gay downplayed the importance of beating his former team, instead stressing the importance of getting a second straight win regardless of who it was against. Cousins, meanwhile, said that competing against former frontcourt teammates who are familiar with his game presented a challenge.

The win marks just the fifth time this season that the Kings have won consecutive games, and, like Monday, it came against an Eastern Conference playoff team.

After recent success at home, Sacramento now hits the road, heading to the East Coast where they’ll try to sustain their streak against Eastern Conference opponents. The Kings’ four-game road trip will take them into the All-Star break, a stretch that Malone hopes his team can exploit.

“You want to go on the road feeling good about yourself, playing the right way. Obviously the defense against Chicago was unbelievable and tonight our defense was fairly good at times,” Malone said. “It’s a great time to steal games in the NBA, right around the All-Star break. A lot of teams will check out mentally around the break, so our whole mindset is: this is a four-game business trip.”