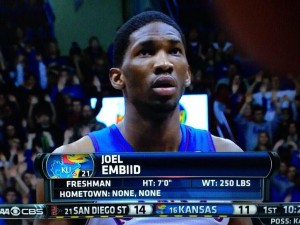 Kansas center Joel Embiid boarded a plane on Sunday and flew to Los Angeles, seeking a second opinion from a back specialist in the area.

Embiid, sidelined by an undisclosed lower-back injury, was to meet with a doctor Monday morning before returning to Lawrence. If it sounds ominous, well, that’s the nature of back injuries. But Coach Bill Self tried to soothe any concerns Sunday, saying the trip to California was planned since Embiid was shut down for the last two games of the regular season.

“It’s the same game plan we said we would follow,” Self said late Sunday evening in a brief conversation with The Star.

The injury, though, is certainly cause for concern as No. 8 Kansas prepares for the postseason. Self said Sunday that Embiid’s injury is more “significant” than a lower-back strain, the term used last week when KU announced Embiid would miss regular-season games against Texas Tech and West Virginia. Self wouldn’t disclose the specific lower-back injury or condition plaguing Embiid, but he remains hopeful Embiid will be in position to be healthy for the NCAA Tournament. The Kansas City Star

Back injuries and big men are a bad combination. It’s incredibly strange for someone to downplay the significance of an injury to an athlete, but also say they might not be available for the biggest tournament of the year. This bears watching considering Embiid’s recent ascent to the top of NBA draft boards. – AL