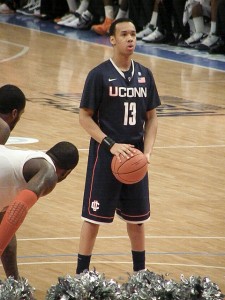 When the dust finally settled in a few nail-biting moments the NCAA tournament’s East regional, the Michigan State Spartans and the Connecticut Huskies were the last two teams standing. The Spartans overcame a very tough Virginia Cavaliers team 61-59, while the Huskies hung on for an 81-76 win over the Iowa State Cyclones. Fourth-seeded Michigan State will take on the seventh-seed Connecticut on Sunday, March 30, to decide who goes on to the final four. Here’s how both teams made it to the Elite Eight:

Technically, this was a home game for the Huskies being that the game was played in New York’s Madison Square Garden, and we all know how well UConn plays in the Garden. This game was no exception as UConn head coach Kevin Ollie’s squad got off to a hot start behind American Athletic Conference player of the year Shabazz Napier. He started the game by draining four three-pointers. But Napier would only add one more field goal the rest of the game. It was all good though because his hot hand allowed junior Deandre Daniels to do damage on the inside as the Huskies opened up a 49-32 lead in the second half. Daniels led UConn with 27 points and 10 rebounds.

Down by 17 and without one of their top scorers in Georges Niang, who suffered a broken foot in their tournament opener, the Cyclones started to show some life and make a game out of it down the stretch. They narrowed the gap to 67-63 as they approached the two-minute mark but a late three-pointer from UConn’s Niels Giffey found Iowa State back down by seven with under a minute left. What really ruined the Cyclones’ chances at a spot in the Elite Eight was the balance of the Huskies. Even though the Big 12 tournament champs got a game-high 34 points from Dustin Hogue, they could never really clamp down defensively on the Huskies who were able to get scoring from the post and the perimeter. Down the stretch, Connecticut was able to make free throws, shooting 20-of-22 from stripe. The Cyclones were also hurt by poor play from their conference’s player of the year, Melvin Ejim, who finished 3-of-13 from the field with a paltry seven points.

A year ago Connecticut was banned from postseason play due to low scores on the NCAA academic progress measure but the Huskies are right back in the thick of things and making some noise. They pose a serious threat right now to Michigan State, whom many are picking to win the big dance. If UConn is able to have this same balance and poise against the Spartans they will definitely have an opportunity to ruin the brackets of anyone who hasn’t burned them yet. 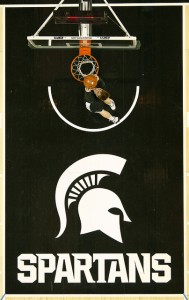 Tom Izzo’s Michigan State Spartans (29-8) marched on to the Elite Eight with a 61-59 victory over top-seeded Virginia. It was easily one of the best defensive performances of the tournament as the Cavaliers brought in one of the nation’s best defense. However, the Spartans rose to the occasion and held the Cavs to 35 percent from the field. Brandon Dawson paced Sparty with a double-double (24 points, 10 rebounds) as they held on for the two-point win down the stretch. This was a tight game that Izzo’s squad controlled for the most part in first half, taking a 31-27 lead.

When the second half started, State turned the ball over several times and missed their first eight shots. Virginia took advantage by going up 38-34, and from that point on the game went back and forth until the Spartans went on a 13-2 run. The Hoos would follow up with a 7-0 run of their own to tie the game at 51. Michigan State followed that up by getting a three-pointer from Adreian Payne to put them up for good. A parade to the free-throw line would follow as Virginia tried to buy time to make a comeback. The only problem was every time the Cavs inched closer the Spartans pulled away by making their free throws.

It was a great season for the unappreciated Virginia Cavaliers, who finished the season 30-7. They were the regular season and tournament champs of the ACC and touted one of the best defenses in the country. With their grind-it-out style of play they were able to have one of their best seasons ever. Nevertheless, the Cavs did not have the respect of the average college basketball fan. Nobody seemed to believe in them all season even when they earned a one-seed in the tournament; many picked Michigan State to win the East bracket. And while the Spartans proved their worth in the win, Virginia was definitely no slouch.