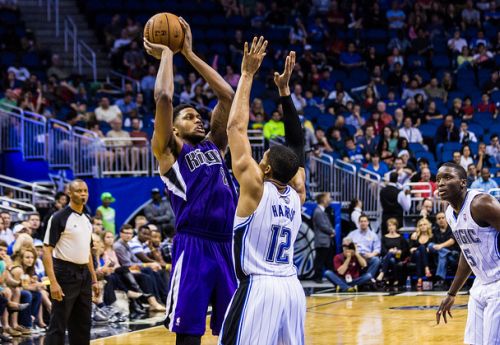 Offense came easy to the Sacramento Kings against the decimated Los Angeles Lakers on Wednesday, but they found consistent defense more difficult to establish.

Sacramento had five players in double figures, three of which scored 20 points or more, but ebbs and flows defensively allowed for Los Angeles to make runs and stay in the game. Strong third-quarter performances from Ray McCallum and Rudy Gay put the Kings out in front by a wide margin entering the fourth, but their defense crumbled late.

On the whole, the Kings put together one of their better defensive performances of late, holding the Lakers to 38.5 percent, but lost focus for spurts, which prevented them from pulling away. Late in the fourth quarter, as Los Angeles gained momentum offensively, Sacramento failed to get back in transition. The Lakers exploited it and closed the gap to a single possession with just over a minute to go.

The Kings, though, managed to counter the Lakers’ late comeback attempts with their offense. DeMarcus Cousins and Gay attacked the paint late to secure a 107-102 win that managed to become an uncertainty in the final minutes.

“Let’s just call it like it is: we did an awful job in transition tonight,” Malone said. “Overall our defense was pretty good … but 32 transition points is a joke. We put them back in the game on a made free throw; they throw the ball up the court, we don’t communicate and (Cousins) has to close out Nick Young and picks up his third foul. Very tough (for Cousins) to get into a rhythm like that.”

Cousins’ foul trouble disrupted the flow of his game throughout the night, but McCallum and Gay had no difficulty establishing an offensive rhythm.

As the game went on, Gay’s jump shot attempts decreased as his post-ups increased. The Lakers have been crippled by injuries this season and their wing depth was lacking to begin with. Wednesday, Nick Young was forced to guard Gay for much of the game, a mismatch that Gay continually looked to exploit.

For a long stretch to start the fourth quarter, Gay seemed to post-up Young every time down the floor. Young was overmatched and Gay got plenty of good looks down low. On the rare occasions he was parried from the paint, Gay, who finished with 31 points, was able to hit contested jumpers over his defender as the shot clock expired.

Whereas Gay took a quarter or so to catch on, McCallum proved a potent option from the game’s outset. In his fifth start in as many games, McCallum continued his successful run in Isaiah Thomas’ stead. Before the game, Malone said that Thomas’ thigh contusion is worse than initially thought, but McCallum’s play of late has made Thomas’ absence an afterthought.

McCallum was immediately aggressive, continually attacking the basket and taking what the defense gave him. He had 17 points in the first half, sparking a Kings run to take the lead before halftime, and finished with a career-high 27 points.

Afterward, McCallum noted that he made the mistake of not getting his shot up above the reach of New Orleans Pelicans bigs Monday. Wednesday, though, he said he adjusted and results followed. McCallum has had difficulty finishing at the rim this season, missing some point-blank looks, but routinely finished his drives Wednesday.

It’s just one product of McCallum’s study habits. He frequently mentions film sessions, which have been an instrumental tool in preparing him for his recent run of success.

“Every game I’m just seeing more and more out there. (I’m) just watching a lot of film, watching all my clips and seeing what I can do to improve each and every game,” McCallum said. “All year I’ve just been watching, watching, watching, learning and waiting for an opportunity. Sometimes opportunities only come once and you have to take advantage of it.”

Following the game, Cousins lauded McCallum’s progression and talked about the Kings’ improvements as a team. While Wednesday’s win wasn’t perfect, a team in Sacramento’s position will take it gladly and try to look at the positives while improving upon the negatives.

Cousins said he’s seen the team progress this season, which he finds encouraging.

“We’re still doing a terrible job in transition defense, but I like the growth we’re showing right now, even though it’s coming to the close of the season,” Cousins said. “It’s so exciting. Ben’s been playing incredible … Ray. Those guys are going to help us…. It’s going to help get this team to the next level.”