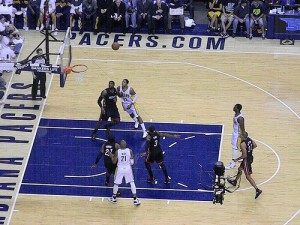 Lance Stephenson’s Indiana Pacers teammates delivered some strong rebukes Monday night after his comments created a potential distraction for his team and might have given LeBron James extra motivation before a vital playoff game.

“You know, Lance is young, and that’s a teaching point,” Pacers star Paul George said. “Sometimes you’ve just got to watch what you say. You’re on the big stage. Everything we say is going to be bulletin board material. It’s really going to have a powerful meaning behind it. We’ve just got to be smarter with situations and just voicing our opinion sometimes.”

Stephenson said prior to Game 4 of the Eastern Conference finals that James’ trash talk in the series was a “sign of weakness.” Stephenson admitted it was an ill-fated attempt to get in James’ head, which seemed to only further upset teammates who have grown weary of his on-court antics such as poor ball handling and friendly-fire rebound stealing during the season.

“When you make comments regarding trash talking and just being caught up between another player in a matchup, you got to bring it,” George said. “You got to bring it. I’m pretty sure a lot of people were going to be tuned in to see what Lance was going to do because of what he said.”

James, meanwhile, answered with his best game of the series, scoring 32 points with 10 rebounds and five assists in the Heat’s 102-90 victory to take a 3-1 lead. ESPN

I’m sick of the Indiana Pacers. Get these bums of the stage. There are several reasons I can’t stand watching them anymore, but among them is the propensity to talk so much about the infinite number of possibilities in this universe. Forget that! Just go do it! Take a win for goodness sake! Lance Stephenson in particular has been taunting LeBron James before he was even receiving real minutes on the court.

I have been frustrated with the Pacers for two entire months. Bench players are expected to give inconsistent performances on a regular basis, but even the All-Stars can’t be counted on to for anything.

Game 4 of the Eastern Conference finals marks the fourth time in the 2014 playoffs that Roy Hibbert has gone scoreless. There’s no reason to recount all the ways the Pacers are screwing up. I just wanted to express my disappointment.

Fans waited an entire year for an Eastern Conference Finals rematch and this what we got – the Heat playing the NBA’s JV squad on the way to another Finals. Every team in the Western Conference finals would have pushed the Heat much harder than the talkative Pacers. This just feels incomplete. The Heat are going to make their fourth consecutive Finals with the 2014 Indiana Pacers being their stiffest competition. No matter how it happens, four consecutive Finals is an impressive feat, I just wish the Heat had to sweat it out on the way like the other teams on that list. – AL